If you aren’t aware, Derek Beaulieu is a prolific artist who is extremely active within multiple art communities. No surprise then that his newest chapbook imprint No Press is just pumping out the jewels. What really makes No Press special is that Beaulieu curates work from big names and less big names he thinks [and thus, hopefully, you will think] should be known, will be known. I like this approach because it disregards bullshit hierarchical echelons: like ‘hey, if you like and know Sheila Heti and Charles Bernstein, you should trust me when I say you will also like and know Jacob Spector and Emma Healey.’ It is good to know such an active member of the community can draw in the big shots, not to strut but to share, and put them at the same table with future big shots. A straight-up chapbook pro-league maverick (fyi: he boasts 150 of them under his own name), Beaulieu is manufacturing through No Press a stunningly diverse collection of hand-bound chapbooks that range from marriage manifestos to concrete poetry, with the mandate to showcase innovative voices who – whether known or unknown – deserve to be heard.

So far lemonhound.com has received work from Jacob Spector and Jon Paul Fiorentino [reviewed below], “A Marriage Tract by Marjorie Stopes” by Sheila Heti, “4am” by Eryk Wenziak [visual poetry], “The Lungs: A draft” by bpNichol [!!], and “Untitled [for Billy Mavreas]” by Beaulieu. Most of these chapbooks are elegantly bound Japanese style with gold thread and quality paper. The others are graphically bold, minimal, black and white. Each chapbook carries an aesthetic flourish that makes them great gifts to give [and, hello, they be not expensive at all] and special artifacts to keep, so clearly are they made with care. 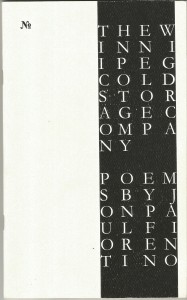 Jon Paul Fiorentino delivers an amuse-bouche from his upcoming book: impressive, the range executed in twenty pages, while still maintaining a singular voice [funny, clever, serious and sad] throughout. The poems are innovative and friendly. The opening poem PANTONE 185C begins in Montreal and is a sensitive meditation on the collective power of the 2012 student strikes. Halting sentence fragments build from an isolated protagonist bent on a phenomenological study of an ashtray and a park, into an unsentimental [and thus more powerful] realization of unity amongst strangers who all wear little red squares of Pantone 185c.

Somehow, the leap from Montreal to Winnipeg is not jilting. Perhaps because he gets the reader all fuzzy with the unexpected warmth of Pantone 185C. Regardless, the next suite – The Winnipeg Cold Storage Company – works a simple conceptual constraint and works it well, wherein he appropriates and manipulates text from Judith Butler’s Excitable Speech: A Politics of the Performative, by simply replacing words like language and gender with words like storage and Winnipeg. I first heard this suite at a reading, and didn’t like the constraint at all, I thought it was too slight. On the page, however, it works. A line like, “We hate that Winnipeg acts, and acts against us, and the hate we make is a further instance of Winnipeg…” is actually an eloquent paraphrase of how I hear a lot of Winnipeggers speak of Winnipeg, this nebulous hate [love] that only reinforces its power and presence in their psyches. Or, “After all, Winnipeggers enjoy some of the rights and obligations of citizenship, but not all of them” attests to how I’ve heard many Winnipeggers feel about Winnipeg’s citizenship within Canada [somewhat neglected] and their citizenship within the city [a decidedly proud, but self-deprecating identity].

The collection, though wide-reaching, is structured well. We move from Montreal, to Winnipeg, to a poem called GAG [too good to mention with such limited space], to a hilariously dark instruction manual for invigilating exams [“Shut the door. Lock the door. Wash the students.”] to the heart of the book called “Summaries.” The Summaries are Ikea-like diagrams of a shower nozzle [“Summary: Condensation and Replacement”], a ‘Marxist’ diagram of the poet at work [“Summary: Cultural Hegemony”], a fan [“Summary: The History of Sexuality”], and a flashlight [“Summary: How To Read”]. The Marxist diagram shows a Chris Ware-ish diagram of a man at his computer [an arrow: “poetry”] that beams out little electrical currents to the bourgeoisie [emblem: a car] and the proletariat [a clunkier car]. My favourite is the fan diagram, A History of Sexuality, because it plays with terminology that sounds [but isn’t] like Foucault: all parts of the dissected fan are named with this terminology – Procreative Socialization Regulaor, Hysterization Dispersal Unit, etc – and ends with the last piece, simply and aptly, ‘Screw.” A screw. 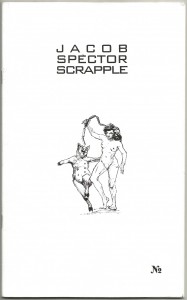 I am so glad No Press has published Jacob’s work. People need to read him. When I first heard Jacob read, I was stupid-stunned. Not because his was a capital P performance, something bombastic and alien-genius like hearing Christian Bok for the first time, because his performance was in fact marked by an understatement extreme. He was even wearing jogging pants. Simply there was no question to ‘my ear’ that his was an original voice, work that is tangibly heartbreaking, funny, and very intelligent. Though understated, still the lilt and tone of his voice matched his poems so well [often with readings, I hear such a divide between the content and the way the poet reads] he owned it, and I walked away thinking about the poems, and definitely wanting more.

I was pleased then, to find Scrapple in the Lemon Hound mailbox. What I like about his poetry is that it pulls no cheap tricks. That is, while sarcasm and irony aren’t absent, they certainly don’t predominate which is so, so refreshing from someone his age. His work favours words like ‘sedulous’ or ‘tumid’ over monosyllabic twitter-feed speak. That said, he doesn’t pontificate, either – the beauty of his vocabulary is well and modestly placed.

Jacob’s poems are complex and crafted, the dark humour used to great effect but not used as the crutch. No need. And because his poems are artfully composed, I get a strong sense of  his influences, a strong sense that he is a poet who reads. A lot. The Tradition is present, but again, implied gracefully, certainly not as pedantry. John Berryman is the influence I hear most in his work, in its odd riddles and word play, unexpected imagery and turns:

laying enclosed, massive in your nails.

She cried incredulously, kills with

Like Berryman, the syntactical liberties do not exclude or obfuscate so much as they enchant, regardless of the content [like divorcing yr wife]. While much of the poem’s ‘meanings’ clearly lay within the poet’s personal universe, it’s a cool universe regardless, and certainly not cold. “I obsessed tundra?” I get it, I can’t explain it, but I get it, love it. The richness of the assonance, dissonance, rhythm, off-rhymes and inner-rhymes of the second example [but all of which course throughout the poems] are sumptuous in the mouth and playful enough to enjoy working through. You have to work to read Spector’s poems, and I appreciate that. The poems are riddle-prayers, no matter the subject, and no matter how cleverly he treats his subjects, there is a constant undertone of weariness, a weariness which lends poignancy – a tolerable poignancy – and which makes all components all the more compelling:

up playing Sims 3 is living and he

wonders it at his life, a motion forward

A recipient wife. He swing it forward

Onto and more over onto his Sim, too

Much felt his own life.

The lilt and swerve of “He swing it forward / Onto and more over onto his Sim, too / Much felt his own life” is again so reminiscent of Berryman’s Henry-speak in Dream Songs.

Comparisons aside, Jacob Spector is an impressive young poet who is working my favourite combination: very weird and very talented. Apparently he has a thick binder full of poems about Blade Runner. A binder full of Blade Runner! So, watch out. 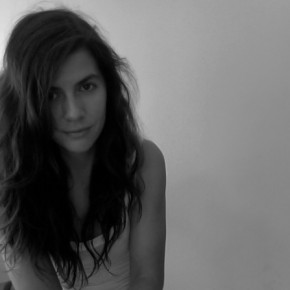 Laura Broadbent is reviews editor for lemonhound.com, a writer [her book is called ‘OH THERE YOU ARE, I CAN’T SEE YOU, IS IT RAINING?’], a teacher, and a book clerk.