To simply reiterate that we are haunted by the devastation that human consumption has brought upon the earth. To simply reiterate that we are haunted as well by the toll that the infrastructures of consumption have taken on the inhabitants of once thriving individual neighbourhoods. Who among us isn’t a little fatigued by these passive reiterations as they so often occur in poetry and prose? What kind of projects might respond more directly and immediately to the extreme environmental and social issues of our time?

Two recent works of interest use cartographic and surveying methods in order to give us clear-eyed portraits of vital ecosystems: in Everything Sings: Maps for A Narrative Atlas, cartographer Denis Wood puts forth twenty-six years of obscure maps of his Boylan Heights neighborhood in North Carolina. In Gibber, Canadian poet and interdisciplinary artist angela rawlings explores the bioregions around Queensland, Australia. A sensitivity to the overlooked, emotionally resonant particulars born out of poetic practice informs both of these projects, though the results resist categorical definitions. 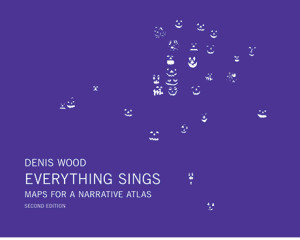 The core of Denis Wood’s message as a mapmaker in Everything Sings: Maps for a Narrative Atlas, is this: get rid of the roads, signage and practical markers of your typical map, and the mapmaker is impelled towards the modernist fissures that he would argue his particular medium missed out on. You get the fragmentary map; the impressionistic map; the lyric map; in his words, “we could write poems” (15).

His introductory essay cites Roland Barthes, Henry Chaucer, William Blake, John Cage, Lawrence Durrell, James Joyce, Ezra Pound, William Carlos Williams, Kenneth Patchen and others as models and sources of inspiration for his mapmaking work. He is a practitioner with a refreshing sense of the permeable nature of artistic boundaries, even if the iconoclastic tone of the essay suggests that he may possess an outsized sense of the singularity of his own vision. Wood is an essential contributor to the growing medium of ‘radical’ or ‘creative’ cartography; one that bridges elements of art, design, geography, activism and, in this case, literature.

The enthusiasm and belief that Wood has for this project, and the love and attention he has lavished upon this particular Raleigh, North Carolina neighbourhood for over two and a half decades, is infectious and inspiring. Tonally, it’s not hard to see how he could coax the platoons of design students and young cartographers necessary over the years to help him realize his vision. Like an ecstatic poet, he is prone to hyperbole, to litany, to wild associative leaps. Wood writes like the most inspiring kind of teacher; so much so that mid-way through the essay and under his spell, a hand-written map, with notes that his Aunt Marie made for him about the neighbourhood in earlier times, begins to take on the resonance of something out of epic verse:

2. Our second home—brick bungalow with steep steps—where I used to lock Jap in the closet

4. Little old country-style store where the men played checkers on the rail out front.

6. Our last home in Raleigh that was owned by the family in No. 7. They kept peacocks in a pen at No. 8. That we almost had in our back yard.

Wood has a tendency to mix metaphors throughout the essay. Terms like “poetics of cartography,” “narrative atlas,” and “the neighborhood as transformer” seem to be almost interchangeable with one another. This would be more of an issue if the maps themselves weren’t so successful in their passionate but acknowledgedly endless push to encapsulate the capital ‘E’ ‘everything’ about the concept of a neighbourhood—both their uniqueness and their universality.

As is often is the case in a book of poems, there is as much pleasure in considering each map on a random, case-by-case basis as there is in reading/looking at the book from start to finish. The make-nothing-happen-ness of some of these maps is what makes them appealing. “The Night Sky,” for example, is a 360-degree composite of horizon lines drawn by a collection of people lying on their backs at various points of the neighbourhood to look up at the stars. The result is a distorted looking black and white photocopy that could pass for the visible approximation of a teenager on mushrooms lying out in his/her front yard, believing they are sinking into the ground. As the previous list makes clear, “Hallucinations of Neighbourhood Teenagers at 11pm” would not be out of this atlas’ jurisdiction. Another map, “A Sound Walk,” is a series of horizontal lines with various markings denoting, among other sounds, “broom sweeping,” “small airplane,” or “kids drumming on wrought iron pillar.” This map has the aura of familiar writing or mindfulness workshop exercises, only with the added aesthetic bonus of appearing like alien sheet music on the page.

Ira Glass’s short intro effusively praises the pleasures of Wood’s atlas, but also suggests that they “aid no navigation or civic-minded purpose” (6). I disagree. “Absentee Landlords,” for instance, charts the distance that money travels out of the neighbourhood and into the pockets of landlords living elsewhere, as well as the number of properties owned by each absentee landlord. This is done in simple lines of various thickness (number of properties) and length (distance) that explode outward in a number of different directions. It gives the appearance of a warning label explosion, and serves as a stark reminder of the forces that drain a neighbourhood of its vitality. While it is as time-sensitive as anything else committed to paper, it’s the sort of map that would be useful for any neighbourhood at any juncture. It’s this kind of exercise that elevates Everything Sings from an aesthetic curio to an essential book. 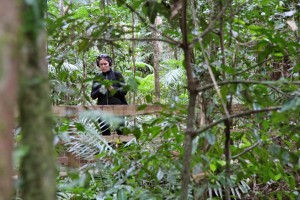 Gibber is available online, and is, in this recorded form, a kind of rhetorical ecosystem unto itself. It can be found here. The project invites the perceiver to engage in multiple sensory experiences through text, image and sound recordings.  This will oftentimes give the theoretical tug of an essay a companionable perceptual accompaniment. Consider the following passage:

Idioms, colloquialisms, and clichés, as forms of comparison that have entered oft-used linguistic use, may be contributing to contemporary ideological unwellness by normalizing comparisons that strip their signified entities (nonhuman-beings, ecosystem) of beingness. (“Until the Cows” 2)

This theory is tested out in the accompanying photo essay: cows tagged with bovine-related clichés such as “sacred” that appear appended to their physical being. It is jarring to see the materiality of the words themselves so near to the “beingness” of the cattle. It is the kind of re-appropriation of cliché and meaning that one usually ascribes to the best street art; only here one assumes that these taggings were applied via computer, giving it the added bonus of avoiding any of the ethical questions about disturbing a particular environment.

The sheer variety of praxis employed by rawlings makes Gibber a hospitable environment in which to think through its offerings. One can experience Gibber via a collaborative twitter project. One can head out into the field oneself with a list of instructions on “How to Converse With a Landscape.” One can methodically click through each of its Gibber’s subspecies in the interest of trying to understand the work as a whole. One can visit sections for the sheer beauty of the fallen leaf, or for the striking immediacy of a single word curled in a glass vial and buried partway in the sand. In the latter instance, the sand is photographed at such high resolution as to almost speak overtop of the word itself. It is another remarkable contrast, another reminder that in experiencing Gibber we are in the hands of a gifted poet.

Some of the more didactic texts closed me off from having a more naïve and open-ended brush with the poems (And here I speak to the “willful naïveté” that rawlings encourages in “Map of Naming, Map to Unknowing”). And the parts of Gibber that looked the most like traditional poetry were the parts I spent the least time in. The lineage and stanzaic structures in “Gibberbird,” for example, added little to the topography of sound already contained within the names of the birds themselves. I imagine the experience of hearing rawlings read such a piece—she has some of the most dexterous and gifted vocal ranges of any performer I know—would be a far different experience than I had reading it on the page.

Though rawlings devotes a great deal of text to describing the intended effects of the project, my most profound interaction with Gibber happened sideways, via a passage about metaphor from Robert Bringhurst’s essay “Prosodies of Meaning:”

Look where the morn in russet mantle clad/ peeps o’er the brow of yon high eastern hill is a different sort of metaphor, clad in the russet mantle of elaborated diction. What it means, at least in one sense of the word, is “Look, the sun is rising.” Now that is a real metaphor: the sun is rising! Go to the Department of Astronomy and Physics, where the mythtellers congregate these days, and they will tell you the sun is doing nothing of the sort. You are imputing rising to the sun, committing deviant predication: speaking in metaphor. So let’s try again to strip the metaphor away. Let’s reduce these two pentameters to one monosyllable: Sun! Now we have a pure, true, 24-carat metaphor. We haven’t spoken any predicate out loud, & yet a predicate is there. Sun!—and Bloomfield will confirm this—is a sentence. What the sentence Sun! means is The sun is up; the sun can now be seen; the sun’s presence is demonstrating itself in its wonderful, irrefutable way. The universe is glowing; we are basking in its light; Look where morn in russet mantle clad… And that is a metaphor as powerful as any we will get (238).

I don’t want to suggest that anything in Gibber is interested in attaining a codified mythological “[power],” “[purity],” or “[truth].” Indeed, as her statement on asemic writing makes clear, Gibber is an exercise in “immersion into a foreign bioregion.” It is not, as she states, a “landscape reading.” And yet I was struck by the process of stripping down high diction described by Bringhurst in this passage as it sidled up to my experience with parts of rawlings’ project; more specifically with the various sound recordings of local birds, insects and other Queensland wildlife that she includes under the headings “north” “south” and “beside.” In one way it seems rawlings had gone a step beyond Bringhurst’s “Sun!” with these recordings, and let, for example, the crickets’ own song stand for its song. This reading works insofar as we consider the entirety of Gibber as a kind of poem. I do. And I felt grateful to rawlings for having constructed one that allowed these other species to speak so free from reference, or from, in rawlings’ words, “the guise of a language ” (Museum of Sound 5). That said, the background photographs that accompany these specific field recordings, where we see her poised with her recording equipment and interacting with the surrounding environment, give, I think, an important trace of authorship—visible evidence of just how far into the physical field she has gone to explore her poetics; to return to us the document of an important place that might stand for the importance of all places.

A subtle but important challenge is leveled in Gibber, one that resounds across stylistic boundaries and categorical terminologies: How deep into the forest are you willing to go to speak to the things we stand to lose? In this respect, Gibber is a depth chart.

Bio: Nick Thran’s most recent collection of poems is Earworm (Nightwood Editions), winner of the 2012 Trillium Book Award for Poetry.