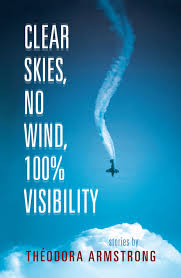 Théodora Armstrong’s debut short fiction collection, Clear Skies, No Wind, 100% Visibility, is an evocative collection set in British Columbian locales from Osoyoos to Vancouver to Quadra Island. In this ambitious first book, Armstrong shows a knack for taking surprising routes to satisfying places. “The Art of Eating,” a story that follows a struggling chef on his quest for a salary increase, ends up being about redemption and paternal love. “Mosquito Creek,” a novella-length piece about two teenage girls drifting apart, takes the reader through a drunken loss of virginity, a period of depression, a girl’s questionable relationship with her much older male teacher, and a suicide. The title story, which starts as a tale about a traumatizing plane crash, wends through emotionally charged memories before elegizing about squandered intellectual gifts and the emotional anaesthesia of a tired relationship.

These stories are rich, complex, and compelling. They are not – despite what the packaging of the book may tell you – anything like the work of Raymond Carver. Michael Christie, on the front cover of the advance reading copy, writes that Armstrong works in the “dirty-realist soil of Raymond Carver.” The blurb on the back suggests that Armstrong offers “language stripped bare.” Chad Pelley, on his website saltyink.com, writes that Armstrong has “a style of calculated minimalism fans of Raymond Carver will enjoy.” Regardless of what these sources suggest, Armstrong’s stories are not particularly terse or bare. Aside from a few working class characters and a bit of alcohol abuse, there is little of Carver here: no compulsive stylistic leanness, no remnant of his raw compassion, no residue of his tragic masculinity.

Unlike Carver’s, these stories are mostly quite long, and the collection itself is somewhat sprawling – 300 pages is long for a story collection, particularly a debut. The prose, though wonderful at times, is far from minimalist. “The Art of Eating,” for example, told from the perspective of a hard-luck chef named Charlie, contains sentences such as this: “His dismissal created quite a proliferation of hearsay among the insidious restaurant insiders, hence the reason he now found himself in a kitchen on the outskirts of the city” (69). The story goes on to use words like “diaphanous” (99), “masticating” (100), and “detritus” (112). Carver would cringe.

Armstrong’s compelling voice and stylistic acumen comes to the fore in the title story:

The motel is illuminated under streetlights and neon, but when I turn toward the lake I’m surrounded by a darkness so immense I can’t wrap my head around it. I tip my head back like Sophie, so far back my mouth hangs open under the black bowl of a bottomless sky, like the black water of a lake over our heads. Abandon. I spin her gently, dipping her head toward the warm sand and back up into the night, bringing her ear to my mouth and whispering, baby, baby, baby. The smell of her makes every minute of my life thus far—shitty or not—worth it. (205)

This passage contains a gentle touch that is characteristic of Armstrong’s writing. Her stories are replete with an emotional resonance that borders on, but does not spill over into, sentiment. Another major theme of the collection also comes to the fore in this quotation: children. Two of Armstrong’s stories – “Clear Skies, No Wind, 100% Visibility” and “The Art of Eating” – end with the redemptive image of an infant child. In these stories, the infant allows the possibility of a future that is preferable to the now. Children, however, are not merely symbolic here.

In fact, Armstrong is at her best when she writes from the child’s point of view. Three of the pieces in this book – “Rabbit,” “Whale Stories,” and “The Spider in the Jar” – are told from the perspective of children. These stories are the best in the collection; here, Armstrong never breaks voice. “The Spider in the Jar” brilliantly evokes the pain of little-brotherhood and “Whale Stories” is the saddest, strongest piece in the book. Several other stories – “Thanks to Carin,” “The Art of Eating,” “Mosquito Creek” – achieve their most powerful effects when they lapse into childhood recollections.

Armstrong has a gift for describing the murky consciousness of childhood in plain, contagious language. Moreover, she does well to show us that this “strange” space is not so strange at all – that adults, like children, live in a world where we feel doubt and loneliness but can’t quite describe them, where we know that things are wrong but we can’t say why.

If there is a leitmotif to this collection, it is death. Most of Armstrong’s stories are macabre, verging on the gothic. There is a sinister undertone to Armstrong’s writing which keeps the reader interested and ill-at-ease. It is a wonderful sensation. What makes the proximity of death so effective here is that it never comes too close. It is always an almost-death, or a death that takes place off stage. A boy lies to his sister, pretending to have seen the carcass of a whale. An air traffic controller speaks to a pilot just before a fatal crash. A man receives a letter from his father over a decade after he has passed away. And, perhaps the creepiest moment in the book, a recollection of a truck going out of control in the story “Fishtail”:

Heather was dozing in the front seat, a Christmas list in her lap, and Leslie and Anna were sleeping in the back, small enough to still be in car seats. [. . .] They were the last car in a long line, and as they slowed down, Ted pumped the brakes, checking the rearview mirror as any good driver would. That’s when he saw the sixteen-wheeler coming down the hill toward them. It was still several hundred feet away, but he knew it wouldn’t be able to stop—it was coming too fast. As his eyes searched the side of the highway, trying to find a place where he could pull out of the way, the truck fishtailed, coming toward them sideways. It all happened in slow motion, in a vacuum of sound. [. . .] He took his foot off the brake, ready to drive into the ditch, but before he even turned the wheel, the truck veered and careened along the shoulder of the highway, coming to rest a safe distance away from them. (40)

The characters survive the fishtail unharmed, and the purpose of the moment turns out to be symbolic – it reveals the depth of the lost bond between Ted and his teenage daughter Anna. Although Ted’s family emerges unscathed from this incident, the reader does not.

The moment is fearful and awe-inspiring, a microcosm of the impact of the book as a whole. Throughout the collection, Armstrong invites us to inhabit spaces of imminent danger. In a sense, her work implies that life is this glance in the rearview, the sensation of a truck barreling towards us, threatening to crush everything we know. All we can do is hold our breath, cringing, as we read on, waiting for that stroke of relief when the truck comes to a stop. This book reminds us that we are powerless, that life is fragile, and that it is a great pleasure to emerge from each moment alive.

David Huebert lives and writes in Halifax. His work has appeared in publications such as Event, Matrix, Vallum, The Antigonish Review, and The Literary Review of Canada. His first poetry collection is forthcoming from Guernica Editions.