[Note: during the summer of 2013, Canadian poet Alice Burdick shared her personal “notebooks” with me. These notebooks cover the period between 1991 and 2003. They include doodles, drawings, portraits, collages, as well as early drafts and fragments of poems. The following gallery of images showcases a small yet representative sample of Burdick’s visual work. Presently, I am in the early stages of developing a digital archive of Burdick’s notebooks as well as rare literary ephemera. – Dr. Alex Porco]

I find that there’s a sort of creeping vine action to the brain (or my brain anyway!) and so ideas and connections can be made concrete in lateral ways.  So things coming from my pen might choose to be drawings or notes or, primarily, lines that arrange themselves in that familiar poem-y way.  So, practically speaking, I find visual expression in both the writing and the drawing, and go with whatever the impulse may be.

The top of the nude female figure— arms wide, neck stretched, back arched— turns away from its bottom, creating a sense of counterpoint. She holds her stare and her pose like a dancer or yogi. However, the figure becomes increasingly distorted below the breasts: a slightly distended belly; high posterior; exceedingly thin legs below the knees; and duck-like feet. The visual rhythm generated in the movement from head to toes corresponds with the piece’s overall movement from art to fart, from silence to noise, and from image to letter. Burdick engages with scatology: the letter ‘F’, a punning glyph, is an umbilical cord that feeds and sustains the living and making of “(f)art.” The body’s smells, noises, and blemishes are not extraneous; they’re nutritious— essential, even, to art. Or, we might equally be compelled to read the piece as a commentary on the unfortunate “hot air” that fills the artworld. Notice, too, how the dimensions of Burdick’s letter ‘F’ rhyme, visually, with that of the nude figure (i.e., long arms, small belly, and thinning bottom third). As Burdick explains, “When people started to write, to use those symbols [i.e., letters], the ‘A’ the inversion of a steer’s head, we were using our human pleasure and understanding of the visual to pass on information.”

THE FRUITS OF NEGATIVE CAPABILITY

“Banana” is an example of Burdick’s experiments with narrative, and it demonstrates her interest in the comic strip format. (Canadian poets bpNichol, Gary Barwin, and Angela Szczepaniak have similarly considered the poetic uses of the comic strip.) “Banana” includes a series of panels that explore the aesthetic, ethical, and emotional consequences of making decisions on a day-to-day basis— in this case, eating fruit: banana or apple? “Things begin all the time,” says the young hitchhiker in panel one, as he is seated on his suitcase at the side of the highway. According to the logic of Burdick’s road conceit, to take a ride on a banana does not foreclose the possibility of later enjoying a delicious apple. Each fruit— its taste and texture, real or metaphoric— is a means of transport to “another world, real fast.” Those worlds are absolute and distinct and yet co-exist in what Robert Duncan calls the “multiverse.” To choose to eat a banana or apple is to expose one’s self to “change”: it is an act of faith in metamorphosis. Moreover, the banana and apple function like Muses, inspiring the seated poet of panel four (formerly the hitchhiker) to encompass both “the cold weather” and “the hot weather too”— the truth and the lies. As the Muses in Hesiod’s Theogony write, “We know how to tell many lies similar to true things.” Lastly, the idiomatic “give me a hand” shows Burdick having a little bit of winking fun, drawing attention to the (mis)translation of inspiration across media, from handwriting to Microsoft Word

I (loosely) categorize “Halifax Winter” as a triptych: three images, each accompanied by a unique descriptive text. The images are all part of a single visual plane— there is neither foreground nor background. They are equal informational, expressive, and prosodic units. In addition, no framing devices are employed (e.g., panels), thus the images are organically connected under the sign of a “Halifax Winter.” The relationship between image and descriptive text is more complex, however. Tonally, Burdick’s text includes basic Linnean inventory and classification (“hot matzo ball soup”); self-consciousness and critique (“I notice in the mirror I have quite the paunch”); and, finally, an indulgence in mystery (“the invisible mind”). The invisible mind is represented by one eye only— the mind’s eye, which “beholds / Nothing that is not there and the nothing that is,” to quote Wallace Stevens. The self-portrait in a mirror exposes the poet to sensual and sentient experiences, respectively. The triptych localizes (i.e., Halifax, winter, matzo ball, paunch) the relationship between visible and invisible forces, a recurring theme in Burdick’s poetry.

Addendum: the drawing also has the three-part structure, simplicity, and intensity of a haiku.

A WOMAN NEEDS A MAN LIKE A FISH NEEDS AN ANALOGY

There is a notable tradition of Canadian Surrealism that extends from A.J.M. Smith, W.W.E. Ross, Bertram Brooker, and the Quebec Automatist Movement of the 1950s to the poets, artists, and translators in Stuart Ross’s Surreal Estate: 13 Canadian Poets Under the Influence (Mercury Press, 2004), which includes Alice Burdick, among many other fine poets. On the one hand, Burdick’s “Penis Bike”— comic, sexual, and oneiric all in one— trades in the classic Surrealism proposed by Andre Breton: “It is, as it were, from the fortuitous juxtaposition of the two terms that a particular light has sprung, the light of the image, to which we are infinitely sensitive. The value of the image depends upon the beauty of the spark obtained; it is, consequently, a function of the difference of potential between the two conductors.” If it is successful, the surreal image counters practical reason, actualizes desire, and refuses ‘good’ and ‘bad’ as value judgments. On the other hand, there is the material reality that moves Burdick’s drawing beyond Surrealism into a political critique of the gendered history of technology. The bicycle seat, after all, was created by and for men. It was only through the strategic interventions and inventions of female riders of the late 19th century that changes in the bicycle’s seat and frame shifted the technological focus away from the physical specs of the “penis.” (I should add that Burdick is, obviously, also playing with the anatomy of her name; thus, we might read “Penis Bike” as a self-portrait.)

What is pareidolia, exactly? It refers to the phenomenon of identifying (encrypted) shapes, patterns, features, and forms where they, in fact, do not exist (or, do they?): for example, seeing a face in a cloud, an elephant on Mars’ surface, or— for the more devout— Jesus in your cereal bowl. It exists on a hallucinatory spectrum that includes the paragrammatic, synaesthesia, and phosphene. “Noseteeth” is a piece that hinges upon the creative application of pareidolia. In her case, Burdick misidentifies nose hairs as sharp teeth and, by extension, the nasal cavity as an ominous, hungry mouth cavity. Accordingly, the childish, gross, and shamed act of nose picking results in the violent loss of a fingernail. However, Burdick’s point is not moral (i.e., pick your nose, lose a fingernail) but artistic. That is, “Noseteeth” speaks to the very real, physical consequences of imaginary acts, including “naming.” Burdick’s portmanteau title helps to name the pareidolic object into existence. “Noseteeth” is a collaborative piece with Victor Coleman, who added the parodic Latin subtitle “Nasal Dentata,” providing a degree of faux linguistic authority and officiousness to the otherwise gross proceedings of the drawings.

Addendum: in 2012, Neil Usher released the Nimbus MkIII, an “automating pareidolia” robot that identifies and catalogues nature’s forms, patterns, and features. Burdick’s “Noseteeth” is the ghost in Usher’s machine— a visual and linguistic invention that exceeds the technocratic processes of the Nimbus MkIII. 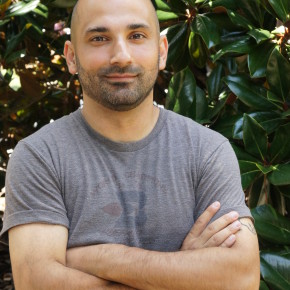 ALEX PORCO is an Assistant Professor of English at the University of North Carolina, Wilmington. He specializes in twentieth-century poetry and poetics. He received his Ph.D. from the State University of New York at Buffalo.