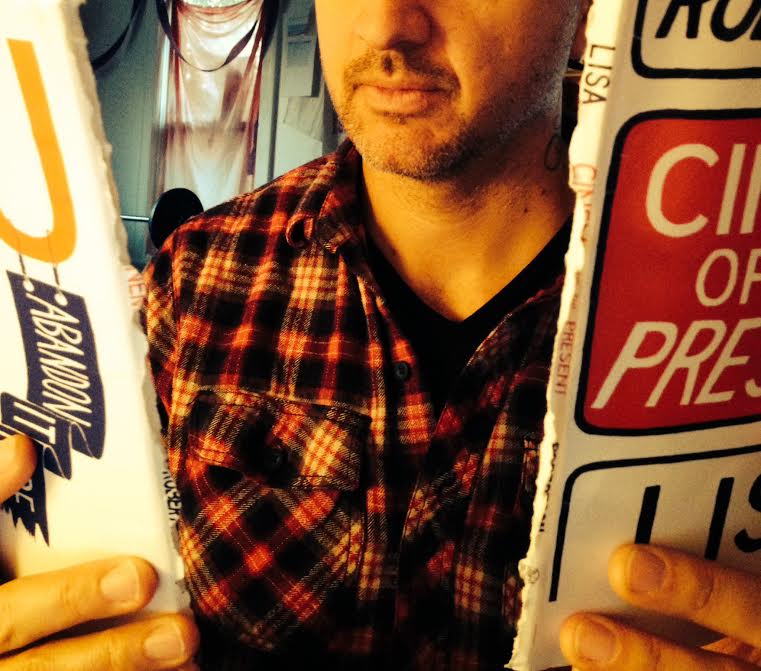 it’s not the new.  it is what is yet not known,
thought, seen, touched but really what is not.
and that is.

-Kmac visited Coach House just as Cinema Of The Present was being printed and they let him bring home a proof copy—even though it had been torn in half because the finish on the back cover was flawed and some of the pages were yet to be cut (book in half / pages still clinging to each other); a COTP in two pieces—a book about the seam of the You and I, too, cleaved/clinging.

-Or also or moreover therefore: did you know that a sentence can be humid? did you know a stanza can be fashioned out of Perspex? did you ever see a poet make You and I swap places so that the Us is present if never invoked? did I or You ever taste the real loneliness of nouns (cooking pots, museums, coyotes)?

-Okay—so an A-Z (at least I think I track that constraint/progression in the book: “and” to “because” to “coded” to “didn’t” and so on—a sequential jump in the alphabet every few pages) search for the new pronoun: hemmed between the ‘you’ and ‘I’ so those solitudes are…? what the reader has to weigh in the hands, I think.

-1st question, in the first line, of COTP: “What is the condition of a problem if you are the problem?”; last point, in the last line, of COTP: “Now only time is wild”—& maybe those are the thematic poles of the texts: uncertainty of the self and the untamedness of the hours.

-What is the luscious or fecund second (in terms of the clock’s ticks) in LR’s work? What is the vivid politics? At the same time what is the rust-unsleeping, exquisitely barren poetic sentence? LR’s particular muscularity: to think strong and to give magic (strong) too; I just want to emphasize the magicness because her poetry is a wham-o of scholarship and also a delight of imagination—she appears to meet every poetic task.

-“The poem,” said Henri Meschonnic, “is the place where one forgets, which is another way of remembering”; so recurrence in COTP: the engram, “memories” of earlier lines (from italics to roman or back again: not so much the chant of memory as the return of same as difference: lines that reappear but are changed now), the sounds of My Life here but with all nostalgic notes bracketed by some kind of chic chilliness, really I am sorry for being so flat here but… COTP teaches; as we encounter it (a declaration about time, in time) later, too: “memory and the present are not in opposition” (43) so I’m trying to respond to her book with a language that admits its caught but wants that admission to grant a bit of fleetness, too.

-Or “When the anarchic excess has already been anticipated, what next?” (9)—is that not the most trustable place to start? What I mean is, I admire to the roots the way LR has always struggled to find the better (?)/the improved and more human irony: “Also you have aspired to a sincerity of skepticism”; so the poem talks to itself (the poet thinks with her poem / talks to her poem) straight out from the first “conditional” problem—but what I like is how LR isn’t ever mired in the problem of what to say or how to proceed… the only crisis—again, I think COTP teaches this—is failing to recognize that this is the constant condition: one must keep aspiring, aspirating, remembering that one has forgotten to remember, again and again again… Later we get: “the form never extinguishes its own irony” (49) until the poem pushes beautifully against its own desire for both sincerity and slickness.

-This is the thing for an I like me: “an unknowing expands within your pronoun but it feels convivial” (12); I like this party being thrown for two pronouns that can’t really meet and therefore that’s their intimate rendezvous—like LR is saying (to herself, to a future I, to an us) just deal… and offering another definition of the poet or the lover in action: an unknowing that grows within a coherence in order to warmly disrupt that wholeness. And/or this: “you carried the great discovery of poetry as freedom, not form” (75).

-Or instead try this these love is “your muscles made into extremely fine and silky tools” or love is “what light did, how the trees freed it” or love is “an inversion in perception” or love is “the smell of rain, bread and exhaust mixed with tiredness.”

-“And what is the subject but a stitching?”; I see this again as the threads (fiercely sewn or loosely—case to case/line to line) that holds the first and second pronouns together… the stitching being the seriality here. Inevitable, then, not to mention desirable to be absorbed by the middle-space or gap or coupling point or hinge: “Very simply like this you disappeared into the interval” [my book in two halves!].

-“I’m entirely for your fucked-up way of living” (16); so the pleasure, on one level of the convivial text, is hallucinating a Lisa of the mind talking back and forth with a Lisa of the page—how come that then, at the very same time, feels like a me and (can I say this?) even an “us” in there? how does she do that?

-“At times you had wanted only to float upon the norms of a beautiful language, obedient” (18); look, if you want your lyricism I’ll give you this “Birdlet with the weight of a gasp” (20) so she can do hands as realistically as you fkn can and see this—“But you are not Mademoiselle Falconetti’s face”—as if to check herself against a different kind of ego temptation… the poem doesn’t mock itself or play an easy game of self-deprecation: it keeps the dynamism active with reminders: don’t settle / don’t believe your own ars poetica, jerk /  which is maybe the erotic? Anyway, in this cinema of Cinema the texts are sort of like stills from just such a stark, gorgeous, harrowing Dreyer film.

-“In order to enter you needed an identity” (31), as if the poem in the end is that sublime complaint against the demands of membership/belonging: I am entirely for LR fucking up the inner circle.

-Which has got to be this or “the problem of solitude, what was it to you?” because “you have here an unfixed being”; not sure I’ve conveyed it but COTP is sculptural as much as cinematic: sculpting in text in time; all of these “gates made out of”—so each sentence is a kind of horizon, yes, but also an arch to walk under; and it reeks (beautifully) of tar, wax, wood, sand, roofing materials, burlap: again, for me, like pacing around Berlinde de Bruyckere’s “Cripplewood.”

-The explaining of ‘I’ to ‘self’ and how maybe one shakes oneself from docility: “At times you had wanted only to float upon the norms of a beautiful language, obedient” (59); “unfixed being” // “it is a cause for celebration” (81); put LR in the CANADA pavilion, please: our nation as an experience of fragrances: 106 jars to correspond to one sentence found on each of these fierce pages; in her dialogue with Brecken Hancock LR said this resplendent thing: “I try to seize this experience of not-knowing and let it become sentences”; the experience of reading COTP is “of the trace” of knowing—the reminder, maybe, again, and again, that we knew but have forgotten… “of the trace” in the sense of olfactory in the sense maybe of the whiff of the body of the you and the I in the sense of apprehending the swoosh of the zoom of words: “you left a wake of linguistic sillage” (82); the scent of sentences: sniff anger, sniff tar, sniff grief, sniff dog, sniff sex, sniff sacred.

-I just experience the present, in COTP, as all the possibilities of a poetic that does not give up the vast challenge to think, to struggle, to seek the beautiful even amidst the most devastated landscapes. Sort of, for me, this book is a wake-the-fuck-up: it is a this-is-how-wildly-and-widely-you-can-think and also a this-is-how-a-feminist-poetry-and-an-experimental-poetry-might-continue-to-show-the-way; part of that way-showing is, as I say, the wrasslin’ with impossibilities: “the question now, you think, is who can really afford this law” (99); and that “you”—these “yous”—in LR’s work so often offered as a gift, not an accusation… an open, intrepid talking-to/with.

-All of COTP, then, so much tough, gracious directions for those of us, those of you, those countless I’s, working and struggling and living “in the part of the night where it’s quietest” (106). 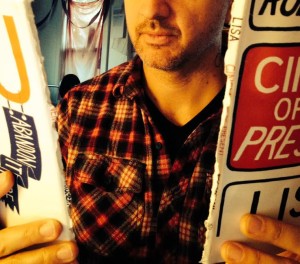 Jake Kennedy has got the ol’ time gut-thrills for this coming spring… because of the blossoms and all that… and because BookThug gonna be publishing a new one by kevin mcpherson eckhoff.