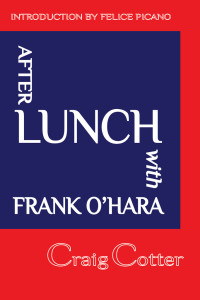 In 1959, Frank O’Hara published “Personism: A Manifesto”, a tongue-in-cheek essay that, for all its cynicism towards critical prose about poetry – the essay’s first line insists that “everything is in the poems” (247) – remains the clearest articulation of O’Hara’s casual, intimate poetics. Anti-form and anti-symbol, O’Hara argues for a poetry in which “you just go on your nerve” (247); his stance towards “measure and other technical apparatus” (247) is that these elements only have merit insofar as they make a poem more attractive to the reader (he compares poetic technique to the tight fit of a sexy pair of pants), and his approach to content is to reject abstraction in favour of a completely personal poetry in which the poet directly engages their real life and addresses themself “to one person” (248) in particular with the kind of specificity of reference one might expect more from a phone call than a literary work. The entire mock-manifesto was apparently written as a preamble to “Personal Poem”, a poem directly addressed to one of the poet’s lovers in which, true to his poetics, O’Hara meanders through a story about his afternoon before playfully wondering whether “one person out of 8,000,000 is / thinking about [him]” (31-2). “Personal Poem” is representative of O’Hara’s body of work as a whole, and of the Personism movement which he humorously (but still sincerely) claims in his mock-manifesto to have “recently founded and which nobody knows about” (248).

Writing fifty years after the 1964 publication of “Personal Poem” in O’Hara’s seminal Lunch Poems, Craig Cotter clearly knows about Personism. From the title onward, his new book After Lunch with Frank O’Hara is an unabashed tribute to the man and his work. The collection is an thorough, deeply personal engagement with and ecstatic riff on O’Hara’s poetic legacy. Cotter’s afterword to the book explains the impulse for his project; he credits O’Hara with giving his writing “new freedom” to “blast away and ignore the old rules of the self-contained machine” (95), and frames After Lunch as a tentative answer to the question of how to “move forward with our poetry respecting what he taught us” (97). The “setting for these poems” (98) is a meeting between Cotter and his late master on the field of poetry, a chance for a contemporary poet to digest the impact of one of his towering influences, and in doing so, to explore his own position as a poet, a gay man, and a restlessly sensitive human being.

The generally short poems in After Lunch are divided into four sections. Of these, “Talking to the Sun” deals most overtly with O’Hara as a presence. The section is dedicated to O’Hara, and contains several poems either addressed to him, or directly referring to him in their title or their content. “Personal Poem (for Frank O’Hara)”, its title nicked from O’Hara himself, is emblematic of Cotter’s approach. Intimate, direct, and unfailingly specific, the poem documents a thought process: Cotter (it would be dishonest and inaccurate to refer to a generic “speaker” here, or in the book as a whole) begins by reflecting on a “street hooker” (3) named Javier, moves to a memory of his high school “senior song” (7), then to a memory of a friend playing a prank on “Sugar Beach” (10), then to another image of Javier and his “tiny uncut cock flopping soft” (11), then to the thought of John Ashbery encouraging Frank O’Hara to keep writing his long poem Second Avenue, then back through several other childhood memories, before finally landing on a self-consciously doomed attempt to completely identify with O’Hara by pretending that “John Ashbery / wants me to keep going” (23).

The idea of Ashbery encouraging O’Hara to keep writing – and of Cotter imagining the same conversation between Ashbery and himself – reoccurs throughout the book, and is key to the way Cotter’s poems present art and life as deeply interconnected. After Lunch is in this sense a book about Cotter experiencing life as a poet, and measuring his achievements (both in life and in poetry) by O’Hara’s yardstick; as he writes to O’Hara in “After Lunch (for Frank O’Hara), “I’ve outlived you by five years / but not out-written you” (15-6). In “Good Friday”, the book’s longest poem and its impressive centerpiece, Cotter calls on O’Hara himself as an imaginary voice of encouragement. The five-page poem documents its own creation and declares its poetics early on, which are unsurprisingly similar to those O’Hara espouses in “Personism”:

Here’s something new:
No symbol, no image,

Presence unkind and dull.
Transcend your own life. (4-7)

Later in the poem, Cotter wryly points out that “when you get rid of symbol, image / and an interesting presence” (50-1), “then you really gotta consider / what you’re left with” (55-6). What we’re left with is an autobiographical survey related to but less joyful than O’Hara’s exuberant chronicles of his own experience. Cotter’s poems end up balancing celebration with rumination, combining both in the personal style he inherits from O’Hara. In “advice”, he moves through direct addresses to several of his friends, each short stanza offering little nuggets of tongue-in-cheek wisdom like “paul spend more time in / your green grand torino” (3-4) and “sarah / be a boss” (29-30). For all its playfulness, the poem ends up feeling like a monument to many people’s small regrets – “helen / go back in time / skip the farm / go to high school” (41-4) – and is bookended by a question that belies Cotter’s own moral position: “how did i / get so rich” (1-2). After Lunch ultimately paints a picture of a poet trying to write like Frank O’Hara but deeply aware of his own circumstances keeping him from pulling it off. Cotter here is worried about his significance, concerned for his friends, aware of the fleetingness of his sexual connections (often with young male prostitutes), and guilty about his relative financial stability. The gulf opened up between O’Hara and Cotter ends up being the most interesting thing about the book; Cotter’s dialogue with his imagined mentor reveals a great deal about himself, and about the dynamics of literary (and personal) influence more generally.

One feature of both poet’s lives that Cotter explores with sustained attention is their experience of their homosexuality. In his afterword, Cotter writes that what most moves him about O’Hara’s life is the way he “lived “out” and was unapologetically gay” (97) long before this was safe or socially acceptable. Cotter takes this openness as an inspiration, and does a great deal of work in After Lunch that point towards, as he puts it, “how to be out, unapologetic, and get it in the art” (97). Often, this takes the shape of frank physical depictions of his sex life: Javier’s flopping cock in “Personal Poem”, a “little freak” (89) named Candido’s “giant dick in me” (90) in “Good Friday”, a resolution to “increase my use of boy whores” (2) in “New Year’s Resolution 2005”. In other places the effect is much more tender, as in “Advice for Carrie Preston”:

In “Good Friday”, Cotter wonders if O’Hara topped, bottomed, or was into anal at all, and laments that “all those fucking homages and memoirs // and no one gets to that gay fact” (60-61). Throughout After Lunch Cotter goes in search for the gay fact of his own life, laying bare the intricacies of his sexual and romantic life in direct, personal language. If this can sometimes seem like an overly presentational effort to épate la bourgeoisie, Cotter is also making a genuine political point. For all the rhetoric in artistic communities about openness towards homosexuality, the realities of gay sex and gay love are gestured towards far more often than they are actually represented. Moreover, the bold, naked descriptions of gay sex in After Lunch may seem overcooked to certain more liberal audiences (the poetry world certainly being one of them), but the sexually confessional dimension of Cotter’s work could still be greatly impactful in communities like the Michigan neighborhood of Cotter’s childhood “that had no out gay people”(97), which still exist in far greater number than most of us would like to admit. Whether a contemporary book of poetry from a small press like Chelsea Station Editions can actually reach these communities is obviously a much more complicated question.

Ultimately, After Lunch with Frank O’Hara is a clear-eyed, engaging and entertaining work. Cotter’s book isn’t necessarily innovative, but it never tries to be; if anything, it ends up feeling fairly provocative in its willingness to pay close tribute to the poetics of a man who died almost 50 years ago and whose work was, in my own opinion (which Cotter seems to share), never as influential as it perhaps ought to have been. The book isn’t groundbreaking, but it is certainly life-affirming. By taking a direct, personal and playful approach to his work, Cotter asks us to reconsider poetry as a venue to simply think about our lives, out loud, to an audience of our close friends. If this doesn’t present the full picture of what poetry can do, it nevertheless feels like an refreshing, exciting thought. 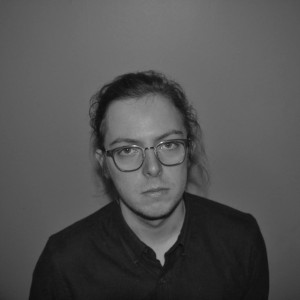 David Walker lives in Montreal. He runs a company called DuckRabbit Theatre and is the writer of the plays Beware Beware and You Can Change Anything Whenever You Want. He edits poetry for The Void.