“Tag” is a poem in two parts and a rare example of a non-linear poem in the pages of the New Yorker. One section, “This,” begins with what appears to be a very conventional move, spring/longing/body:

The lines are simple, the words, so few, are plain, and repeating, place, place, their, their, bookmarked by insatiable and standing, but who is standing? Trees “in place” first, then in “their scraped-out” place, their “standing,” the gaze waving through this scene a metronome. April is insatiable. Of course it is. Everything thirsting, exploding, like poetry and criticism. These three lines followed by the highly sculpted “Standing way”: a short summary; a hinge to the next section the two words a kind of pause, but not a stop, despite the period. Standing way offers a hovering before the poet carries on with description: “red branch areas,” “green shoot areas,” but even the word “areas” makes the otherwise conventional description stand out as thought it were surrounded by blinking neon. We are looking at something very familiar, but Carson is adept at making us look again, (place, scraped out place), not in a way that strains, but a way that does seem deceptively simple. Why scraped out? Are these city trees? One has the sense of distance here. Not just in terms of our physical differences, but in what we see, how we describe, and the clumsy nature of the language we use to communicate. The thing, tree, and our perception of it in relation the the earth, or place.

We move from tree to river, “that one,” the one that comes to us, that river of what? Longing? Desiring? Wide, fast moving? Or is the river in this sense, language? I want to think it is the river we each long for, it is what comes up for us (it is reshaping in my mind now, appearing to slow on the surface, widening as it races to the coast) literal or not. Nothing more specific than “that one” well placed, allows for this collaborative reading. It isn’t an effort, we are moving together (Carson and I, the river and I). This followed by brief, sharp statements:

I surprised a goose and she hissed.

I walk and walk with cold hands.

We have the conventional lyric subject experiencing a mild encounter with nature—a trope found repeatedly in New Yorker poems, as well as Canadian poems, but in Carson’s hands it is slightly less benign. One might imagine the old goose is Stein. The second narrator seems decidedly Carsonian.

By now you’ll be aware of the powerful rhythms under the very plain, curt lines. Visuals appear and are refigured. From the hiss and cold hands we move to:

Back at the house it is filled with longing,

nothing to carry longing away.

I look back over my life.

I try to find analogies.

Again no solace, no letting the mind transform one thing into another. “There are none.” The hiss of the goose will not soothe, of course, nor will the hands clapping, nor the ability to reason, the analogies don’t burn; back at the house one might be warm, but there is no reprieve from longing and/or looking. To be human is to be heartbroken.

The poem, in some ways, takes me back, not to the Beauty of the Husband, one of the great heartbreak poems perhaps, but “The Glass Essay,” which weaves confession, memoir, literary essay so powerfully. We don’t have that narrative clarity of “The Glass Essay” here, we have many leaps and gaps instead. This section ends:

It was not this.

Give me a world, you have taken the world I was.

The latter line one recognizes as a particularly successful Carson move, the turn, linguistically, syntactically and imagistically, all at once within a particular line: “give me a world, you have taken…” but instead of the expected “my world” we get “the world I was.” Much more spacious.

This new world you have filled with heartbreak, or it is you filled. This longing is inhuman. It is not infiltration, it is all-consuming. It has become me. I am no classicist, but I recognize the origins of this move as more classical than contemporary. Slight of hand makes a relatively simple line stop the reader and read again, a common feature of the Carson poem. As is the use of that large gap—she has much to teach us about the use of space. It isn’t simply aesthetic. The leaps are not empty ones.

The second half of the poem, “Your,” offers a different set of challenges. One, the use of two kinds of brackets, a feature of Jorie Graham’s poems as well, and one which can be difficult to parse. Or, I have yet to figure out a way to distinguish the two brackets either here or in Graham for that matter. I appreciate a poem that challenges me to learn to read it, but there are difficulties that irritate more than others and for me, brackets are one of them.

On the other hand, I do appreciate Carson’s use of the brackets in the Sappho translations and so trust that she isn’t being arbitrary (who of us likes to feel we are being played with?). And I am reminded that when I “don’t like” something it is usually because I don’t yet understand it.

In any case, one might ask what is the difference between the first use of brackets and the second, complicated further by quotation marks. We find (“unalterable”) and then later, [waiting] and [some noun]. Perhaps someone out there has an interesting theory. For me, I leave that bit of the poem uninterrogated for the moment, perhaps upon the next read it will make for sense. (Is it possible to leave one part of a poem unread and move on to the next?) [why so much emphasis?]

The title of the second half is “Your” and it begins as I just noted, with the complicated:

Actually not. Feigned leap into—

[some noun] for how thought breaks up around you not here

your clothes not wet in this deep mirror—

scored scoscored into the soul by the god of each day

years from now, these

notations in the address book, this frantic hand.

“Unalterable,” the poet asks? “Actually not.” (Hello Rae Armantrout!) Ironically pain inscribes itself on us, in us, takes on greater or lesser shape as meaning settles in. Words we encounter like those small condensed see animals that expand in water. Careful what you swallow. And you never know where and how you will welt. A German friend tells me the literal translation of die Tageszeichen is signs/marks of the day, each one with its small scarring. We appear before each other in unfortunate and wounding ways. We see, things appear one way or another; we attempt to harness what we see into recognizable patterns. Of Hölderlin I can say little else.

Tag! You are it. You run after the thought, you attempt to touch it, but sometimes it’s simply hiding. It has found a sweet spot. It, and you then, inhabit a moment of legendary dislodging. You hover in the between world, gripped in terror and wonder as time scrapes by glacier slow and loud as ice breaking up. Someone will call you in for dinner, light will sharpen, golden, then dull, birds rise up, and then fall silent around you, the crumbs you laid out to find your way back with are lost to the night, the night which is searching for you, there, tucked in between a fence and shrub, or behind a garden shed.

Life can be so wonderfully fluid: it is perhaps your turn, or you are the one hiding. Does it matter? Do we ever know? “Years from now, these/notations in the address book, this frantic hand” and night, again and again falling.

And strangely, for I can’t quite abide not having anything more to say about the reference to Hölderlin, I go to my shelf, find Carson’s contribution to Roni Horn’s Wonderwater project because I recall in that book a reference or two to Hölderlin of which I might find a connection to the poem above. And I do. To my surprise in fact, I find the poem above. The second half of it, just as it appeared in the New Yorker but for the difference of title, “This is me, this is you,” on page 107. The first part, with the title “To Place,” appears on page 109.

The titles for Wonderwater were supplied by Roni Horn. For this project she invited Carson, along with Louise Bourgeois, John Waters, and Helene Cixous to fill in the pages, each as they so desired. In other words, if you flip to the page titled “To Place” in Cixous’ version you find a blank, John Waters offers two lines

the pain, the humiliation, the missed chances

in Louise Bourgeois’ you find:
my name
is
total collapse
(no place to go but up)

And of course, Carson’s “Tag,” which I return to now and in this setting go at it again. What are these signs scored into the body by the god of each day? Numbers, names holding much significance, ghost marks in place? The river again, a thing now “glimpsed through.” Maybe river is time, air, currents. “Not wet,” suggesting not having been “in” the river, a reflection shaken, marked, inscribed, frantic, but still “present.” Have I unlocked the poem? What does it mean to fully read a poem? Must a reading offer an airtight, defensible reading?

I guess what I’m saying is that even though this poem doesn’t rank as a particularly memorable Carson poem, to me it is nonetheless satisfying. Not in a passive way for there are half a dozen things I must go off and ponder, a few books to find, several threads that may or may not lead me somewhere interesting…what am I saying? Of course those lines will lead me somewhere interesting, that is what good poetry does even if it isn’t itself the destination. Good poetry doesn’t close off, it doesn’t wrap up all the loose ends and inscribe a narrowly carved interpretation–it opens, it’s generative, it makes more.

I leave you with a visual from Wonderwater. A little drawing of Hölderlin by Carson included in a envelope of drawings by Carson titled “Hö comix.” This image of “Hö” from one of the small booklets, this one titled “Kafka and Hö: river by river,” and this of course, is “H.” 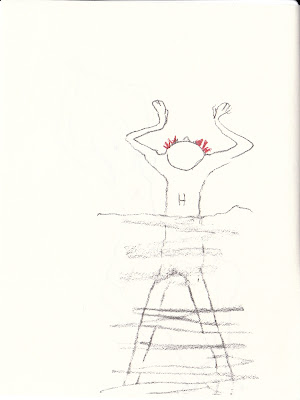