I met J. Mae in St. Petersburg, Russia, in 2007. We were both enrolled in writing classes with Summer Literary Seminars. J. Mae’s poetry workshop was in the classroom beside my fiction workshop, and we invariably arrived bleary-eyed to school each day, clutching our plastic cups of bitter koffe, nodding to one another, waiting for whoever would unlock the classroom doors to unlock them. This eventually gave way to conversation, and blinis, and Facebook friendship.

When, recently, I saw that J. Mae had posted the above picture on Facebook, I had to hear first-hand the story of her experience with Marina Abramović at the artist’s retrospective at the Museum of Modern Art in New York. 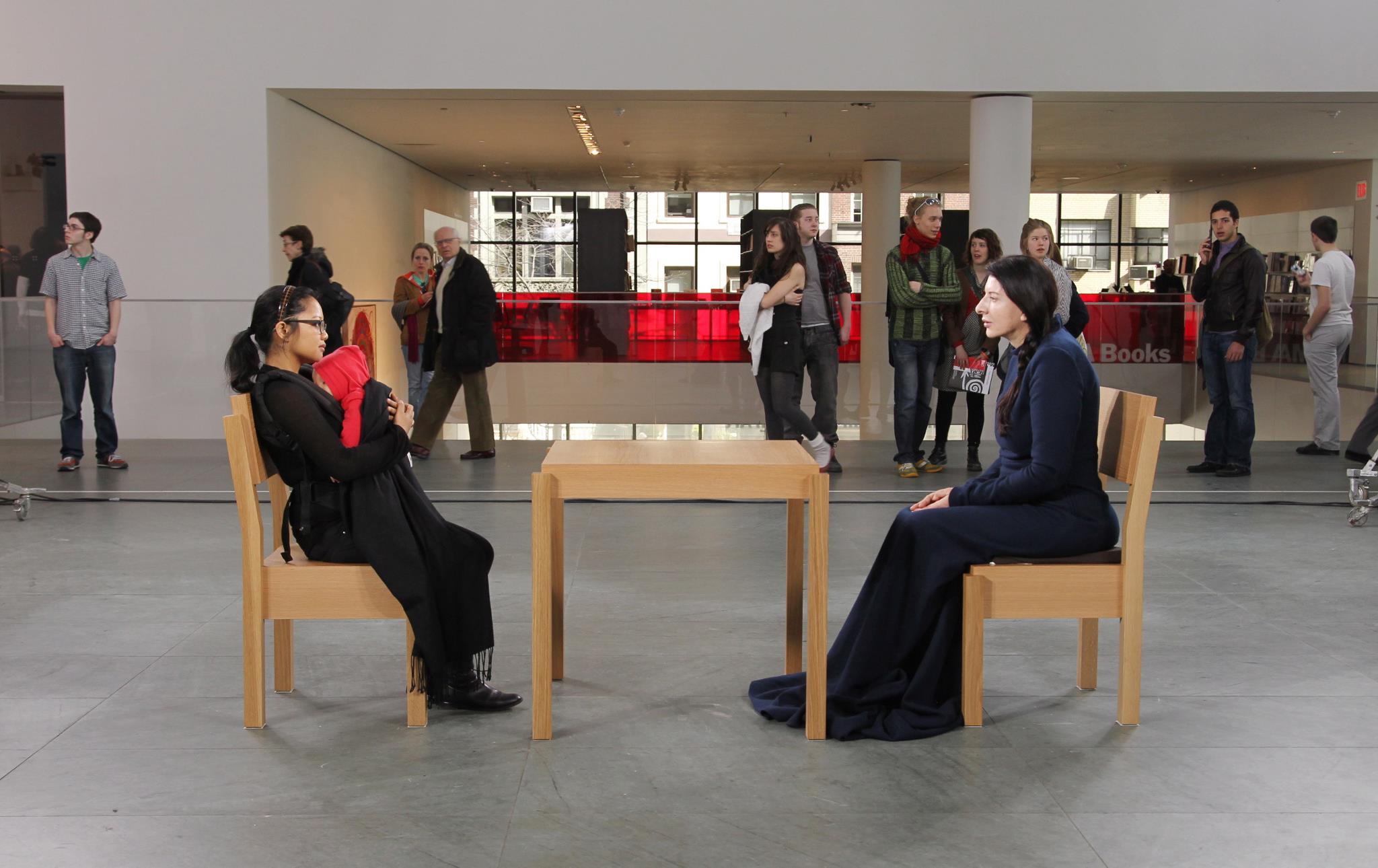 Melissa Bull: Why was ‘The Artist Is Present’ something you wanted to see for yourself?

J. Mae Barizo: I had just finished writing a conceptual poetry manuscript based on a project of Marina’s, and she’s always been a muse of mine, so I knew I needed to see her at MOMA.

MB: What project in particular moved you?

JMB: In a conversation/interview with Hans Ulrich Obrist during Art Basel 2007, Marina spoke of an unrealized project that she entitled “How to Die.” For this project, she wanted to re-enact the last three minutes of the dying scenes of different operas, since she explained that “in every opera there is a woman dying in the end” and discussed how audiences like “the staged death.” Very macabre of me, I suppose, to be so inspired by it.  But I adore opera, and I’m a woman, and something about her project resonated deeply for me.

“In this day and age of ceaseless electronic
and media saturation
I feel like genres, in art especially, have blurred.
A musician can create performance art;
a writer can be a conceptual artist.”

MB: You’re a musician and a writer. How does visual art integrate itself into your life and or practices?

JMB: In this day and age of ceaseless electronic and media saturation I feel like genres, in art especially, have blurred. A musician can create performance art; a writer can be a conceptual artist. Since I have spent such a large percentage of my adult life (and childhood) as a musician, and have worked in both performing arts and literature, I have seen how these artistic arenas can be  integrated in order to create works that have the ability to resonate not just for musicians and writers, but to the population as a whole. But in a simpler sense, in my practice, visual art has inspired my writing in the way that it enables me to explore my ongoing inquiries about the nature of the sublime (in Kant’s sense of the word). And art, in its many forms, has bled into my own understandings of the often sub-conscious aspects of my personal experience.

MB: What day did you go on? How far into the show was it?

JMB: I was waiting at the museum doors before MOMA opened, on the first day the show was open to MOMA members. So basically Day One.

MB: How long did you wait in line to see the show?

JMB: I was the seventh in line, and waited about 20 minutes.

MB: How long did you sit in front of the artist?

MB: Why did you bring your daughter with you? How old was she at that time?

JMB: Well, mainly because I didn’t have a babysitter! She was just over a year old.

MB: How did she react to Marina, if at all?

JMB: In line, Ada (the baby) was fussing and crying, and a guard approached me and expressed that he wasn’t sure if I was allowed to bring the baby [to Marina].  But then someone from Marina’s team okayed it.  And amazingly, right before I went to sit down in front of Marina, Ada fell into a deep sleep. She didn’t stir the entire time when I was sitting there.

MB: How did Marina react to you, or your baby? What did that feel like?

JMB: When Marina saw the baby, she acknowledged it right away. Smiling slightly, and nodding. This sense of unfathomable happiness hit me, at that moment. And then, inexplicably, tears started rolling down both of our faces (Marina and I). When I saw her crying, I started to cry harder; and I saw that it was the same for her.

MB: Did you purposefully coordinate your outfits — both yours and your baby’s — to parallel Marina Abramović’s simple yet dramatic costumes?

JMB: I actually didn’t mean to coordinate at all!  It just turned out that way.

THE ARTIST IS PRESENT

MB: How did you know it was time to get up?

JMB: Honestly, it was so intense I could hardly bear it a moment longer. Her gaze never left my eyes, not for one second. How many times in your life do you have an intimate experience like that? Usually it’s only with a lover, and even then, sex or words get in the way. To look without moving, or touching. There’s something very emotional, yet unnatural, about that.

MB: How did you feel you, too, were present as an artist in the time you spent with Marina Abramović?

JMB: To tell you the truth, all the prescribed classifications that come into one’s head when one says artist, exhibition, museum completely dematerialized for me during those minutes. We were simply two women, sitting very close to each other, and sharing something that I don’t think either of us would be able to accurately interpret or explain.

MB: What impressions were you left with afterwards?

JMB: Right afterwards, I felt like I was in some state of shock. Since it was the first day the exhibition was open to the public there were many photographers, and press people. One man approached me excitedly and asked ridiculously, “Do you speak English?” (this happens often in America, and I find amazingly rude, as if only white people speak English). He went on asking me how it felt, how he saw us crying, how it was exactly what Marina envisioned. In any case, I was really in some kind of post-high zone and kind of brushed him away.

I think about that time with her a great deal though. A mutual friend of Marina and I, a member of Antony and the Johnson’s, emailed me recently and wrote, in caps: ‘MARINA REMEMBERS YOU  WE HAVE TO TALK ASAP  SHE HAS QUESTIONS.’ One day I hope I’ll be able to answer those questions for her.

Born in Toronto, J. Mae Barizo‘s poetry and critical essays have appeared or are forthcoming in Boston Review, Denver Quarterly, Matrix Magazine, Prairie Schooner, among others. She is the editor of Fields Press and The Aviary, a lit-quarterly dedicated to literary criticism. She is also a professional musician who has performed with Mark Morris, Jay-Z, Beyoncé, Kanye West, among others. She lives in New York City.