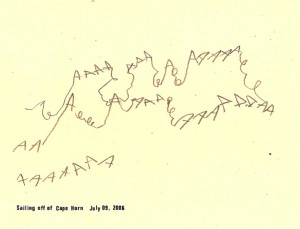 I first encountered Cecilie Bjørgås Jordheim in Oslo in 2010 after brief discussions online. She had been in the audience for a series of talks by Kenneth Goldsmith the year before and their correspondence lead to Cecilie and I deciding that her work would be featured as part of the Visual Poetry section at UBU. Born in Bergen, Norway, Jordheim is a recent graduate of the Oslo National Academy of the Arts. Working primarily in the media of visual scores, her work has a significant amount of cross-over into visual poetry. While Christian Marclay also works with found and manipulated musical scores as an artistic media crafting graphic representations of the language of musical notation, Jordheim’s work is more closely aligned with an eco-poetic mindset. Marclay’s scores develop from found consumer goods, strategically broken records and vandalized posters (for example 2008’s “Prêt-à-porter” and 2010’s “Zoom zoom”) while Jordheim creates musical scores from ecological lines and fragments. 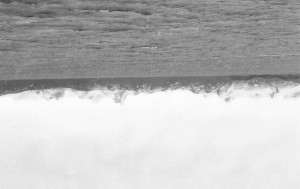 Jordheim’s partitur (produced in an edition of 57 signed copies by Glemmeboka, 2010) is a 147-page score for violin which uses the mountain range around Vesterålen, Norway to suggest a performance. With partitur Jordheim sees the horizon line as a readable poetic line, one which can only be read, it can also be performed Jordheim’s proposed reading practises generate musical scores, compositions for violin, cello and vocal performance which create eerie ’pataphysical evocations of place and landscape. Jordheim also treats the literary landscape as she does the natural. Reading is an act of looking and scoring. In the “Conceptualisms Dossier” in the latest issue of Matrix, she evokes architectural drawings of a cityscape by mapping the lyrics to Starship’s insipid 1980’s pop song “We built this city on rock and roll.” The schmaltz of the contemporary musical landscape is transformed into an anonymous cityscape, as devoid of character as the original song. 2008’s “Barcode” —Jordheim’s student work—is a 16mm film (transferred to video and now to YouTube) which consists entirely of manipulated barcodes. 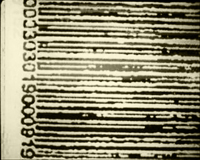 Using compositional strategies similar to those of Norman McLaren, Jordheim glued each barcode on to the film’s image and sound tracks, the film then make[s] sound as it passes the photoelectric cell in the film projector and shows a direct connection between the sound and the image. What you see is what you hear. By having glued on a barcode in different sizes, it plays in a range of two octaves, approx. from low to high C. The density of the lines decides the pitch—the more lines per frame, the higher pitch. Jordheim’s translation of ecologies (both natural and artificial) into musical score suggests the readability and performability of any line much as the late Bob Cobbing famously would see coffee cup rings, mud puddles and bark as scores for potential sound poetry performance. Her 10-point manifesto “How does it sound?” summarizes her artistic / poetic concerns and forwards a series of talking points which interrogate the intersection between conceptualism, musical score and writing the landscape:

How does it sound?