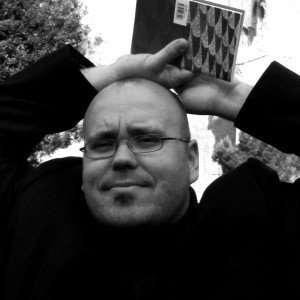 Each work has its own issues, but materiality is always one.Take LOVE FROM NEW YORK, which I presented in my exhibition about 9/11 at the Centre des arts actuels Skol. It was a ready-made, an appropriation of a DKNY perfume of the same name. Each day, the perfume was sprayed into the gallery space by one of the people who work there. There was nothing to see. A text indicated the “presence” of the work to the visitors. If they did not read it, they might have thought another visitor had simply worn too much perfume… This work evaporated very quickly and, to my mind, it was as invisible as the love or capitalism that surround us. And, perhaps, it was also as ephemeral as them, who knows?

Looking at some artists’ works today, one might get the impression that conceptual art has become a “style.” And, paradoxically, another way to make objects… However, I think the real work is the concept. But it happens that this concept is rooted in the materiality of an object, a book or a puzzle, for example. In addition, some proposals are more risky than others, and there are ones which are foolish or so minimal that they might go unnoticed. However, if they seem fully justified by the basic idea and integrated into the whole, I have no problem with presenting them. Anyway, the idea has to mature for a long time before I realize its physical medium or ask an industry to do so.

To answer your question, I love books with great passion; their thickness, color, texture, volume… I collect them. They are, for me, an excellent way to present my work and ideas. I always come back to art books and poetry around me. Books are my real studio.

I think, indeed, that the context of realization of a work must always be taken into account. And obviously this context includes a geographical location. For example, if you take a look at many conceptual poems, you’ll see how they are (North) American. Their relationship with commodities, advertising, newspapers, the Internet, art history – all of this is so deeply Western, and, by extension, American…

Not being a New Yorker, of course, influenced the way I designed the exhibition “11” at Skol, since it wasn’t about the event itself, but about its “mediatized manifestations.” (Like millions of others, this is how I witnessed what happened). In fact, what interested me, as a conceptual artist, in the attacks of September 11 2001, was the impact that the images of this disaster – immediately put on loop – have had on our relationship to images in general, and how they still haunt us and generate other ghosts.

In this sense, I think my geographical distance was probably useful, since it helped me to avoid too much pathos. In my opinion, this exhibition shouldn’t only have been a place for commemoration, but also a place for reflection. One of my favorite Robert Barry pieces is the one in which he refers to the gallery as a place to think: SOME PLACES TO WHICH WE CAN COME, AND FOR A WHILE, “BE FREE TO THINK ABOUT WHAT WE ARE GOING TO DO.” (MARCUSE)

Many of my works are about my geographical location. For example, DIRECTIONS, which I co-authored with Robert Fitterman, presents most itineraries (by bicycle, by jet, by foot, etc.) between his apartment in New York City and mine, in Montreal. This work can be read as the site of a meeting between two North American artists / humans / citizens, but also as an outlook on all means of transport that are now at our disposal and which have irrevocably changed the way we live.

I’m in progress now on a project in which I compile the latitudes and longitudes of all the places I travel in the course of each day. This project, which began on November 1 2012, is part of a series of texts entitled CLOCK WISE produced by several authors around the world and published daily on the blog http://clockwisewise.wordpress.com/. All texts refer to a change observed in the day. Through all of these, I am looking for a poetry of movement, but it is also a way to explore an approach that is both conceptual and subjective. Meanwhile, it is a reflection on the changes that have occurred with GPS or Internet on our modes of travel. After all, we all live on Google Earth these days.

Everything depends on the concept. For example, if the subject that I’m interested in deals with an American topic and the texts that I appropriate from the Internet are in English, there is no reason why the book should be in French, unless I want to talk about the gesture of translation.

I have to take dozens of small decisions in the selection process and ownership: what font should I use, what is the history of this particular font, in which format should the book appear, how many page should it have, what should appear on the cover and especially, must I absolutely publish this book, etc. The choice of a language is only one of them.

Recently I published a fairly radical work in Matrix Magazine titled FOUR QUIET POEMS. These poems are an attempt to dialogue with Agnes Martin’s paintings and Robert Barry’s One Million Dots. I tried all sorts of things and finally I arrived at this poetry composed of dots, very minimal and like much of what resides in the margins of literary production, quiet and alone. I never thought that anyone would be interested in these.

All my works are “conceptual”. Sometimes it is the subject which comes to me with burning evidence. In these cases, I must be on my guard: it may be too subjective, too easy or rehashed. Sometimes, as I said earlier, it is the form that inspires me the concept. (For example, I produced a series of poems based on short Samuel Beckett prose, because I wanted to explore the  “monochrome” in poetry…) But, more often, it is a desire for a dialogue with the works of other artists and other writers that pushes me to create a new work. I love art history passionately. Recently, I came across a sentence of Robert Morris that pretty much sums it all: “The problem has been for some time one of ideas – those most admired are the ones with the biggest, most incisive ideas (e.g. Cage & Duchamp)… I think that today art is a form of art history.” But again, I must be careful not to let it go unchecked…

I would like to respond as Warhol “…I realized that everything I was doing must have been Death.” Death haunts me, but I cannot say that I am “interested” in it. I love Freud’s story: long ago, a British king, devastated by the death of his wife, had her transported throughout the kingdom. Whenever the coffin was placed on the ground, a monument was erected there. Some of these monuments still exist today. Imagine, Freud continues, a woman crying before one of them every day. She would be a neurotic.

I may be wrong, but I think this story has something to do with art. Many works are hidden monuments.

The act of publishing my books or publicly displaying my work has fundamentally changed my perception of them, and in a good way, I think. It is an incredible opportunity to share one’s work, one’s thoughts, as here, with you. I hate ease. When I work, I’m my own cop. Not because I censor myself, but because I do not let anything go, especially if I know it will be shown publicly or published. I can remake a book 10 times, 15 times, before being satisfied.

I’m currently developing three new exhibitions, one of which should be almost invisible… I’m also producing several books at once, including my own “Bestiary”. I hardly ever stop working. I do not know what it means to rest.