I’ve written in several places about erasure texts (most recently in the latest issue of Evening will come) as typified by Jen Bervin’s nets. Berlin’s Natalie Czech creates uncanny limit-case poems that point to the end of erasure texts, each piece a seemingly impossible conjuring of texts within texts. 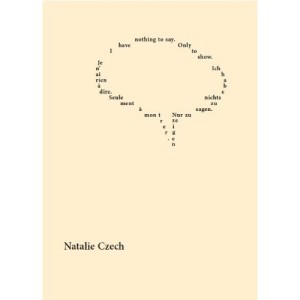 Czech has also commissioned friends to write the background text of one of the most famous concrete poems. Apollinaire’s classic calligramme “Il Pleut” rains down the page in a now clichéd trope; under Czech’s tutelage, her colleagues craft pieces of prose in French, in German and English—each of which contain the letters of “Il Pleut” in the same textual position as the original. Czech then photographs each piece as if it were part of an entire volume, a dream book where a single page contains the material for any given poem. 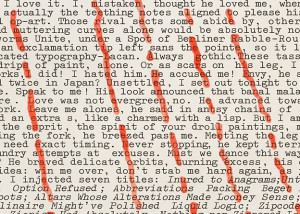 The middle third of I have nothing to say. Only to show is the most astonishing. Czech has scoured an unfathomable number of magazines and popular culture scraps and has found embedded—in a mind-blowing act of literary archaeology—evidence of famous modernist poems embedded in larger blocks of texts like fossilized dinosaur feathers preserved in the crush of shale. Czech simply highlights the uncanny occurrence of entire poems, photographs them in situ and exhibits these bravado acts of poetic discovery as troubling the line between poetic and photographic documentation.

weirdly embedded within the text of a a Life-magazine eras article who headline reads, in part, “far away the huge bomb explode […] / insured, unlikely enough toward […].” Not only is the article and accompanying photograph an uncanny commentary on the poem, but cummings’ original is somehow entirely extant—with line breaks and spacing intact—within the article itself. 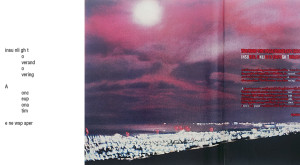 A single example of this seemingly impossible task is enough to incite jealousy and wonder at the audacity of Czech’s find. What makes “Hidden Poems” even more impossible is that Czech’s ability to find repeated poems by Creeley, Brinkmann, Khlebnikov, Lax, Kerouac and O’Hara, each also embedded within the cultural fabric of non-poetic media.

derek beaulieu is a regular contributor to LemonHound.