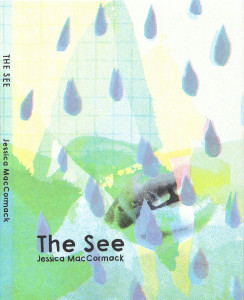 On the third page of The See, interdisciplinary artist Jessica MacCormack writes:

I have been in therapy for a Very Long Time. I am waiting for “it” to be “over.” The past grows inside me. There is no place for it to exit.

And we think this book might be some kind of exit, some kind of release, while already knowing that it is not.

This is a book constantly, achingly trying to find ways to convey the disembodied experience of being abused when one is too young to fully understand what’s happening. It is a book that speaks directly about its subject while at the same time skirting the issue. So many ways in and around it. It wants so much to speak of a very specific abuse in the author’s history, yet we always understand why these abuses are never quite described. The characters are rarely given names, instead they are: The Others, The Missing One, That Man (who we assume perpetrated the abuse) and, later in the story, the Man-Who-Knows-It-All (a therapist who clearly doesn’t.) The sparse, at times awkward, writing style directly reflects the push and pull between confiding too much and then not nearly enough.

This is also a book that continuously mixes text and imagery in a fluid, mesmerizing onslaught. What I found most fascinating, and also most difficult to describe here, is how the imagery plays with and against the text. This is literature as visual art and vice versa, at times reminiscent of certain kinds of zines but too beautifully produced for the resemblance to congeal. Perhaps, if words cannot tell such stories, pictures might help, or help make them more bearably obscure and unsaid. The imagery never only illustrates the text, it always complicates it, each time taking us somewhere else. For example, next to a passage that explains how the protagonist is trying, and failing, to be like The Others, we see three similar looking women in matching green coats. 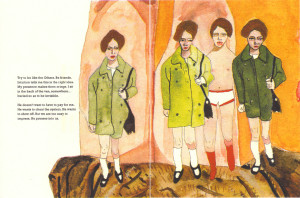 Amongst them stands a similar looking boy/woman, naked except for white underwear and red socks, with lipstick that smears down over his/her chin. In one sense it is an image of not fitting in, yet it suggests a greater strangeness and ambiguity. The green coated women are all looking down, while our protagonist looks not quite straight-ahead, more like almost straight-ahead and slightly off to the side, as if beckoning the reader to see what he/she has to deal with all around her. I am not doing it justice. It is more subtle, one of my favourite images in the book.

There is a frequently repeated truism that art and/or literature should not be therapy for the artist or for the viewer/reader, and whenever I hear this criticism I always think why the fuck not. I take the truism to mean that art should not be navel-gazing or self-indulgent. I don’t think speaking about painful, personal difficulties is self-indulgent (though, like anything else, it can be.) When I hear that art should not be therapy, I feel the same way as when I hear that journalism should always be objective. I sense a certain reluctance to deal with reality. In reality we all have problems, to a varying degree we all have painful histories. In reality we are not particularly objective, we have biases and positions. (In journalism there is the added bias of the corporations who buy ads in the newspaper, therefore indirectly paying the journalists salary.) 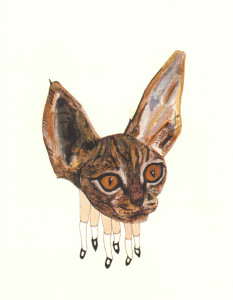 The See bravely crashes into therapy as art, coming out the other side apparently and honestly unhealed. It is the opposite of cold conceptualism. It is a sad fire of much-too-personal history.

Near the end there is the expected reckoning, yet everything is described abstractly, one cannot be sure who said what or precisely what happened. At an annual family gathering, someone finally bursts: “I was raped.” Yet right in the middle of the fallout we have time for the following aside:

It was just a stupid empty time really. Full of the weirdest combination of boredom and horror. A truck killed our family’s only friends. The entire family. Except one daughter. She was fine.

The distance in this aside is the same distance through which, in this book, the protagonist/author seems to view her own life and trauma. At the same time this is never quite the case. She is far away and seeing it all too closely, right inside her head, and it has been this way for a “Very Long Time”. There is distance and there is none. It has something to do with the vibrant color and playfulness of the imagery. The past continues to haunt us, and yet we continue to play.

Jacob Wren makes literature, performances and exhibitions. His books include: Unrehearsed Beauty, Families Are Formed Through Copulation and Revenge Fantasies of the Politically Dispossessed. As co-artistic director of Montreal-based interdisciplinary group PME-ART he has co-created the performances: En français comme en anglais, it’s easy to criticize (1998), the HOSPITALITÉ / HOSPITALITY series including Individualism Was A Mistake (2008) and The DJ Who Gave Too Much Information (2011) and Every Song I’ve Ever Written (2013). International collaborations include: a stage adaptation of the 1954 Wolfgang Koeppen novel Der Tod in Rom (Sophiensaele, Berlin, 2007), An Anthology of Optimism (co-created with Pieter De Buysser / Campo, Ghent, 2008), Big Brother Where Art Thou? (a project entirely on Facebook co-created with Lene Berg / OFFTA / PME-ART, 2011) and No Double Life For The Wicked (co-created with Tori Kudo / The Museum of Art, Kochi, Japan, 2012.) He travels internationally with alarming frequency and frequently writes about contemporary art.