Another committee meeting.
Of course no one will shit or get off the pot.
7 scientists, 11 politicians, 3 generals, an anthropologist,
and a sculptor. No one knows who invited the last.
We’re debating a symbol that ought to last 100,000 years.
Or whether a symbol ought not to exist at all.
We scarfed dry mustard-less roast beef sandwiches,
and wrapped up lunch by belching out tinny pop
through our nostrils.

Yucca Mountain, against
the residents—against anyone but us and this buzzing
halogen-lit conference room, is being hollowed out
to make a womb for spent nuclear rods. It will become
a veneer of a mountain, as brittle as the holy host.
Our self-appointed role is to figure out how to keep
people off this stale crust. To determine whether a sign
will pique their interest, or whether lack of signage
will spill the end

of civilization by accident.
100,000 years is nada to a single cell,
but to a culture, it’s epic. ‘What should we spraypaint,’
asks one general—‘a bull?’ We understand cave paintings well,
or so we’d like to think: like a four-year-old’s art—
a house and sunshine and Mom. If there’s lightening
and/or tears, call the shrink…In the past, as in our youth,
our needs encompassed less than to speak, yet the images
conveyed meaning

so basic they still give off heat.
Our ancestors thought a lot about food. The sculptor asks,
angular, ‘What will the future think of the obelisk
at Trinity? Is this phallus a warning, or does it
seduce by wanting inside?’ A general coughs
uncomfortably into his fist and chides. He refers to Chozo
with Phazon in Metroid Prime. No one knows what he means,
but no one will fess up, so we nod, grim. I think the gist is, he has
a fondness for obelisks.

We debate what symbol
could endure indefinitely. Whether the three-winged,
fluorescent snow angel of radiation is universal.
Whether it can sustain its meaning. Whether rain
will erode it’s imprint, or whether it will be
interpreted as ‘there’s gold in them hills,’ and people
who start digging will weaken. Not from soil weight
on the shovel, but from the fateful encounter with
depleted uranium.

‘We can’t make a clock
that lasts 1,000 years!’ exclaims the anthropologist.
A politician counters, ‘I vote to keep this on-topic.’
Scientists form a chorus: ‘Here, here.’ No one admits
that we’re pre-managing our reputations for when the
minutes go public. Trying to show we understood the gravity
of whether (not really), and how (yes, really), to transfer
the future—yours, not ours—over to an
awesome, boring machine.

I AM A WOMAN OR I AM A HORSE

Comes a point where you must confront why
you’re still alive and what you intend to do
with it. She braced to die younger than Jesus,
feeling that a lesser being didn’t deserve
to outlast him.

But she tripped and But she tripped and cracked her temple,
got concussed, and vision took on new hues,
a sharpened geometry. Perhaps the phenomenon
was temporal—a compressed hippocampus,
amygdala milked of terror, hallucinating
a beam in dark hedges.

Now greying and shrinking, never having
had beauty or charm to mourn as it melted,
those wax mummies in heat, she lived
her life on her feet, and wore
her body like a cilice.

But she tripped and She flinches when looked at bulls-eye,
it’s a health protectant, and is home in a herd,
unexceptional and silent. The world thrives
on kicked up dust and gun powder, calls
clamour forward. She must never tire
or risk being hunted.

Those archetypal, over-contingent _____ before her
slipped on marbles, huffed gas, and collapsed
into forever-slumber. Their manes were braided
into the fairy tales that they had starred in
to try to unravel.

MOLLY GRUE: It would be the last unicorn
in the world that came to Molly Grue.
It’s all right. I forgive you.
UNICORN: I am here now. I am here now. 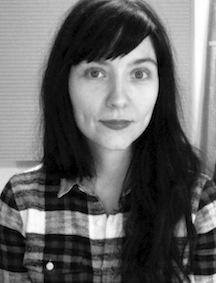 Stevie Howell’s first book, ^^^^^^ ^^^^^^ ^^^^^^ (a.k.a. “Sharps“), will be released fall 2014. She was a finalist for The Montreal International Poetry Prize and The Walrus Poetry Prize. Her work has appeared in numerous publications, including Hazlitt, Maisonneuve, and The Walrus. Stevie grew up in Scarborough, owned a small-town bookstore in her twenties, lives by the Mink Mile, and studies psychology.