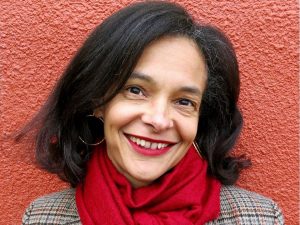 It isn’t often we get to pair “campus novel” with “psychedelic,” yet here we are. In a recent interview with Open Book, Suzette Mayr likened the process of developing her characters to “toss[ing them] into ‘what if’ situations that test and transgress my own inhibitions, limitations, and ideas of common sense.” Mayr applies this notion of exploring “what if”s to setting development as well, making the walls of the humanities department in her fictional Inivea University as fleshy and twisted as the characters themselves. Crawley Hall, “a sentient building that’s trying to kill [Edith],” as Mayr describes in an interview with CBC, is a central character in its own right, undergoing drastic changes as the story moves towards its climax.

In the September 1997 issue of the now-defunct Lingua Franca, Adam Begley asserted that the campus novel had remained essentially unchanged during the half-century of its existence. “Even when you look back more than four decades you’re struck by how little has changed. The novelist’s perspective shifts, but the place itself remains substantially the same.” Mayr writes the university setting through a cracked mirror, using its mutated grounds to suck her characters into madness. Following a newly-formed crack in the basement of Crawley Hall, Edith “pushes forward… tripping her finger over rows of student lockers in dark hallways she’s never seen. Like Crawley Hall’s hallways have sprouted new thumbs, extra knees” (193). The familiar is juxtaposed with the grotesque as the building’s hallowed halls of academia slowly devolve into apocalyptic ruin. Meanwhile, her human characters, such as the eponymous Doctor Edith Vane, remain static to the point of destruction.

Crawley Hall is in many ways also a book about failed human connection, but here she has taken an approach opposite to her previous novel, Monoceros, which was longlisted for the Giller prize in 2011. The seemingly benign  opening line of Crawley Hall: “The washing machine dings in its tiny closet” (10) triggers a butterfly-effect that draws Vane into a spiral of madness. Vane’s fear, or lack of emotional depth, is especially apparent in comparison to Monoceros, where  everything from the poetic prose style to the tormented inner thoughts of each character demonstrates Mayr’s nuanced understanding of how to write grief and failed human connection into her characters. Rather than exploring the feelings associated with failed connection, Mayr appears to strip the University’s humanities department of its humanity. The stasis of the characters who inhabit Crawley Hall is deliberate. The character of Crawley Hall feeds on its own self-made chaos, as Edith’s mental state grows increasingly more precarious.

The prose is rife with nail-biting neuroses and bad acid, each scene a push towards the devolution of Edith’s world: the slow realization that Edith’s telephone-therapist “Vivian” is actually a computer program; the swarming of Crawley Hall with rabbits; Edith hallucinating her own suicide; the ever-growing sentience of the building itself; the list goes on. Mayr’s feverish attention to detail makes for an engaging and original narrative, one that satirizes the typical themes and characters of the campus novel. Her sentences are so visceral that they can’t help but (figuratively and literally) get under your skin: “Edith feels a little dizzy, the smell a wall of scorched chemicals winding up from the heat vent, like someone is reaching his fingers up through her nose and clawing out the inside of her head”. Other lines are hilarious: “life is a perpetual costume party [Edith is] always on the verge of being bounced from.” As we descend into Crawley Hall, recurring patterns spiral into reoccurring nightmares and reach a climax that is as lysergic as it is human. Mayr’s latest reaffirms her status as a masterful storyteller in her exploration of the absurdity and humour of a campus novel gone off the rails. Dr. Edith Vane and the Hares of Crawley Hall is one hell of a hellride.—LEC