Four poems from Dani Couture, excerpted from Listen Before Transmit.

The brain, at first, some chordate
dew worm uprooted

from flooded soil. Later,
it foams a cloud

on the eye, but not
the mind. It leans

or absence changing
the meaning.

My first word was
hereditary.

The second and third:
is it?

When I look at her, I am
looking at a machine

of which I am simply
a component. Not even

something that keeps her
going: toothed gear

or prehistoric swill. To look
ahead is to look her dead

on, straight, a rush of blood
at the back of the eye reflected.

with the same car’s antenna.
A joyride onto the assembly line.

At the assumed midpoint, you open
a book, dart a finger to a sentence.

Take note of who and what’s at play. Draw lines
as the train draws its own. Ouija a future

ghost through the errands of a future day, which,
today is only one: Point A to Point Almost-

B. You could bet lunch on what’s coming
on the lunches you’ve had.

The teenager across the aisle is making
her own notes. She hides her pink-and-white journal

with a carefully angled elbow. Eating a best-before
July 6 sandwich, she already knows everyone

Imagines themselves onto her page. Even poorly
or in passing. You both saw the red fox

streak across the field between the last
two towns. She, like you, is the false centre,

but like Mauna Kea, the best vantage availed.
Near the end, you’ll talk. Wager guesses

at one another’s ages, each off by years
in opposing directions. I don’t have children

is the excuse you offer. She, recently a child,
offers none. Her error, at some point before her birth,

correct. She can’t guess how far you’ve gone
and will not return from. Yours was, at best,

a best guess. Fortune-telling. Or a stone tossed
at the closest moon to turn out the sun’s recurring light.

The husk of a housefly bowled
into the kitchen light like something
in your eye that would cause more harm
than good to remove. Instead,
live with it. Look around it. The lamp
a dish thrown and arrested mid-air.
Suspended by something like regret,
but not quite. Wishing you’d been born
a twin or an owl. Yet, the light is still
mostly light and the singular shadow
invisible under the compound
cloud that cast it. Mostly

you only look up when someone visits.
And when you do, the cloud is fly-
shaped. Your visitors, you assume, note
what you have not removed, invent
excusable excuses. The chair
with its hidden rot. The dark, or height
you’d rather not stand in. Later,
alone, you see the fly, years dead,
as a small, wrecked plane
on your smaller island. It’s a matter
of relativity. You’d call it a blind spot
if it wasn’t the only thing you can see. 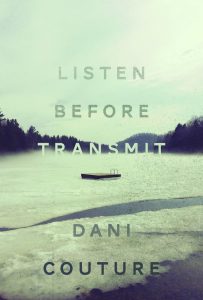 Dani Couture, from Listen Before Transmit, Wolsak & Wynn (2018). Used with permission from the press.