I begin my review of Jan Zwicky’s sonorous Forge with some echolocations—that is, intertextual bricolaging—with excerpts from texts that intersect with the sonic undulations present in Forge. Zwicky’s work welcomes such a reading as her own poetry—including her philosophical texts: Wisdom and Metaphor and Lyric Philosophy—are resonantly interwoven together in polyvocal relation to an archive of other texts, which include philosophical, mathematical, poetic, musical and other wide-ranging traditions. For Zwicky, different wholes can occupy the same space, allowing for new connections to be forged. The first quote that I’d like to add into the polyvocal mix is from Alfonso Lingis’s The Community of Those Who Have Nothing in Common:

It is the rumble and rasping of the inert things that provokes the vocalization of the animals; fish hum with the streams and birds chatter in the crackling of the windy forest. To live is to echo the vibrancy of things. To be, for material things, is to resonate. (96)

The Oxford Companion to Music defines resonance as: “Sympathetic vibration of bodies capable of producing sounds as soon as a pitch similar to that of the body or one of its overtones is heard.” It was happenstance, my reading Lingis the same week as Zwicky, since that particular passage resonated well with Zwicky’s poetic rendering of Pythagoras, from my favourite poem in Forge, “Practicing Bach”:

There is, said Pythagoras, a sound

the planet makes: a kind of music

just outside our hearing, the proportion

and the resonance of things (24)

And lastly, another thematic reverberation from Zwicky’s aphoristic philosophical text, Wisdom and Metaphor:

Metaphor is one way of showing how patterns of meaning in the world intersect and echo one another. (L 6)

Forge is full of echoic poïesis (ποιέω, “to make”) and intersecting metaphoric meanings: the reader/listener is invited to move simultaneously between the outside (the referential material) and inside (the listening text of the text) of each poem, in an act of deep listening. Zwicky serves as an excellent poet-guide who unabashedly embraces the lyric voice (the lyrical “I” appears throughout the text) while exploring topics as vast as the erotic and the esoteric, music and silence, love, nature (human and environmental), and spiritual crisis—turning phenomenological experience into the lyrical echo of poetry. In fact, Forge makes the argument that we live in a world where poetry is still possible; perhaps even essential. Through the musico-poetics of poetic utterance, Forge is a text that carefully welds echoic vocabulary—that is, language which resonates in sympathetic vibration to the multiple overtones of meaning throughout the text—with the hammer of poetry, forging a space where listening on the edge of meaning becomes possible. For listening, as a sense, is described by Jean-Luc Nancy as “always to be on the edge of meaning” (7), which connects nicely to Erin Mouré’s idea that the borders of poetry “are only in ourselves and we move them” (18). Meaning, and the making of poetry, like listening, is an active endeavour to engage with what Lingis calls “the vibrancy of things.”

Forge is largely about the patterns of meaning that emerge and remerge in our lives, which is why the text is replete with reverberations and echolocations— the intention is to find new meaning with each listen. In stepping outside of the guidebook—like Sue Wheeler’s poem “Understory” which begins in the infinitive, “To walk out of the field guide / and listen” (1-2), we are constantly reminded of Zwicky’s listening, as well as our own: “if you listen, you’ll find love” (25); Talk to me, I’m listening (26); “You listen” (49); “The river of your / listening” (50); “The patterns of your life / repeat themselves until you listen” (53). The act of (re)listening becomes particularly mantra-like until we realize that the entire world is listening, chanting even, as Zwicky observes in “Autumn Again”:

I stood a long time at the window

listening: crickets in the darkness,

As Herakleitos reminds us, “All things think and are linked together by thinking;” here, the poetry also seems to say, all things sound and are linked together by sound. Language and poetry are the raw tools a poet uses to make meaning within the world’s thinking, which appropriately sounds rather Bringhurstian (Forge is, after all, dedicated to poet Robert Bringhurst), heard in such lines as, “a truth / that’s on the surface of a thing” (27) and “The partita of the world, the dance of being: everything / has to be possible” (28). In fact, Bringhurst describes language as an ecosystem, as being alive with ontological diversity: “A language is an organism. A weightless, discontinuous organism that lives in the minds and bodies of those who speak it—or from the language’s point of view, in the bodies and minds of those through whom it is able to speak” (163). In viewing language as an ontologically defined ecosystem, poetry becomes an act of conservation— it is about nurturing and finding music in silence, and silence in music, which is, seemingly, a paradox.

Yet, in truth there is no music without silence, and vice versa. Forge is full of paradoxical language: “voiceless and articulate” (17); “the unrung ringing” (24); “Sound / comes out of silence” (50); “silent voice” (53); “Silence […] becomes / a voice” (55). It is through the reader/listener’s reading/listening of silence—of absence—that a poem can take on a third dimension and become whole. In musical notation you can’t have music without the rests (and pianissimos, allegros, etc), and in page-bound poetry you can’t have poetry without the typographic elements (and caesuras, enjambments, etc). In fact, there is not really such a thing as silence, in the purest sense, as evidenced in John Cage’s experimental piece, “4:33,” which although not a single note of “music” was played, the audience and Cage still heard the throbbing, ringings, and squeakings from the movements of their muscles and glands all rippling and rumbling within the open-ended movements of the acoustic atmosphere. Consequently, music and silence sound together to create metaphor and poetry.

Music becomes an eminent vehicle for metaphor in Forge, because as Zwicky states in Wisdom and Metaphor, “A metaphor is to the degree that it is resonant” (L 47). In “Practicing Bach,” Bach’s music becomes “like speech” and music is described “as a geometry of the emotions” (26). For Zwicky, the experience of truth “is always the experience of resonance” (Metaphor L 37), which is expressed in “metaphor’s truth, its charge of meaning, [which] depends on the / assertion of identity and difference” (“Practicing Bach” 29). Identity and difference, and particularly variations of difference within a pattern of the changing same, become important sonic tropes in Forge. Many of the poems themselves take on the musical properties of variation, such as in the poem “Music and Silence: Seven Variations” (which is a meditative poem on music and silence in seven parts), in “Practicing Bach” (which reflects on seven movements of Bach), in “The Art of Fugue” (which is broken into ten separate stanzas), and in “Envoy: Seven Variations” (which is also in seven parts). The entire collection can be read as variations and echolocations of the act of listening to a world that is constantly listening to itself. Thinking metaphorically enables the poet/listener to hear, albeit even fleetingly, a thinking that echoes the shape of the world.

For me, and I can only assume for Zwicky, to forge is to carve a poetic home within the vastness of an attentive world. As Don McKay argues in Vis à Vis, knowledge of home needs “to be balanced with our intuitive sense that home is also the site of our appreciation of the material world, where we lavish attention on its details, where we collaborate with it” (23). Perhaps, and as I hear it, McKay is asking us to think beyond the margins of human language and to enter into the resonance and vibrancy of a world that invites us to sometimes simply (although attentively) listen in order to understand. Once we ask, as the poet does, and in the infinitive, “If the forge was love” (40), then perhaps the great challenge of life and poetry is to learn to “be without a voice” (71), or to give in and “Be nothing” (74). Afterwards, with what are we truly left? Perhaps just:

of what’s left when everything

Lingis, Alphonso. The Community of Those Who Have Nothing in Common. Indianapolis: Indiana UP, 1994. Print. 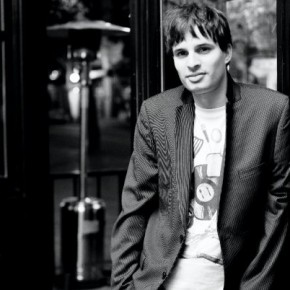 Paul Watkins is a  doctoral student in the University of Guelph’s School of English and Theatre Studies, as well as a doctoral fellow with the Improvisation, Community, and Social Practice (ICASP) project. Currently living in Toronto, Paul is working on a collection of poetry entitled Listenings.