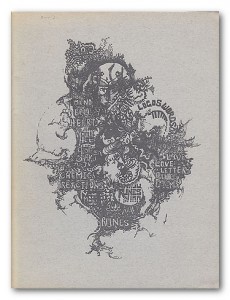 Discussion of concrete poetry tends to centre on male figures—personalities and practices which dominate the discourse. This domination suggests that there isn’t a preponderance of women in concrete poetry and that women the poets who are working in this subgenre must be minor or merely occasional. This is not the case. Building on my “Pulled from my shelves” column in Lemonhound’s previous incarnation, “Abstract / Concrete” will focus on marginalized or underappreciated voices in Canadian and international concrete poetry.

*
Judith Copithorne has published over 40 books, chapbooks and ephemeral items and has sustained a visual poetry practice for over 45 years. Beginning her exploration of concrete poetry in 1961, Copithorne was deeply integrated in the communities around bill bissett’s blewointment magazine and Vancouver’s Sound Gallery, Motion Studio and Intermedia. Copithorne’s early visual poetry—as typified by her Release  (Vancouver: Bau-Xi Gallery, 1969)  Runes  (Vancouver / Toronto: Intermedia / Coach House, 1970) and Arrangements (Vancouver: Intermedia, 1973)—are a braided combination of drawing and writing. These early books are “hand drawn,” as the colophon of Runes explains, “poem-drawings” (as Release is subtitled), occupying the liminal space between poetry and drawing, writing and sketching.

Her exemplary work from the 1960s and 1970s integrates a daily diaristic practice (especially in Arrangements) that documents a domestic space centered on meditation and community. 1969’s Release consists of a series of wisp-like ethereal hand-drawn texts that move through gestural fragments and slights of handwriting accumulated into florid yogic texts that move between mandala and map. The suggestion that her pieces are drawn and not written and are hyphenated poem-drawings speaks to a textual hybridity which places looking on the same plane as reading. With Arrangements, Runes and Release Copithorne creates a visual poetry of looking and reading the domestic and the community. 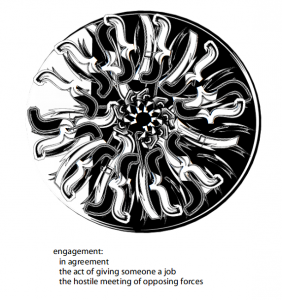 jwcurry’s 1cent #400 “for Judith with Love”  (2009) has an excellent initial bibliography of Copithorne’s work, Copithorne’s poems “Falling as Leap” and “in dream, michael o. waves from the forest”, and the late David UU’s “Poem for Judy C.”

Judith Copithorne’s work, however, isn’t limited to the hand-drawn poem-drawings of the 1960s and 1970s however. She has also written several books of prose and textual poetry, for example: Heart’s Tide (prose, 1972), A Light Character (poetry, 1985) Carbon Dioxide (poetry, 1992) and numerous other editions of visual poetry. Horizon (Pangen Subway Ritual, 1992) displays a beautiful engagement with typewriter, stencil and photocopier degeneration to create a suite of wavering banners of textual detritus.

Recently she has embraced digital means of composition and has had work featured through Ditch and Intermedia.  These digitally-composed pieces which reflect Copithorne’s newer style are crisp mandalas of oversaturated texts—digital stained glass windows which are beautifully dependant on the saturated colours of the computer screen while still echoing the handmade. 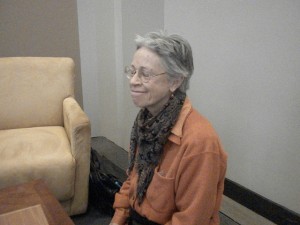