We maintain a critical distance
from the sad spaniel gentlemen

in cravats
on the plaid duvet

at the Custom Hotel,
Los Angeles.

We are so over it.
We fly

from terminal
to terminal

We are almost
money.

We can wait
at high speed.

In the Rae Armantrout poem “Custom,” language is used to create and sustain both thematic and structural paradoxes. Armantrout’s language is precise like a scalpel. It is a language of strategic precision, and with it she creates a delicate effect of imprecision and an almost tangible sense of indeterminacy, which is in itself a paradox. Meaning hums in the wide spaces between fixed definitions of words that come together to contradict and defy each other. Consequently, we walk away from this forty-five word poem with a boggling proliferation of possibilities.

Take a look at the last words of the first six lines: distance, gentlemen, cravats, duvet, Hotel, Los Angeles. These disparate words coalesce to form an atmosphere; a man standing above a tightly-made hotel bed, loosening his tie, in the midst of certain preliminaries. For me, it connotes a sleazy rendez-vous, one we have seen so many times in old black and white Hollywood movies. The casual, breezy reference to Los Angeles grounds the portrait, while the words cravats and gentlemen seem to situate the poem in a past not completely foreign to us.

After this point, the poem resists a one-directional reading as both the markers of time and place disappear. The rug is pulled from under us. In the second half of the poem, Armantrout uses repetition to evoke new ideas: terminal and almost are used twice and in quick succession. Although the word terminal can refer to airports (the speaker’s “we fly,” and “we can wait / at high speed” could represent the act of plane travel itself), the volta-like shift that drives the poem into its second part declares “we are so over it,” suggesting that something – a situation, an episode, an era – has ended. The repetition of terminal as a second definition of death or finality is the nail sealing that coffin shut.

But what is over, exactly? We aren’t quite sure, as the poem resists. I mentioned the connotations of a Hollywood film noir that constructs the basic canvas of the poem. Add to that the repetition of two words which, when placed together, are paradoxical – terminal and almost – and a tension is quietly ushered into the poem. Terminal suggests closure, a limit, while almost is a vast, roomy word (defined abstractly as “all but”). These small paradoxes are found everywhere in the poem. “Custom” conjures up the expression “custom made,” which places it in opposition to the poem’s impersonal scope, its lack of a focalized individuality. Structurally, the concrete first half of the poem is at odds with the more abstract nature of the poem’s second half. The repetition of those two words, terminal and almost, and the paradox they produce, comes to represent the nature of the poem itself.

Who is the “we” referring to? The poem’s beginning places the we and the sad spaniel gentlemen in opposition, since the we “maintain[s] a critical distance” from them. But the poem then breaks this assertiveness through surprising enjambment. “We are almost / money” – is there anything more indeterminate than the line “we are almost”? It might suggest that as people living in the modern world, we are doomed to indeterminacy as traditional social foundations we once relied on – religion, patriarchy, nationalism – can quickly erode.

The title of the poem lets in a fragile light. A custom is something we do over and over again, an act legitimated by its repetition over time. Or a custom can refer to airport customs. It’s also the name of the hotel in the poem. Several definitions can apply, fitting into the poem’s multiple discourses and its ability to function on many levels. For feminist critics, it would be easy to interpret this piece as a critique of a dying patriarchal order: the opposition of the we and the gentlemen suggests a collective feminine experience defined against a traditional masculine figure of authority; the hint of prostitution the Hotel setting suggests, combined with the phrase “we are almost money,” could refer to the notion that historically, women have served as commodities to be exchanged between men in order to establish social dominance. Perhaps this is the custom being shed. I think this reading stands, but so many others do as well. The we could also be inclusive, referring to us all stuck in modernity. The final stanza would then embody the nature of our modern experience: “we can wait / at high speed” suggests immobility and advancement, stillness in the midst of movement.

The point is, all this is beyond the point. In “Farewell,” the last poem in A Season in Hell, Rimbaud warns the poet, “One must be absolutely modern.” For me, “Custom” achieves this through its opacity – it does not state anything, it only mentions, it only utters. I love this poem because of how it operates. Armantrout doesn’t talk to us through language, but rather, she talks to us with language. This poem is not a lyric vehicle for an exhausted “I”. It doesn’t prove a point, it doesn’t argue. It’s a thing uncluttered with innate meaning – it simply evokes. What this poem withholds is what it reveals. 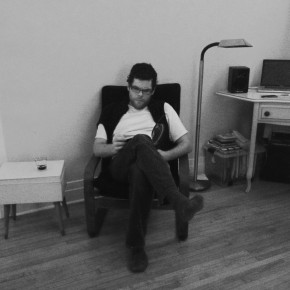 Will Vallières is finishing up his BA in English Lit & Creative Writing at Concordia. He also writes poetry.