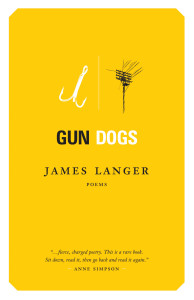 Welcome to On Beauty, a series of interviews with contemporary poets about their relationships to beauty.  An introduction to the project can be found at Poets on Beauty.   The latest poet to tackle the subject is James Langer, whose responses, thick with allusions to poets, writers and theorists of various stripes, also take a personal tack, grounding some of the more abstract ideas in his day-to-day.

I asked Langer the same three questions I’ve asked all the poets:

Langer has chosen to begin by responding to these last two questions with a single short essay.  Here’s what he has to say:

Searching for beauty with spoken intention is akin to seeking a pair of scissors: when you need it, it can’t be found, but when you’re not looking, your surroundings seem filled with points and edges. Recently, I’ve been fortunate enough to have been struck speechless by beauty, a beauty that has offered a great calm and an ability to cut an image of myself that I’m quite content with. This is one of the gifts of beauty, of course. It brings us to a natural expression of ourselves and can fuel one through chaos.

But I’ve also been forced to think of beauty in a rather pedestrian, daily way. Standing in queue at the grocery store with my five-year-old daughter and taking in all the airbrushed, elongated, touched up images in the magazine rack and wondering how to filter this for an impressionable child. There’s no comfort in those moments. Just an instinct to demolish lies. To let someone build their own image of beauty. There’s a poem in Patrick Warner’s latest collection, Perfection, that comes back to me insistently in those moments. The poem is called “Anorexia,” and in it, the voice of that disorder speaks to the audience as the voice of a false ideal of beauty. It’s an ugly, unsettling voice, but it becomes even more so when we discover, through Warner’s use of image and metaphor, that the voice of anorexia thinks of itself as an artist striving for an ideal. The more I think about that poem and its implications, as a poet, the more troublesome these ideas become.

So there’s no absolute truth and no ideal beauty. Can we agree? But this too can be a dangerous thought, since even that Eye of the Beholder logic, generally used to promote the validity of other perspectives, can be twisted to stifle dialogue. It isn’t enough to suggest that beauty gets chalked up to individual choice. Because individuals are often pretty ugly things with even the ability to deform and persecute beauty. Evidence: the twentieth century. Evidence: this new century. So maybe we must be more pragmatic about beauty, but we also need to discuss it, to attempt to agree on what is beautiful in specific manifestations with the understanding that beauty, like truth, is an ever-receding horizon. A democratic beauty? A communicative ethics of beauty? Are we talking Habermas? Whatever. Beauty is nothing if it isn’t civilized (see Keats). Hence poetry. And hence the intention behind your series of questions, Sue.  And hence my discussions of beauty, idling in the aisle, with my beautiful daughter.

So I guess I have to make an argument for something beautiful. A beautiful poem. There are hundreds of contemporary poems that are beautiful, despite the idea that twentieth-century art focused more on the ugliness and torture of modern existence. That’s neither my idea nor a new one. Read it most recently in the opening of Zižek’s The Parallax View. And I’ve written and published some intentionally ugly poems. But this interpretation of twentieth-century art isn’t entirely true, right? (What can be entirely true?) Following this line of thought, I think immediately of Paul Celan’s “Death Fugue” (John Felstiner’s translation, especially, since I don’t read German). The way that poem sings on the doorstep of death and atrocity. Stands up to it even with the deepest sadness. Clutching beauty from the jaws of defeat.

But I want to argue for something different, I think. First I have to lead in and say that beneath all of the divisions within poetry—all the schools and mantras and ideals of form—poetry’s first principle, the thing at its compositional core, is variation. That supersedes all else, in my opinion. Whether we’re avant-garde or new in the old-fashioned way, to paraphrase Frost, I believe we can agree on that core. Verse means turning, and that refers, I think, to more than just considering your line breaks. It’s a contingent idea of beauty, variation. To play with and against what has been deemed beautiful through the tradition. To create something that is recognizable and different simultaneously. And then to offer that thing up to the court of opinion and argument. To public discussion. So you see, my gesture toward communicative ethics, earlier, was something of a groundwork. The whole tradition, with its giants, as we understand it and agree and disagree with it, has been one big argument about what’s beautiful, trying to set and reset and adjust the terms, trying to come to agreements. Too uncomplicated? Well maybe (I know the troubles inherent in “canon”), but at least we’ve been communicative about it through the writing of new poetry and the writing of criticism.

SS:  Can you point me toward a poem you find beautiful? In what way do you think of or experience this poem as beautiful?

Seamus Heaney’s “The Harvest Bow.”  [Due to copyright restrictions the poem can’t be reproduced here, but you can read AND listen to Heaney read “The Harvest Bow” at Harvest Bow]  I’m haunted by the beauty I hear in that poem. It’s written in rhyming couplets (I almost wrote “copulets,” which is kind of a beautiful idea too), and we understand the music of a well-executed rhyming couplet to be beautiful and the argument of the tradition seems to agree with us (as do most songs on your mp3 player). Frost once said, in passing, “the rhymed couplet is the symbol of the whole business.” I agree that the couplet is foundational and beautiful. But Heaney finds his own measures, hides some of the early couplets in off-rhymes so that when we discover the relationship, it surprises us. And that variation, that surprise in the familiar, is a beautiful thing. His rhythms make me feel like a human, a human in a body breathing with humans, or with a human past, and with “the little of our earthly trust” (Bishop). He honours the metrical contract (Hollander, Vision and Resonance)—a malleable contract that roughly outlines what we expect and accept as beauty in the movement of a poem as it relates to other, earlier beautiful poems—and deviates from that contract to make something all its own (Hollander). I find this dance beautiful. Those lines comfort me with the deep tradition—that I’m inside something ancient and civilized and public—and yet keep me alert to the present tense, my place in the language now, and a changing sense of beauty. The poem is really, for me, about the civilizing activity of art, about the way art makes “culture” a verb (Eagleton). This theme is both beautiful and about beauty. And then there’s that fine double-edged line: “The end of art is peace.” Peace. Agreement. Comfort. Collectivity. Civilization. Beauty. Yes?

SS:  A follow-up question:  I’m struck by some overlap between you and American art critic Dave Hickey, though your language is a little different.  You seem to be interested in the notion of a communicative ethics of beauty, and he argues that because beauty is a thing we tend to discuss and feel entitled to discuss, it promotes the kind of communication that is essential to democracy.  For him, this is where much of beauty’s value lies.  I’m not asking you to address his work directly, but I’m wondering if you think that beauty tends to be a matter of discussion and lends itself easily to the development of a practice of communicative ethics.  And I’m wondering whether you think a communicative-ethics approach to beauty is of any use to your daughter as she negotiates the magazine racks.

I’m embarrassed to say I’ve never read Dave Hickey’s work. My ideas about communicative ethics have been derived from a little reading around the thought of world citizenship. But I do think beauty lends itself to the development of communicative ethics, and probably world citizenship for that matter. Perhaps not “easily,” though. Beauty can help settle our sense of ourselves, but it is often an intense or even passionate experience. Emotions are involved. So as audience to another person expressing ideas about beauty, mutual respect and dispassionate argument are vital. Right? And that’s communicative ethics 101. In this sense, discussions of beauty should teach us control. As for my daughter, she’s going through a rather fierce independent stage at the moment and is likely to dismiss my suggestions outright, which is the death knell of communication or the indicator to change the subject. She is fond of the word “beautiful” though. So what I really try to do is simply question her responses. Why is it beautiful? Thus far, I’d say I’ve had mixed results, but it’s a work in progress. I especially don’t argue with her in the aisle. But I let her listen to me argue with the magazines. And my argument isn’t a new one, it’s in agreement with others. The gist being: the model on the cover of Cosmopolitan this month may very well be beautiful, but the medium, the manipulation of her image, is arguing otherwise. Those doctored images argue that we, none of us, can achieve beauty as ourselves, and that’s a pretty irrational and uncivilized argument, if you ask me.

James Langer‘s first collection of poetry, Gun Dogs, was published by Anansi in 2009. He lives in St. John’s, Newfoundland.