Robin Richardson is the author of Grunt of the Minotaur (Insomniac Press) and the forthcoming Knife Throwing Through Self-Hypnosis (ECW Press). Her work has appeared in or is forthcoming in many journals including Tin House, Arc, The Berkeley Poetry Review, The Malahat Review, and The Cortland Review. Her work has been shortlisted for the ReLit award, longlisted for the CBC Poetry Award, and has won the John B. Santoianni Award (awarded by The Academy of American Poets) and the Joan T. Baldwin Award. Robin Richardson holds an MFA in poetry from Sarah Lawrence College and divides her time between New York and Toronto. You can read some of her work here. She’s also the voice behind the @CanaryCalamity twitter account, where, as Martha Jane Canary, she tweets individual lines from her forthcoming book of poems. Read Canary’s feed ten or twenty tweets at a time and you’ll start to feel like you’re watching a small tornado touch land for half a second, then disappear completely, over and over again.

Emma Healey: I think the thing that’s been on my mind the most as I’ve become acquainted with your work is the idea of the line-as-unit vs., or with respect to, the poem-as-a-whole. I first came to your work through @CanaryCalamity, and then sought out your poems – so the thing that I knew first about your writing was the particular and really engaging nature of your individual lines. The tweets seem very self-contained – they’ve got this gorgeous, strange musicality to them, and the voice that’s built up through the twitter feed itself seems really consistent and various at the same time, I guess the same way a real person’s voice comes through in their twitter. Disparate but entirely linked units. 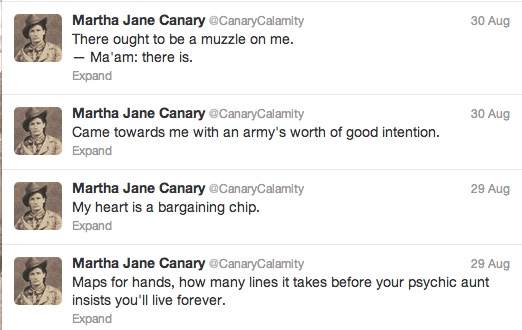 When I learned that the lines on twitter were all taken from your forthcoming book, I was a bit surprised – I feel like a lot of poets would have a difficult time separating individual lines from their poems like that. Are all the tweets in that account from the book? Did you find that doing the twitter changed your relationship to the poems in the book, or to ideas of line, context, form in general?

Robin Richardson: The account began as something separate from my manuscript. I wanted a playground for lines and ideas as they came to me, and decided twitter was the best place for that. At first I made each tweet up on the spot, then as they accumulated I noticed that some of the work from my book would fit in nicely with the persona I’d established as Calamity. Soon I started plucking lines from my poems for twitter, and likewise, pillaging lines from twitter for my poetry, until eventually the two became pretty much the same thing.

I’m glad you find each tweet to be a stand-alone piece. That’s what I aim for in my work: each line should be strong on its own, and when added to the whole, come together to make something just as sturdy. I’ve found this project has been great for helping me see, and accomplish that.

In as far as presenting the lines on their own goes, I felt liberated by the process. One of the most valuable things I’ve learned about poetry is not to treat it like it’s so damn precious. I amputated poem after poem, scattered the limbs daily for strangers to see, maybe even to scrutinize, and felt increasingly cathartic about the whole thing. It’s liberating, and helped loosen a lot of the muscles I had flexed too tight.

EH: What do you look for or love in a line? Do you start with a sound or a word and build out? Has transposing your lines to twitter, or writing them for it, changed the way you think about these things at all?

RR: I was always meticulous about individual lines, but having to make them stand on their own made me think about their function on a whole new level. Every time I post a tweet I ask to myself “is this musically cohesive?” “Does it resonate content-wise without its context?” and most importantly, “Does it give the reader something more than what’s contained in its 140 characters?” This last consideration is what’s really improved how I approach writing. I don’t want these tweets to be clever little quips, or single thoughts that make a person sigh or chuckle. I want them to open infinitely off the edges of the page, or screen, so that each new tweet is the key to its own, much larger universe. Alice Munro is brilliant at this: in a single gesture or off-handed comment her characters inflate before the reader’s eyes, becoming fully realized within those few strokes. Poetry, if anything, should do the same in even fewer strokes.

Another, extremely important consideration for me is sound. I need a line to resonate musically as a whole, satisfying unit. I read each tweet about a dozen times before I post it, often re-ordering, re-wording until it sounds just right. I love this part of the process. I sit at my desk, tapping the edge of a rocks glass, straining until finally a thing goes from floating notions to a fully realized, living line: it sings. Its metre compliments its contents in such a way that the whole things now seems inevitable. That’s when a line is good to tweet, or to be added to a poem. Then it’s a matter of making the whole damn poem sing the same way, which is one of the most difficult and addictive tasks I can think of.

EH: The idea of Calamity’s tweets and lines from your own poems starting off separate and then eventually converging is really interesting to me, because Calamity seems to have a pretty strong voice of her own. Do you think there are things that came from building out that voice, or having that twitter account as an outlet, that ended up informing or shaping the book in ways you wouldn’t have expected? Was working through Calamity more freeing because the lines weren’t attached to your name, your picture, etc. or was it more restrictive because you were working with, in a sense, someone else?

RR: There’s no question that Calamity has strengthened my own voice. As Robin Richardson I’m too inhibited by other’s opinions, as much as I wish it weren’t the case, am often afraid of stepping on toes, burning bridges, saying things I might regret, etc. With the anonymity Calamity allows me I can say and do whatever I want, and that should be true/ is true now of my voice in poetry. Calamity is hard and loose with her words, and is unabashedly feeling. After writing as her for several months now I can honestly say it’s changed not only my writing but me as a person, for the better.

There’s another distinction I’ve noticed between Calamity and myself, which is something I was curious about when I began all of this: The reception that Calamity received as a mysterious, faceless figure was far greater in many ways than what I’ve received for the same words as Robin Richardson. I think when the knowledge that the author is a young woman is stripped from the reader he or she is open to the work in a different way. This is only a theory but I find it very interesting and intend to play with it more.

EH: I think when people talk about twitter as a form or a constraint, they tend to focus on issues of content, restriction, what-can-you-do-with-140-characters, as opposed to the issues of identity that it raises. I often find myself thinking that as a writer it’d probably be good for me to quit twitter – I find myself phrasing things or picking words or censoring or exaggerating based on what I think other people will find funny or will respond to. I mean, I guess that’s just a kind of miniature version of the writing process in general, maybe? Tuning out the noise, figuring out your own voice amid the sea-roar of Everything Else.

Can you talk a bit more about the difference in response to Calamity vs. things you yourself have tweeted or written in the past? Because that’s the other thing that fascinates me – and scares me, too – the idea that once people don’t know as much about you, especially if you are a young woman, that they’ll respond differently to your work. What kind of difference has there been? Did it surprise you? How do you want to work with it in the future, maybe?

RR: It’s funny you mention the anxiety of twitter and other social media, as that anxiety is one of the main reasons I created an anonymous account to work through. I spend hours each day rummaging through the internet for interesting tidbits and new trends. I think it’s as important to be aware of all that messy online terrain as it is to know your own mind. That’s the best thing about existing as both Calamity and Robin. Calamity writes with zero regard for anyone but herself. She is unapologetic, and has no fear of failure; she doesn’t exist so it’s not an issue, nothing is, except indulging in the words she likes best, in the order she likes best.

I wanted to say that being Robin online is pretty great too, I get to quote Honey Boo Boo and whine about the weather, but honestly it’s not the same as it was before this exercise. I’m wanting to become more unabashed and uninhibited as myself too, though it’s a slower process and takes a lot more guts. I’m on my way though, and am glad of it.

The difference in reception between Calamity and Robin is pretty simple. I’ve received positive feedback as both; the key distinction is that in response to my writing as Robin people have been known to offer “words of wisdom,” or tell me I’m doing a good job for where I’m at. No ever talks to Calamity like that.

I also wonder if people tend to judge based on a person’s biography before giving the work a fair chance. This isn’t something I can discover through the account, but it was one of the reasons I started it. I fear sometimes that when someone sees a book, or a piece of writing, they check the biography of the author, and I can’t help thinking that finding out the author is a twenty seven-year-old woman who lives in Canada and likes to wear pretty dresses might effect whether or not one gives the writing a fair chance.

I have no specific plans yet, but I’d like to work under a few more pseudonyms for the fun of finding out what the best face is for my work. Though the hope is that in time, the best face will be my own.

__________
Emma Healey has appeared on Lemon Hound in more than one capacity. She is the founding editor of The Incongruous Quarterly and the author of Begin With The End In Mind.