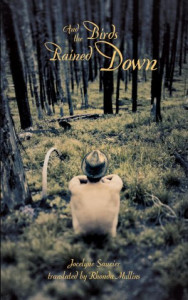 As I began organizing my thoughts for this piece, it became clear to me that a straightforward review structure – whether “summarize and contextualize” or “argue-summarize” or “summarize-examine-explain” – would not do justice to Jocelyne Saucier’s novel, which is itself unusual in its form, its story, and its delicate integration of images and ideas. The text is not fragmentary, but it does jump and play, eliding any attempt to organize it into a chronological series of events or linear argument. That back-and-forthness, that dreaminess, is part of its beauty. And though I could not hope to quite mimic it in a review, I thought it made sense to present my experience with the book in a manner that is empathetic with the novel’s formal preoccupations.

When I think about And the Birds Rained Down (Coach House Books, 2012), the first image that should come into my head is tall trees, viewed from below; or a cabin by a lakeshore; or an old woman nestled in a bed of furs. These would be appropriate, proper, because they actually emerge from the book’s landscape. But in fact the first image that comes to my mind is a room with two facing mirrors, reflecting one another endlessly. Doubles upon doubles.

This is an image that has its roots not in Saucier’s actual story, but in her storytelling technique. We encounter any number of pairs, juxtapositions, in the course of the novel (really: I tried to map them all out, and stopped after twenty-five minutes or so of continuous listing), though they come to us less as identical reflections and more as participants in a dialectic. Femininity speaking to masculinity; civilization to nature; love of the self to love of the other.

Still, one thing the mirror image gets right is the way in which the interlocutors in these dialectics expand one another. Make themselves, through conversation, into something infinite .

Saucier’s novel is broken up not only into chapters, but also sections of italicized and non-italicized text. The italics come first, and tell us how to read what is coming – from the outset, for instance, we’re told to expect “a story of three souls in love with freedom” (7). These sections give us some sense of grounding in a narrative that is light on action, and deals instead with imagistic, personal moments in history and islands of stolen time. As the book progresses, the two types of text come into conversation with one another and become intertwined, even share tactics: the “plot” sections take on the romantic, conversational tone of the italics, and the italics look in on characters and scenes.

This formal choice gives Saucier’s book the feeling of being larger than it technically is – its grand aims are evoked through a text that is always revisiting and reconsidering itself.

The novel’s story is deceptively simple – in summary it loses many of the rich strands, which contribute to its thematic weight without offering much in the way of forward momentum. But to understand how Saucier explores ideas – like the relative value of self-determination and human connection – you must know the basics. Two men, Tom and Charlie, live alone in the woods of Northern Ontario, having abandoned their ordinary lives to choose how they spend their last years, and choose (importantly) how they will die. Any essentials they can’t grow, hunt, or build for themselves are brought in by two men who grow pot in the forest – a “farm” that Tom and Charlie protect, and which in turn supports them.

Their solitude is disrupted by the arrival of two women – one, a photographer looking for Tom and Charlie’s recently deceased friend Ted Boychuck, who in his youth survived a catastrophic fire; and one an escapee from an asylum where she has been confined for much of her life.

Even minute pieces of language do load-bearing work in the book. Take, for example, Rhonda Mullins’s translation, which accomplishes what any good translation must – making itself invisible, natural. Letting the thematic intensity of the original text breathe through a foreign tongue. Her facility finds its best and most visible expression, however, in an element of the novel she chooses not to translate: the names of the two women, Marie-Desneige and Ange-Aimée (the erstwhile resident of the asylum and the photographer, respectively). The names are playful in any language: Mary of the Snows and the Angel of Love, or, taken together, ange and neige, a Snow Angel. But within the context of this translation, they are more consequential in the original French, allowing an English-speaking audience to feel their foreignness.

This is vital because neither is the woman’s true name. They’re chosen by Marie-Desneige to mirror other inmates she had affection for in her psychiatric ward – to the women, thus, they are foreign. By calling attention to the names in this way, Mullins amplifies their thematic content, and shows herself to be in tune with the poetry of Saucier’s writing. She also calls attention to the fact that there are always two versions of these women present: the people they choose to be in the woods, and the people they were before. (Which, taken together, give off a shimmer of a third possible set of women: the people they might, in the future, become.)

Self-determination is a major subject of And the Birds Rained Down, something all its characters are seeking. But Saucier turns her hideaway in the woods into more than a summer camp for people looking to escape the world’s order, in part by bringing all the characters together and letting their different notions of freedom chafe against one another. Marie-Desneige and Charlie, for instance, become lovers, forcing Charlie to face a question: what happens to a commitment to personal liberty when you meet someone from whom you want to make sacrifices of will?

“Leaving without insisting on goodbyes is a sign of respect for those you leave behind. Goodbyes do no one any good. And then [Charlie] thought of Marie-Desneige. If one of them were to die – and it would happen, it had to happen one day – on that day would he be willing to part without a goodbye?” (121-2).

Saucier seems to suggest that the important thing is the willingness to shrug any set of rules that impede your desires – including those you’ve set yourself – and the form of her novel plays this out. She enlarges both the characters and historical events she treats by rejecting all sense of “grand narrative” (or singular personal identity) in favor of a story constructed of strands, echoes, memories, and layers. Her empathy is towards complexity, not infallibility.

Look, for instance at the Great Matheson Fire, which we learn of first through the lens of Ange-Aimée’s interest, then through a series of paintings Ted left behind, and finally through the recollections of other survivors who Ange-Aimée interviews as part of her project. No one picture is complete without being considered against the rest – they differ slightly in detail and texture. And yet, taken together they keep the fire alive, keep it burning.

Adrienne Celt is a writer living in Tucson, Arizona. Her fiction appears or is forthcoming in Esquire, Puerto del Sol, Blackbird, The Southeast Review, Carve Magazine, and other journals. Her webcomic appears weekly at loveamongthelampreys.com.