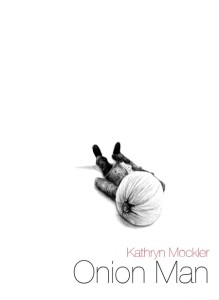 The individual poems of Kathryn Mockler’s Onion Man, which hover between a novel in verse and a long poem sequence, appear on the page in vertical chunks of text, rarely taking up a whole page or even venturing out into a long poetic line. One reviewer has compared the poems’ appearance to the cans of corn produced at the factory at which the protagonist works, and while that is true, the silence around each poem is as intriguing – and as fiercely frustrating – as the poems themselves. This unused space stands out as an eloquent refusal to explain; and it says everything about how young working-class women are trained to think about the future: as full of nothing.

Onion Man takes as its material a young, working-class woman’s summer of factory work in London, Ontario, replicated by a relentless roll of pages showing the protagonist getting stoned with her possessive boyfriend Clinton, while keeping one eye on her alcoholic pack-rat mother, and offering snippets of her own bleak philosophy. Mockler is a dab hand at the art of the deadpan statement, and the gaunt poems often imply the protagonist’s concern with what she knows is wrong, but can’t quite summon the language to contest:

Clinton thinks /that working /is better than / being in high /school. I don’t /agree at all, /but if I tell him /I don’t mind /high school, / he’ll think I’m /conforming.

The irony of Clinton styling himself as a non-conformist, based almost solely on the fact that he has quit high school, is characteristic of how Mockler skirts the temptation to solve problems in Onion Man and instead explores the language of not knowing how to form the question of “Is this all there is?”

Not enough has been written – particularly in the last few decades – about this kind of life, a version of the ones lived by so many young working-class women, whose apparently directionless futures have been made so not through their own lack of imagination, but the lack of imagination of those around them. In Catcher in the Rye, Holden’s privilege prefaces and ironizes nearly everything about his “breakdown,” but Onion Man explores an adolescent reality in which attention has not yet acquired the status of a currency. Mockler’s tone parses the distance between expectation and access, and details press down with the oppressiveness of Southwestern Ontario’s humidity: Clinton’s unformed but insistent plan to drive to the west coast because everything’s better there; the inability to save money; the horrible-hilarious “intervention” staged by her mother’s co-workers; the unnameable otherness of the man who eats onions in the factory’s break room.

Though the structure and the language appear simple throughout Onion Man, Mockler is definitely manipulating readers’ expectations of both poetry and prose. This is poetry that does not reach for the lyric, though the lyric emerges in the harsh portraits of working-class life, like the protagonist’s invention of the onion man’s wife, a woman with “thick arms with which she lays down/ layers of cool white sheets.” But the text also does not offer a complete story with peaks and valleys of action and resolution. The narrative is built on the terrible sameness of the days, the petty rip-offs and injustices of the factory, the stark wrongness of the future that the intermittently abusive Clinton predicts, and the awfulness of nearly every adult in the book. Mockler does not lean on tension or suspense in this book, but instead she has the courage to gaze long and hard at pointlessness. Without the privilege of a belief in the future – a middle-class luxury to which not all working-class teens have access – the protagonist of Onion Man is a Bildungsroman heroine for the end of the twentieth century. She knows how her life is going to turn out, and finds it neither tragic nor freeing. It is as though Mockler has written a distant cousin to Alice Munro’s Del in Lives of Girls and Women. Like Del, Mockler’s narrator is a young woman who never really believed in “love or scholarships,” but is nudged into understanding the future will happen whether she plans for it or not; unlike Del, she lives an epiphany-free existence.

Mockler’s language is refreshingly free of the explanations and the overt descriptions of much narrative prose, and offers a view of the summer job with all of its hallucinogenic boredom, with line breaks in mid-phrase showing the yawning gaps in the protagonist’s mind. The seemingly-endless scroll of days takes centre stage in this book and emerges, almost slyly, as the subject of the text. Onion Man shows the protagonist slowly moving towards the idea of thinking beyond people’s expectations for her. Although this book does not trumpet its feminist politics, they are richly constitutive of the text’s tone of resistance, especially when it comes to the otherness of the eponymous character. He is a fellow worker at the factory, a man who never speaks but sits quietly in the shared break room peeling and eating a raw onion with his dinner. He is the one adult in the text who does not behave badly, the protagonist’s interest in him is a subtle spark in the stoned dullness of the summer when every question about her future seems null. The onion man also, wordlessly, seems to share her wish to disappear and their strange communion allows the articulation of her unease: “The future is like walking into a river and /not knowing whether you will step on leeches/ or sand.” Mockler has written a book that refuses to answer those questions, and not only unapologetically makes gritty poetry from that state of not knowing, but even suggests that standing on leeches is a way to start to think.