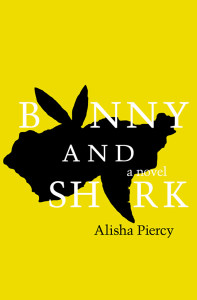 Malcolm Sutton (MS): Your new novel, Bunny and Shark (BookThug 2014), centres on a Playboy Bunny who is thrown out, in a most dramatic and violent gesture, by her long-time lover. This happens to her at a critical moment in her life: when her power over men is diminishing as her body becomes less desirable to them. Yet you allow this moment to be full of enormous transformation potential. What drew you to the figure of a Playboy Bunny to explore (fairly radical) transformation?

Alisha Piercy (AP): In L’Avventura (1960), we observe a gradual evolution of thought and the slow unfolding of a relationship between the secondary characters as they permeate a tropical landscape while looking for the main character, a sensual and aloof woman, who disappears at the outset of the film. Disappearing women is a theme in Antonioni’s films. While I find this an intriguing, artistic symbol, I also know it to be bitingly real. When I was last in the Caribbean, an ex-Playboy Bunny told me a story very matter-of-factly about a local woman who had disappeared on the island’s lowlands one night. Her vanishing was so complete that the evidence of foul-play lost all implication. While being pursued, she had made a phone call to a wrong number. The recipient of that call was so haunted by the sound of her voice that they tried for days to figure out who she was, to question the authorities, and to ask everyone on the island if they knew of anyone who had gone missing. Whoever she was, both she and her assailant seemed to have turned to vapour. I spent the rest of my trip picturing this unknown woman. What could that look like to be a middle-aged woman who recedes all of a sudden out of view? I wanted, more than anything, to imagine her still on the island somewhere, maybe hiding, but perhaps also having come back in another form.

The Playboy Bunny is a crude metaphor for how we value beauty in women above all else. Gloria Steinem’s 1963 reportage ‘A Bunny’s Tale’ gives an intimate glimpse into the Playboy machine: she became a Bunny herself, living the life secretly to get the most accurate story possible. Most of these women had to work their way up some perilous trenches, never reaching the commonly known image of being centerfold models for the magazine, and the Bunnies I know worked very hard as cigarette girls, waitresses, and card-dealers; they were objectified as desirable bodies, and sometimes also sexually exploited. That Steinem’s brilliant hands-on reportage was met with ultimate contempt—”because I had now become a Bunny—and it didn’t matter why”—still has relevance today. I wonder if the lingering image of the Bunny as the decadent, multivalent body isn’t still an authentic parody of the capitalist machine?

The Bunnies from the ’80s I’ve known are astute, resourceful, and have, for the most part, been left at one point or another by their husbands. Their transformation from glamour girls—as witnessed in their photo albums—to middle-aged women who deny their pasts, both horrifies and fascinates me. In an attempt to disassociate from an identity that is almost singularly tied to beauty—and that no longer fits with the ageing woman, there is nothing to be done but to remake themselves.

In Bunny and Shark I wanted the woman who disappears to remain relentlessly present in the fiction. She is at first that listless, lost, erasable kind of woman, but then survives being cast out by inhabiting disappearance. In an outcome that is neither happy nor tragic, Bunny uses ‘ghost’ power for both terror and transformation.

MS: As Bunny loses the social and material resources she’s long been dependent on—her wealth and connections—she turns to breaking into yachts and living off her findings. She becomes a kind of vagabond. What is it about the vagabond that is so appealing to us at this moment in history?

AP: Like the gruesome tales of Grimm suggest: in the end, human nature is greedy and instinctual. Society, by its design, intends to off-set the chaos of unbridled instinct and passion, and this leads to a hole that is rarely seen or spoken of in social dynamics. There is this hole in our society, an unspoken epidemic that everyone accepts—in Bunny’s case, it is the disappearing of the more mature, wiser woman, the woman who gets cast out of the capitalist, patriarchal world when she becomes too powerful, and therefore, too dangerous.

How many women are close to the edge of tipping-over into the state of vagabond? I wondered. How would it be to live the moment of exile when it’s so invisible? Abandoned women who become homeless are not part of some ancient scapegoat ritual that is regarded by society with ceremony. The dull, ordinariness of being cast-out, and warned to quickly pull it together—to preserve the collective need for peace and happiness and a semblance of order that conforms, in the case of female vagabondism, to uncomplaining, castaway decorum/politesse—is a disorienting predicament for many.

Being a vagabond, a ‘ghost,’ and ‘dead’ means freedom. In fairytales, the most grisly of incidents signals an urgent need for transformation. For some days Bunny lives in a state of visioning, where she observes and even ‘feels’ her ghostly limb carrying on without her. She remembers the empowerment she felt from swimming in the ocean with no intermediary (a boat) between her body and the waters; she imagines the foot taking its necessary path into the shark’s mouth and through its body and then outwards. The digestion of her body into the ambient body of the island—and in particular, into a creature whose ecosystem is unfathomable in its enormity—the ocean—is precisely why Bunny manages to survive and live differently within it. It is the ocean that can devour islands, and provide mysterious appearances of dolphins who save her, it is the ultimate dissolver of all things, the landscape that will swallow both shark and human limb. It is a naturalistic metaphor for a transformational process.

MS: There are a surprising number of violent encounters in the novel, and Bunny is not always on the receiving end. Midway through the novel, for instance, she cracks a bottle against a guy’s head, and not really in self-defense. Was it difficult to write scenes of violence such as this one? Was it important to show the protagonist as not above the violence of the world she inhabits?

AP: I can see how there is a temptation to equate Bunny’s need to survive with her consequent expressions of violence, but in fact, Bunny’s true anger or frustration is rare, and then when it exists—is rarely directed at its source. When Bunny cracks the bottle over the guy’s head, nothing is actually ‘blocked’ or ‘frustrated’ enough to cause Bunny to erupt into violence. Her encounter with the willing man could have been an easy route back into her old life. But when faced with a real opportunity to ‘return,’ Bunny doesn’t choose her old way of life. It is her rejection of this that is violent, and that violence is symbolic and even beautiful. It’s like she’s testing how far into nothingness and random acts she can go; she tests the edges of her invisibility to see if it’s true.

Bunny is finally free for the first time in her life because she is cut loose—and here, in this true human state, we are witnessing the animal. Random, meaningless acts of violence in women are even more shocking to a society that chooses to look at women in only one way. With Bunny’s slightly detached, almost visionary and never-deadly approach to violence, there might be something important to say too about the shock value of a violent woman. This is the privilege of the scapegoat and is the place where instinct and aggression meet, I think, in the survival game.

MS: The novel is set against the backdrop of a very particular kind of economy, one that has allowed certain characters, including Bunny, to partake in a luxurious lifestyle. Could you speak a little about land ownership of the fictional Caribbean island?

AP: Those born or with ties to the Caribbean are, by ‘family law’ (a separate system of jurisdiction born out of the post-slave-era that remains, to this day, impenetrable and intact), allotted a plot of land, no matter what or how little original island blood they carry. The land can be claimed at some point in their lifetime: it is a curious phenomenon because island-born Euro-raised children are able to ‘come back’ for land claims. I was intrigued by a) the ontological idea of being a ‘transnational’ and wondered how that displacement would feel, and then b) how the islanders who never left for Europe or North America would feel about this entitlement and ‘return.’ The young man Bunny becomes friends with is back to the fictional island to make one such claim.

Bunny doesn’t ‘map’ the island by describing to the reader its geographical parts or variations. Bunny ‘tours’ the island with her body, telling us only the ordinary, everyday movements, as she tries to reinvent a way to ‘belong’ to a place she has become disenfranchised from. My hope was that, by telling a story—a more experiential story of embodiment—I would not be un-telling any colonial histories held by the Caribbean islands, but rather I’d be facilitating an amalgam of those histories to drip from the bottom of the story upwards. The condition of having become homeless and marginalized seeps straight up from the ocean into Bunny’s own trouble. Once an exploiter of her island’s salable lands, the space around the island itself plots to have her thrust into the arms of those she would have sold-out on, and yet, this is not punishment in some retributive or righteous sense because it is from the ‘family’ that she learns how exert the authority over a space without abusing power (for a change).

MS: Did you encounter any difficulties in setting the novel on a fictional Caribbean island? By this I mean, how did you avoid the potential pitfalls romantic/colonial stereotypes?

AP: The island-romance cliché you speak of—the exoticism of the Caribbean and the association of space with the ‘coloured’ feminine landscape that is penetrated figuratively by the colonial white male —while I am aware of this canon, Bunny, to me, is the epitome of a whole other, capitalist version of the feminine presence on those islands. Her work as a character is to fall from grace and to also penetrate the island landscape. This also has its own canon—but it’s usually a marginalized male character who returns with ‘good’ intentions to re-appropriate what, to him, feels like an illegitimate claim. My intention was to make her presence somehow undo, resource-from, enable, and de-authorize the physical space of the island as we know it by making what is ‘outside,’ not even the island itself, claim her (instead of the reverse) as its new homeland. Later, by understanding the culture of the family land holders, she is able to reimagine the possibility of inhabiting the land again in another way, but her own culture, having cast her out, offers no default entitlement. Instead, Bunny’s only recourse is to become a whole Other kind of Other whose story is spatial.

MS: What comes next?

AP: My next story tracks the short trajectory taken from the International airport located on the island of Chek Lap Kok, to the enclosed space of a Hong Kong woman’s apartments. What happens takes ten days to unfold.

Alisha Piercy works as a writer and visual artist in Montreal. Her second book, You have hair like flags (Your Lips to Mine Press) won the bpNichol Chapbook Award in 2010. Bunny and Shark is her first novel. 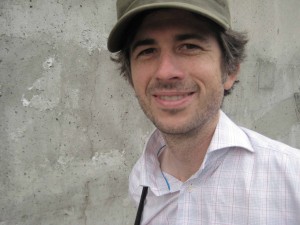 Malcolm Sutton is BookThug Press’s fiction editor. His writing has appeared in C Magazine, Border Crossings, Maisonneuve and elsewhere. He teaches various forms of writing at universities in Toronto.