As long as you keep an open mind
about the thing you seek,
it’s always in the first place you look.

Gabe Foreman, A Complete Encyclopedia of Different Types of People

“The rich have kleptomania, while the poor are taken down with larceny.”

“Kleptomania,” defined in the Merriam Webster Dictionary as “a persistent neurotic impulse to steal especially without economic motive” can also be understood through its usage beginning in the early 19th century as a term for thievery whereby the privileged classes often claimed a psychological motive for criminal misbehaviour (Online Etymological Dictionary). According to Jenny Diski’s article “The Secret Shopper,” “The first attempt to explain why rich people might steal things they didn’t need came in 1816, when a Swiss psychologist named Andre Matthey coined the word ‘klopemania,’ which later became ‘kleptomania.’ The new disease allowed apparently irrational and illegal behavior to be acknowledged in public while releasing people given the diagnosis from responsibility for their actions.”

Looking beneath the surface of Gabe Foreman’s seemingly fatuous three-line poem, “Kleptomaniacs,” we are invited to rethink this “neurotic impulse” from an ambiguous point of view. By employing ironic diction and inverting common assumptions, Foreman builds upon this 19th century notion of kleptomania, as a regrettable though excusable peccadillo, to envision this kind of theft as a sophisticated act only a member of the enlightened classes could commit.

Foreman’s use of the second-person point of view creates an insidiously shifty mode of address. Is the speaker implicitly split into two personae—a latent ‘I’ in conversation with him/herself in the form of the evident “you,” thus situating the reader as a kind of third-party voyeur to a private conversation? Or is the speaker addressing the reader directly—the speaker’s unfolding logic based on a priori knowledge of, and a complicit stance towards, the reader’s criminal tendencies? A third possibility exists, thanks in part to the title, where a certain class of people, namely “kleptomaniacs”—an external group to which neither the speaker nor the reader truly belongs—is being referred to via the pronoun “you.”

This tricky perspective works to destabilize, and so problematize, the moral stance of the poem: Does the speaker possess an insider’s knowledge of kleptomania, presenting it not as a reprehensible habit but as the admirable knack of keeping “an open mind”? Or is the speaker talking as an outsider, wryly documenting the clever mental convolutions of the self-justifying criminal? Is the reader (whomever/wherever the ‘reader’ may be) being sarcastically cautioned, slyly included, or cheekily reprimanded? Whatever the case, the reader is invited in, as a sort of co-conspirator, to participate in a mental exercise where assumptions about criminality are inverted, and where thievery becomes a liberated act of ‘seeking’ which already contains the assurance—the “always”—of its own fulfillment.

Beginning with the rhetorical equivalent of a conditional promise, the poem’s opening premise, “As long as you keep an open mind…” seems mildly patronizing, implicitly chastising the reader lest one reveal oneself to be ‘close-minded’. If the promise of the poem is to be realized, the reader must first nurture and sustain a state of mental receptivity. No base criminal pursuit— kleptomania requires its practitioners to be liberated in thought as well as in action. And by the end of the poem, for the fulfillment of the reader’s ‘seeking’ to have occurred, his/her assumptions, not only about the nature of the klepto’s mindset but the nature of the act itself, must have been upended.

In the second line, the word choice of “seek” carries with it noble connotations, of ‘seeking’ one’s fortune, of spiritual ‘seeking,’ and perhaps even echoes the immortal lines, as spoken by Ulysses in Tennyson’s eponymous poem, “To strive, to seek, to find, and not to yield.” Ensconced in such an idiom, kleptomania can’t simply denote an impulsive or nefarious tendency, but rather gestures towards a sort of heroic visionary questing. Furthermore, what is being sought, described simply as “the thing,” remains totally ambiguous, free from the utilitarian constraints of prosaic description, and so full of latent possibilities.

Foreman’s kleptomaniac, whoever s/he is and whatever our affiliations with her/him are, is compelling. Rather than sneaking around in a shadowy underworld with common and unimaginative lower-class felons, s/he is elevated to the stature of noble seeker who, through an enlightened outlook, is able to transform the world—whatever “first place” s/he looks—into the unlimited potentiality of her/his own gratification. In the end, the act of stealing is only a logical extension of a liberated consciousness, while the slippery and conspiratorial point of view handily eludes any extrinsic ethical quandaries.

This little poem is bigger than it looks. Thinking of Foreman’s book title, A Complete Encyclopedia of Different Types of People, it might be worthwhile to consider what different (or similar) types of “people” he could have portrayed if, instead of calling this poem “Kleptomaniacs,” he titled it “Investment Bankers” or “Corporate Executives” or “Presidential Candidates” or even “Close Readers”? This little poem might make us wonder about how many types of falsehoods and hoaxes are unendingly glossed over, rationalized, and couched in noble sounding proclamations, propositions, and promises. As our Swiss physician Matthey once said, “the thieving tendency triumphs; it subjugates the will” (Fullerton).

Of course, none of this has been a critique of Foreman’s poetry per se. Suffice it to say that, if you keep an open mind, his book (wherein lies this three-lined microcosmic gem) has everything (and everyone) you need. 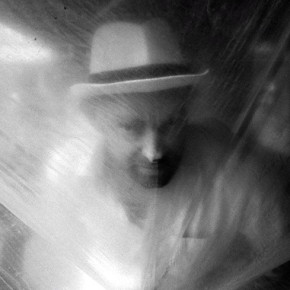 Chris Hutchinson was born in Montreal, grew up in Vancouver, and has since pursued various livelihoods and made his home in such places as Dawson City, Kelowna, New York City, and most recently, Houston, Texas where he is a PhD candidate in Creative Writing/Literature at the University of Houston. He is the author of three books of poetry, all published in Canada, most recently, A Brief History of the Short-lived (Nightwood Editions, 2012).