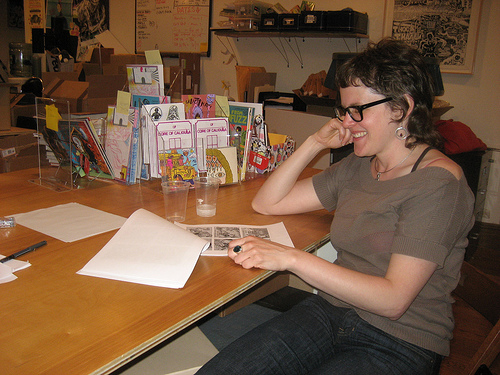 Julie Doucet is a Montreal-based artist who reached an international audience with her personal and innovative comics from the ’80s and ’90s. While her comics work is considered groundbreaking and continues to influence new generations of artists, Doucet quit drawing comics around 1999 and has since worked in a number of other art forms.

Frederik Byrn Køhlert: Can you tell me a little about your current projects? I know you have been screen-printing, doing collages, publishing a large number of mini-zines, doing illustration work, and making short abstract animation projects, in some cases in collaboration with others. Compared to your earlier career when you mostly made comics, this is a very wide variety of work. Was that a conscious choice, or was it just something that happened organically when you started following different interests? Do you see your current work as very different from your comics, or is there a natural progression for you—perhaps even a certain maturity? 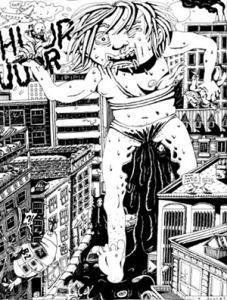 Julie Doucet: You did an accurate listing of what I’ve been doing the past 10 years! The only choice I made was to go back to printing. Which was my specialization at the university. Started with woodcuts and linocuts, then moved on to silkscreen printing. The rest was organic, like you say. Yes, there is a progression and a thread uniting all of it, the starting point being comics… It’s words into pictures, or words used in a visual form one way or another. Most of the time as a narrative. Some would insist that it is all so close to comics that I am obviously Still into it… but no, I sure don’t feel like that’s what I’m doing. I would say that what I’m doing is closer to poetry, if you have to put a word on it. I don’t really like the word poetry, but I think that’s what it is.

FBK: Your recent work has featured a lot of drawings of abstract geometric shapes. In some ways, I feel that this interest in perspective, shape and various shadings is a natural progression from your comics work, but it is also extremely different because it of course lacks a narrative element. Are you still interested in narrative at all?

JD: Yes, I am still interested in narrative. But in writing only, no pictures. 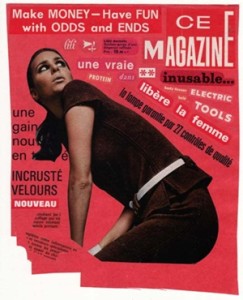 FBK: Most of your current work incorporates a lot of words, but not in traditional comics way. Instead you use phrases and words in isolation, and play with French, English and German. How important are words to you even in a non-narrative context? Do you think you could ever be a purely image-based artist?

JD: I quit comics 14 years ago! It is so far away from me now! I don’t even read comics anymore. Only the ones drawn by my friends and ok one exception: Anouk Ricard’s “Anna et Froga.” The words are the essence of my work… I did two series of portraits in woodcut in 1999-2000, that was the first thing I did after leaving comics. Although I liked the experience, I don’t think, no, that I could produce images without words. I kind of feel like that images are not… pertinent anymore. Too over-used. They have become meaningless to me. I love images, but couldn’t produce any anymore (figurative, at least).

FBK: What is it about collages that interest you? A lot of your raw material seems to be very ordinary stuff such as mainstream magazines and advertisements. Is there a political project of re-appropriation going on, or is it simply that you like the aesthetics?

JD: I like the aesthetics. Also it’s because there is a big variety of fonts in those old magazines and not too often put into pictures or photos, which makes them easier to cut out and use. It’s not the case for more recent magazines.

”I would say that what I’m doing is closer
to poetry, if you have to put a word on it.
I don’t really like the word poetry,
but I think that’s what it is.”

FBK: I am interested in your collaboration with Michel Gondry, the French filmmaker, for My New New York Diary. It seems throughout the project that you were being dragged out of your zone of comfort by Gondry, and I wonder if that was a conscious decision on your part—to do something that you were perhaps not entirely confortable with.

JD: I was very excited to work with Gondry, I loved his films and his crazy imagination. I trusted him… which was a mistake!! I really didn’t like the experience of being filmed and looked at by a dozen of people at a time, no. The whole thing was supposed to be an essais, not such a big project (18 minutes). He got more and more ideas for it along the way and dragged me into it. It is mostly his project, not mine. 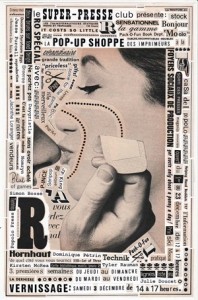 FBK: Your comics were published internationally, and reached a relatively large audience. There are probably many people outside of Montreal who are unaware that you are still making art. How do you feel about returning to hand-crafting art even if it reaches a much smaller and more local audience? Are you able to make a living? Do you see the mini-zines as something of a return to the earlier comics work and how you began your career?

JD: It’s more about the amazing pleasure of silkscreen printing. It is a total addiction. I create material just to be able to screen-print a book out of it. I don’t think it is so much the fact that I am hand-crafting my art but the fact that I am writing in French (or even worse in bad German) now. That leaves an awful lot of people out. I could always get something like real publications out of those small projects and exist for people outside of MTL and make some money, if I were writing in English. But it wouldn’t make sense to me to write in English, as it wouldn’t make sense to me to draw comics now. My work in French is appreciated, from people in visual arts as well as in literature (and in comics) that’s all I want. I make a living from this and that…

FBK: Your comics work has often been considered to have a bit of a feminist bent, an interpretation you have mostly resisted, preferring to not align yourself with a political agenda. I notice that some of your recent illustration work engages with specific feminist issues such as the various slutwalks, for example. You also seem to be preoccupied with images of the female body in many of your collages, and I wonder if you see your current work as political or even feminist in some sense?

JD: Because I am a woman and that I did the comics I did people tend to call me only when they have womens related topics to be illustrated. Which is very annoying, because I don’t get as much jobs because of that. I never had intentions of expressing anything political, it just happened that way. That’s the reason why from the beginning I never wanted to have that feminist label. In the late ’80s and beginning of ’90s it was not really sexy to call yourself a feminist… I got influenced by that. Today I would say OF COURSE I’m a feminist! I do put more intention in my work now. Feminist yes, sure, but political the word sounds a bit too strong to me. 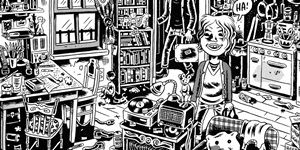 FBK: When you stopped making comics over ten years ago, you often talked about how the comics world was a boy’s club that never made you feel at ease or part of it. Since then, this has of course changed significantly, and there are now a great number of prominent and successful women cartoonists, many of whom cite you as an inspiration and part of the reason why they wanted to do comics in the first place. Does this change of affairs ever tempt you to create comics again, or are you completely happy to never do another comic ever again?

JD: I never said I never felt at ease in that boy’s crowd. I was very much at ease in the most part, me being more confortable with men than with women, at the time. I felt I was at the right place… it’s later that I started to not relate with those guys anymore. They were not much interested in anything else than comics and that killed me. NOOOOO I don’t want to draw comics anymore!!!… So many things to do!!

Frederik Byrn Køhlert is a Ph.D. candidate in the English Department at the University of Montreal. He is the author of several academic articles and encyclopedia entries on comics.