The demands of our personal salvations pose the challenge. Despite our commitment to making things or perhaps because of it, we are ill-equipped to accommodate the immediate occurrences of extreme discomfort and the sufferings they cause. The State and its affiliates, on the other hand, effectively utilize their riches and resources, and their experience in the business of making, toward the creation of an apparatus which can effectively be deployed toward the needs of their constituents, needs which they also articulate more persuasively, faster and better than the constituents.

No, not better, the best formulations come from outside The State but come out quiet in comparison and usually go unheard although, just now on a floor high up, I am hearing the 4 o’clock call to prayer.

The trajectories set forth by such constraints, of suffering and the bloated plots to do away with suffering, for indecipherable, multiply gendered bodies, does not differ structurally from that which has been set for colonized bodies brought into The State originally from afar. The only difference is the one which is most articulated and most silenced—that occasionally a star possessing brilliance enough to be able to operate all the cultural and class systems at once does come along and this star has the force to cause the whole thing (on its very own terms) to rumble, at least quiver. Such a rattling has at times produced an amnesty in which doors open and a few others of us are able to rush in, or out, but for most of us, there is an ever denser charge—an injunction to buy our way out of our predicament by signing onto an ideology the best of us oppose vehemently and toward which the worst of us are ambivalent. We are led to believe and we convince ourselves this point of purchase is some minor detail, that if we know we don’t mean what we say then it will not materialize although here we fidget more restlessly even than our usual, we shuffle where we stand, nervous, suspecting, nearly knowing what we already do—that speech and knowledge are convolutes and cannot be any other way, that words, spoken or written, make it matter—each one having some sort of impact if not ‘meaning’ so to speak, despite ambiguity, complexity, politesse, magic tricks, good humor and the weather. Black, White and Left, Right can each mean many things so we are warned to not define these things narrowly or generally, to be particularly conscious when using these apparently basic even banal words for wouldn’t we all agree, black is a word that means dark and white was a word that means light and that dark is understood to be under, feared like a basement or as a place to hide, like in a thick forest or a blanket, and light is received as a place of hope and exposure, levity and wisp.

Furthermore those narratives had been insisted upon by histories doubly violent first in their enactment again in their interminable retelling through which our limited knowledge of the emotions has been maintained.

We like to believe we can relax from all of it, The State, the histories, the enforced purchased means of survival, vigilance in language, and to trust those amongst whom we find ourselves, the warm, loving and bohemian neighbors that have moved in across the hall, and those with whom we share our work on (The Project). But, by shattering what illogical, inexplicable confidence we had, The Accident has made it even more impossible to know which way we walk or if we walk at all upon the earth below us or if there is in fact an earth or a below upon which we might now walk.

Rachel Levitsky, from The Story of My Accident is Ours, Futurepoem, 2013 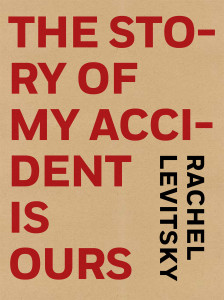 Rachel Levitsky is recently the author of a novel, The Story of My Accident is Ours (Futurepoem, 2013) as well as two other full-length books of poetry, Under the Sun (Futurepoem, 2003) NEIGHBOR (UDP, 2009) and a number of chapbooks including Renoemos (Delete, 2010). She was the founder of the feminist avant-garde network, Belladonna* which has now become Belladonna* Collaborative, of which she is now a part. In 2010 with Christian Hawkey, she started The Office of Recuperative Strategies (OoRS.net), a mobile research unit variously located in Amsterdam, Berlin, Boulder, Brooklyn (Gowanus, Crown Heights, Pratt Institute, Clinton Hill, Fort Greene, downtown), Cambridge/Woodberry Poetry Room, NYC (Holland Tunnel, Zuccotti/Liberty Park, Orchard Street), and the University of Leipzig in Leipzig. She lives in Brooklyn and teaches at Pratt Institute.