but to go there
the mind
endlessly
is singing
– Sappho

The poems we haven’t read
must be her fiercest:
imperfect, extreme.
– Jane Hirschfield

[These are not propositions, but several halves of several potential
metaphors.]

Like wind turns a strand of exhaled smoke
in a helical twist like a skipping rope, before it vanishes.

[A dialogue, in its call and response, would enact this explicitly.]

[Humpback whales suspend themselves upside down and perpendicular
to the direction of sea currents before they begin to sing.]

[If one considers our associative intuition of metaphors as a pre-linguistic
event of consciousness, one might be tempted to understand language
use as half-formed metaphors exchanged at the goodwill instant of their
gesturing across.]

[The is of a metaphor is an apology to silence.]

[At the moment we recognize someone is crying out of joy and not
sadness, the heart tacks.]

[During engaging discussions people will gesture with their hands, arms,
faces, in manners as unpredictable as the effect a brisk wind will have on
the flight path of a butterfly. Or in the way a sudden light source inflects
the vector of a moth.]

[So meaning doesn’t exist, as such, but rather occurs.]

[When someone we know well is alone we cannot know who they are.
They become unfinished metaphors (brought into relation with,
compared and contrasted to what?), whose meaning for us dwells in a
deferred state, as though adrift in another element.]

[A single honeybee will return to its hive and transmit the location of
the more rewarding foraging sites to thousands of other bees by way of
a ‘tremble,’ or ‘waggle,’ dance. The dance consists of runs and circular or
zigzag bodily movements; the direction of the runs indicates the relative
position of the sun to the foraging site, and the waggle’s duration is
correlated to the distance between the site and the hive.]

[It is said that up to 80 percent of meaning conveyed in a dialogue is
derived from facial expressions, posture and other physical gestures.]

[The more intimately we know a person, the fuller their silent gestures
become for our understanding of what they attempt to mean.]

[What do we mean when we speak of gestures? What does gesture mean?]

[ possibly possiblyyy possibly
the delicacy of her wrists, moving
as she spoke, unnerved me.]

[The writer’s attitude anything goes does not go far. It is a monologic
misunderstanding of language, to believe that using language necessarily
entails a relativistic insensibility rather than a resonant undecidability
that seeks to inform all aspects of apparently exclusive or contradictory
contexts.]

[It is to write with the presumption that one can never, and therefore
should never seek to, acquire wisdom through communication.]

[Which is not to say that there are no meaningless things, and that they
cannot be beautiful. Quite the contrary – take dancing, for example.]

[Like a metaphor, a gesture entertains the likelihood that it both is (moves
toward being) and is not (remains unfulfilled in its desire to be) the
objects of its attention.]

[However unintentional, conversational gestures are the body’s
inescapable brashness; its truth.]

[The human brain is like a Hadron Collider in miniature – language is
sets of discrete photons, the collisions are metaphors, and the debris,
splintering off as indiscrete waves and particles in incalculable directions,
is meaning.]

Like the god of the sea who beckons us in,
like those at their windows landlocked by the interim of hills.

[Lonesomeness, loneliness, aloneness: the distinctions and similarities
between them.]

[Incidents of fatal grey whale strandings proliferate due to mid-frequency
sonar pulses sent out in increasing numbers from U.S. military submarines
conducting drills in the Pacific. The latest mandate calls to further extend
the coastal range of these drills.]

[You cannot sustain an intimate discussion in absentia, be it a temporal
or spatial separation, as much as you may attempt to continually clarify
your intention across the divide.]

Like the six-frame drift of sound from an image that repudiates
wilful disbelief. Like value unsynced from the going rates.

[Our memory resists this impasse in its reimagined recollections, as does
writing, which, in its way, is a species of memory; the mind’s ability to
pause mid-current, cant across flow and sing to itself in another key.]

[Time flows over us. We pass through time. These are not simply symbolic
statements, though they are of a metaphoric order.]

Like the cabbie who takes a wrong turn innocently,
his hands constant on the wheel. Like a miller against his grain.

[Worker bees are inexplicably disappearing. Their colonies are collapsing
as a result. It’s been diagnosed as a syndrome arising from the combination
of extenuating ecological factors rather than as a singular pathogenic effect.]

[Being alone in a room together. Just that. There is wonder in mere
presence.]

[To describe an intimacy is personal, to undertake to gesture is intimate.]

Like the blossom of her youth so, too,
will my pain fade. Like memory’s chagrin at being left behind.

[Her jeans were covered in honey when she arrived at my apartment
that day. The jar she bought at the farmer’s market had broken over her
lap in the car. The look on her face, the swarm of her hands as she
explained herself, were eloquent and impressive as _____]

[A well-wrought metaphor that renews its tense each reading.]

[The sun, sifting through the gang of things seen; oceans of it for all
of us.]

I am afraid of articulate light, and the wind, and hands and
flowers that are necromantic in some countries. And the frown
of memory passing like wind sweeping the boughs, like wind
I am afraid of my soul. I am afraid for my soul caught
in the trees as the wind rises. Like the bleating noises
below the trees. Well after the moment an animal refuses
to struggle. It’s difficult to believe I am not eternal.

God, you look good. No, I haven’t grown.

– David Seymour (from For Display Purposes Only, Coach House, 2013) You can see the trailer for this book and read a conversation about it on an earlier post. You can hear him read this weekend in Montreal at Sparrow. 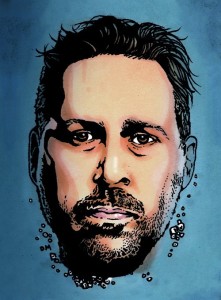 David Seymour’s first book, Inter Alia, was published by Brick Books in 2005. His second, For Display Purposes Only, was released this spring by Coach House Press. David currently lives in Toronto, where he works in the film industry.