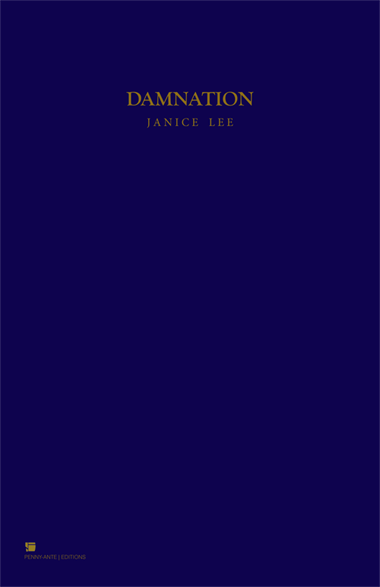 In scientist Nicholas Humphrey’s recent book Seeing Red he describes two forms of “the present,” both of which Janice Lee’s Damnation explore in a kind of breathtaking inversion. According to Humphrey, there are two conscious presents: the first is an infinite number of infinitely small “physical” presents in which nothing can happen because the instant is too brief, and then our more familiar lived “subjective” present, a kind of extension or bridge between past and future in which we perceive everything to take place and how we understand time.

The reason this is germane to Lee’s novel, a meditation on the “long take” in the films of auteur Bela Tarr, is that in the novel Janice flips the function of each present: as Lee’s collection of characters wait, and wait more, and linger, tightly wound in the subjective present, all the while everything can and does happen in a wild instant––a life changes, a village changes, the whole world transforms. This reversal is something beyond the engagement with Tarr that unifies the novel and is just one of many ways in which the novel recommends itself as a book not just to read (which you should), but to re-read, to linger on, linger in. A book to wait with and wait in.

Waiting is a central idea of the book, and in lieu of an apocalyptic plot hidden just outside of the characters’ reach, the characters waiting for something to happen, or for nothing to happen, becomes an urgent matter. Set in a timeless village in an unnamed country, only two things happen as they would in a traditional novel; the latter of these is something I won’t spoil but the first of which is that a bible arrives postmarked to no one in the village but seems to bring with it a kind of demonic power that makes children prophets, commands the weather, makes the animal world an ever-closer lingering menace, and stops the adults in the book absolutely cold, leaving them unable to do much but surround themselves with noise in a village drifting into a kind of stasis that builds in dimension and intensity until the book’s revelatory final moments.

And what we’re reading with the book is not the development of character––no one in the book even has a name––but rather different kinds and styles of waiting, of trying to wait, of being unable to do anything but. And in prose, Lee’s nod to the cinematic long take becomes menacing itself for the very reason that it takes place in prose and as such contains both a physical present (the time of reading the novel) and a subjective present (the architecture of time within the novel itself). And, for being as such more meditative than driven, the novel nonetheless compels us to want to know what will happen next, from page to page and in the world of the novel, because while we know there’s a “next” page to turn to, it becomes increasingly uncertain whether a “next” exists in the world of the book, and whether we even want to know, questions that become as urgent a matter for the characters and reader alike as any racing plot in a standard thriller.

And if the book, triumphantly individual in its ability to dwell without naming, has any close relatives in the world of literature it’s not in the work of Tarr’s screenwriter Laszlo Krasznahorkai but in the otherwise cheap thrill of a suspense/thriller genre novel, except all of the event of such a novel is either building up in Lee’s book, about to burst forth, or has already happened and can’t be articulated by the nameless, unheroic characters, much less understood and acted upon. Damnation is literally a book of just what the title names, but also a book of almost, a book of the in-between cleaving what might have happened from what might happen, a collective subjective present in which nothing can happen because all of the present is spent waiting for something to happen or recalling something that had happened, and the novel nearly has something of an almost occult ability to render waiting not a metaphysical crisis but an anxious, unsettling, and very real eternity, until that question, the question of whether something can happen, becomes more consuming than any clue in a genre thriller.

This is not to imply, though, that the book dwells in stasis or else simply performs in prose the “long take” of which the novel is partly a study; instead of long takes we’re presented with a montage of physical presents shared by some of the village-dwellers, some of whom make a forceful impression during a cameo appearance or else recur, as with “lovers” in name only who are themselves unsure whether they’re waiting for a springtime of their love either fading away or becoming real; both seem possible, even simultaneously possible in the supernatural collective stasis Lee places her characters in; as an unnamed Girl either reminds herself, commands herself or is told about halfway through the novel, “You must remain in the present.”  And Lee’s tightly lucid but never plain prose moves backward and forward within this command (or demand, or surrender) as characters watch but don’t act, and if something does happen it happens beyond the immediate purview of the characters and can only be recalled in hushed tones, as with the death of a girl (maybe the death of the Girl) later on in the novel, or the fear and bewilderment with which the villagers respond to the almost-happening, the endless rain, the passage of the possibly cursed Bible, the Word, from person to person.  At one point, in brief conversation, one character asks another, “What exactly are you afraid of?” and the only reply he can get is “I don’t know. Sometimes nothing. Sometimes everything. Sometimes just the dark.”  And, a little later, the center of the novel’s concerns in a simple exchange: “How long are we to wait?” “A little while longer.”

In at once both a breathtakingly austere and wondrously lurid novel of the endless now that comes before an unknowable future, Lee manages to not only offer her take on “the long take” but to surpass reference and craft a collective portrait of not-quite-damned but faceless and motionless villagers caught in both the fear and the thrall of being unable or unwilling to break their current “nothing” with a future of a “something” that, as the novel proceeds, you understand as the characters suspect can be nothing other than terrifying beyond naming, an end and beginning, a future from which no one can escape no matter how much they (and we) try to wait.

Nicholas Grider is an artist and writer; his first book, the story collection Misadventure, will be published by A Strange Object in February 2014, and his work has appeared in Conjunctions, The Collagist, Caketrain and elsewhere.