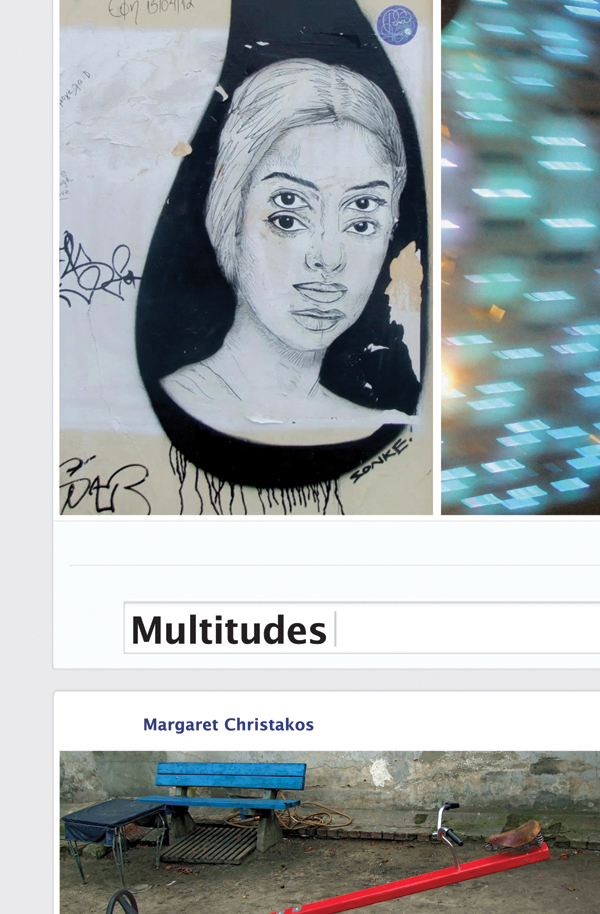 gnash words into coming, into body.

load coming into each.

is it the threshold of coming or

the deep thrash of asking?

Like Christakos’s other work, Multitudes is sexy, excessive, slyly ironic, shifting, maternal, quotidian, joyous, lyric yet procedural. What is lyric in a Christakos poem is the line, which is perceptive and crafted in terms of its sound and sense. But Christakos displaces her line: she picks it up, flexes it, flips it, sets it down again, pressing it between other plied lines. These accretions build (or even disperse) already multiple meanings but just as interestingly, they double one’s attention, rippling the temporality of reading. The repetitions extend the book along another axis. They remind us that time is a dimension.

Multitudes is Christakos’ ninth book. In it, the permutations occur on the level of the line as in earlier works,[1] but they are also developed along the letteral level of the word. Multitudes: Deilmsttuu: Sedutitlum. (That is, As is: Alphabetical: Reversed). These permuted words creep into the book, so one gradually learns what’s happening, can strategize how to read what initially appears to be not a word. As a linguistic manipulation, it’s less contrived and less fixed than an anagram, at once more opaque and more open to reading variants. Sedutitlum looks as though it could be a word, perhaps Latin: a form of or origin for the sedulity of reading, or perhaps its seduction, in its intimate connection of multitudes.

To talk about this device, we could begin with the body and electricity. Take the synapse-bursting opening poem, “Threshold,” with its Whitman epigraph: “sing th body electric.” The body here is electrified and electrifies; its “threshold” is a necessary magnitude of charge, but it’s also and especially that opening between language and flesh, skeleton, tendon:

do those words form a column or spiral?

do those words coalesce as body

into the body they conjure?

do those words form a tongue or jetty?

is a probe formed that touches

the tongue it entangles?

do I cock my head sideways

peer along tubal promontories and

at this occult angle drench

The body forms words;[2] do words form the body?

Not merely electrified, the body is an electric structure composed of neurons and sodium potassium gradients and pumps. Like other electric structures it can short-circuit, and re-circuit. Explaining her mother’s post-stroke paraphasia, Christakos notes that “her speech became inextricably tousled and extrapresent and erased at the same moment. in many cases there were transposed and substituted phonemes, but also an utterly unconstrained plethora of baffled pattern—it seemed to be entirely aleatory. and yet the brain is doing something, imposing some system of recasting what is being intended and what is being produced” (115).

Hence Christakos’ use of this device (a word which etymologically derives from both divide and desire), that recasts intention and releases it: “different / deeffinrt /tnereffid” (“Belonging” 22). When the trained eye discerns the intended word, other possibilities still ghost it, sometimes poignantly: when givers appears backwards, srevig suggests first serving (101). Or,

ago n how could it have neeb

so many weeks. Is time real. Is

Time is skeewed, the present perfect of have been evokes a need, if dyslexically, mourning a last day stalls time, busy hints at sub(mission) to its exacting math.

This wordplay changes reading time, slows it down, and in slowing it, draws out the corporeality of reading: “That is th case 4 / th thrae itself with its gnitautculf / attractions” (100). Our eyes are lately trained to scan feeds and this text won’t let us; like good poems do, this one makes us stop. This slowness creates a productive tension with the instant and fleeting (indeed, also fluctuating) digital content that the book sources—note the shorthand 4. The flickering doubling-back over words is almost evoked by the double eyes on the cover, a photo of a spray-painted woman’s face with two sets of eyes one above the other.[3] Digital temporality but also connectivity is at play: the multitudes are the mass of people, the populace, in a contemporary context, the social networks. Christakos extracts and manipulates the specific language of facebook and twitter, but deftly recombines this text with all her usual humour and tenderness.

Be alone LOL. When online

Here’s the lament [status update] of the afternoon:

Across arteries clogged with traffic I

From this chiding humour to the often jarring juxtapositions (“Coffee!”) produced by news, twitter or facebook feeds, Christakos exposes some of the absurdities of online communication. But she neither uncritically celebrates this language nor makes apocalyptic pronouncements about it. She does implicitly ask something about the information and confessions the social networks elicit (“when online / nominate yourself”), and posits strange and lovely interventions[4]:

the force of even breezes

that I want to gather for a few syllables […]

There’s a lot more to say about this book and only a few moments in which to write. So, the moment. Christakos extends the instantaneous but also works productively with it, the “moment for a moment there is moment” called “inspired.” The bp nichol-esque linguistic epiphany: “buyological imperative,” “vocaholic,” “syllabia,” “wrioting.” The humour and poignancy characteristic of this sort of word play is also in the book’s “songs,” even if, in name, they’re more evocative of Whitman (and so long-windedness). “Love Song” reading only  “in u / i nu”: In you, I knew or In you, I, “nu,” like French for nude (this is intimacy: in you I knew/nude). You and I open the next poem, “Partition Song”: “nous / no us” partitioning the French “we”, nous, [5] so that there is “no us.” The last song moves from us to the moment, with the feminine remainder: “no we / now e” (“Substitution Song”). The Multitudes extends from privacy to intimacy to complicity and multiplicity and its gendered scissions (“nous” normally erases the feminine e). A multitude offers the exhilaration of unison as well as its erasures; the permutations of anonymous and unanimous are the rhymes on which the book ends (120-121).

Bronwyn Haslam reads, translates and sells bikes in Montreal, where she has mostly completed an MA thesis.

[2] See also “Seesaw ng,” a score that shifts between “meaning” and “moaning,” the body signifies aurally but seesaws between linguistic and nonlinguistic modes.

[3] The woman graffitied in black and white resembles Emily Dickinson, somewhat sultrified, but with identifiably severe hair and the familiar pose of the best-known photograph of her. There’s more to say about the lyric in this book: Christakos works with online confessions, Whitman’s “Song of Myself,” writes “No lyric no cry” and quotes productively “Anne Carson’s bitchin ‘The Gender of Sound’ essay” (106), and as these last two suggest, there’s something more to be said about what the book says about the intersection of lyric and gender.

[4] The explanation of how her mother’s stroke initiated her meditation on mind and language, quoted in part above, comes from a chat log with “Moribund Facekvetch” (aka Gary Barwin). The book shows complicity with the intimate possibilities of the internet, while also rubbing the sores of the oddly public isolation online communication can afford. “facebook is a little timelapse fast lap from the poetics of direct confessional lyric […] a negotiation with the audience/public/commons as both known and anonymous” (120).

[5] For precision’s sake, nous could be we or us; for the first person plural in French, the pronoun is the same whether the case is subjective or objective.