They say Your skin is blue because You are infinite like the sky and the ocean of milk You rest on. I wish my skin was blue.

So begins the piece entitled “Dear Vishnu” in Vivek Shraya’s playful and intimate collection of prose poem-like stories, God Loves Hair (Arsenal Pulp Press, 2014). Among brief flashes of text intermingled with stylized graphics by Juliana Neufeld, a world of anxiety, longing, estrangement and hilarity is built. As a reader, you are invited into the home of a young child, led through his puberty, into his teenage years, and made an observer of achingly relatable moments in his life.

The narrator grapples with his sexuality in an environment where anything related to  “es ee ex” (43) is taboo, where fathers caution sons to avoid girls because they are dangerous, where a friction exists between wanting to read Nancy Drew books and having to appreciate the L.A. Lakers (48). A dichotomy is presented between a boy begging to play the female parts in the school play and wishing to dye his hair red like his friend’s, while also spending every Sunday praying at the temple.

You watch as the boy slyly suggests his aunts dress him up in a sari to “see what [he] would look like as a girl […]” and thinks, “I am the prettiest little girl in the world” (25). You watch as he learns to walk quickly through the women’s underwear section at Walmart with his head down, whispering Sai Ram to avoid potential sin. You watch as he squirms through sex ed. and rants about the horrors of showing kids how to put on condoms. You watch as he apologizes his way through being bullied, looks up his gym teacher’s shorts, trims his mustache for the first time, sings bhajans at the temple, and plucks his eyebrows with his mother’s tweezers:

When my mom tires of me constantly borrowing hers, we head down to Zellers […] She splurges on the fancy gold-plated ones. She hands them to me in the parking lot. Thanks, Mom. This passing of the torch has to be a sign. A sign that she knows my secret and loves me just the same. 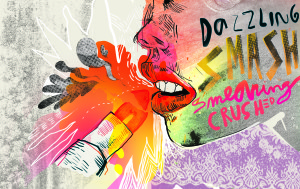 The intimate curiosities of the young narrator are revealed in “Lipstick” (19), a deeply personal description of a child blinded by the colors of lipstick in his mother and aunt’s makeup collections, comparing them to tools used for art –his face a canvas, the lipstick his oil paint. His inquisitiveness, and the repercussions that follow, gesture towards his struggle for an outward identity that is both socially acceptable and yet coherent to an inner perception of self. The dominant social norms render being queer and being Hindu as problematic, and since the public sphere is crucial to Hindu life, the text asks, how can our protagonist reconcile these selves? How does anyone? There is a tension between falling off the grid, not belonging anymore, and staying truthful to one’s self.

“Who does God love?” As a Hindu boy coming to terms with his sexuality through devotion and religion, he questions his own worth constantly—most prominently through God’s eyes:

The strength of this collection lies not in asking you to feel pity, sympathy, love, anger, revulsion, sadness, or a familiar nostalgia, but rather it lies in an easy trust that readers will be able to return to a place of childhood learning, a place of disappointment and loss, discovery and revelation—a place filled with the minute details of growing up painfully, little by little, and then suddenly, all at once.

Bukem Reitmayer is currently completing an Honours degree at Concordia University in English & Creative Writing. She is an assistant at Lemon Hound.