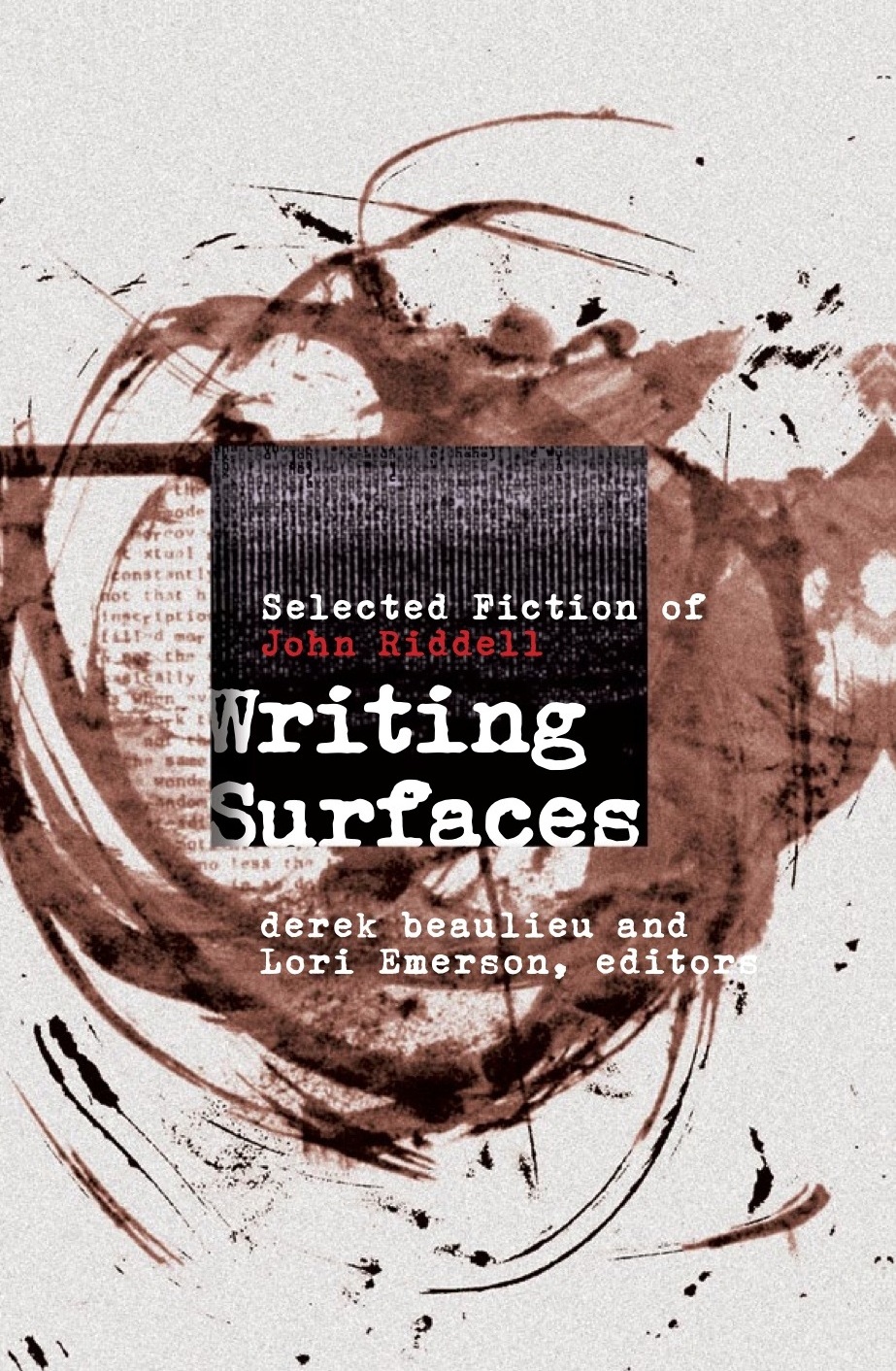 Writing Surfaces: The Selected Fiction of John Riddell (Wilfred Laurier UP, 2013) is an overdue and timely re-introduction of one of Canada’s most radical, enigmatic media experimenters and fictioneers. Riddell’s concretistic, playful, unreadable, procedural, and non-representational works are numerous and have been too often overlooked. Beginning his career in the early 1960s, his work appeared in some of Canada’s most engaging mid-twentieth century magazines including GrOnk, Rampike, Descant, and the now defunct Open Letter. His own services to Toronto’s avant-garde communities were equally foundational; Riddell served as an early contributing editor to Ganglia and co-founded “Phenomenon Press and Kontakte magazine with Richard Truhlar (1976)” (1). Eventually, Riddell and his work virtually disappeared. Lori Emerson and derek beaulieu have done us a great service in editing and re-presenting a compelling selection of Riddell’s work which has been too scarcely available.

This necessary volume offers a comprehensive selection of Riddell’s diverse array of meta-media writing strategies. Emerson and beaulieu’s selection spans from his better-known lipogrammatic comic “Pope Leo: El Elope” (illustrated by bpNichol) that recounts the tragic murder of Pope Leo using only four letters (P, O, E, L) to the dirty, concretistic “a deux,” a work composed of typewritten text that is disrupted by smears, hand drawn lines, and inkblots. Much of the work presented here explores Riddell’s interest in the relationship between machines and language–he creatively intervenes with the functions of the typewriter, photocopier, and paper shredder, among other technologies. Riddell’s work poses a special challenge to editors because much of it is unreproducible–much of it relies on aleatoric operations and at other times precise and irreproducible gestures. Considering both editors’ outstanding backgrounds exploring radical, media-related literature, there may be no one better to trust with this work.

The selection arrives during a renewed interest in the tradition of visual and concrete poetries as evidenced by recently published anthologies The Dark Would (ed. Philip Davenport), The Last Vispo Anthology, 1988-2008 (ed. Crag Hill & Nico Vassilakis), and A Global Visuage (ed. Jörg Piringer & Günter Vallaster). Writing Surfaces not only reintroduces a contemporary audience to the engaging materialist experiments of John Riddell, but also highlights the contributions made by one of Canada’s pioneering poets to the history of visual and concrete poetries.

Eric Schmaltz is a writer, reviewer, curator, and editor. His work has appeared in various places online and in print including Open Letter, Rampike, Poetry is Dead, dead g(end)er, filling station, and ditch. His first chapbook MITSUMI ELEC. CO. LTD.: keyboard poems was published by above/ground press in winter 2014. Eric lives in Toronto where he co-curates the AvantGarden reading series.