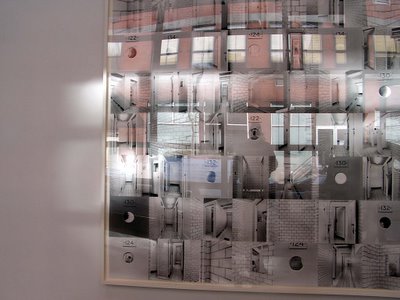 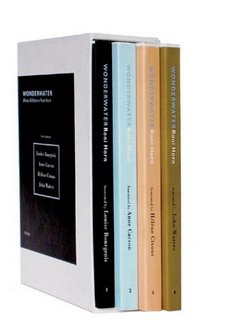 Chelsea was a ghost town, nary a dog in sight. There was one gallery, Matthew Marks, that I knew I had to catch, so it was the one I called, and yes, they said, they were open until 3. So off I went. As luck would have it (or not depending on one’s perspective), it was the only gallery open in Chelsea…at least the only one I found.

The first image you encounter when walking into the gallery is Her, Her, Her and Her, which I found absolutely stunning. Evocative, disturbing, playful and compelling the shot is a series of entries in that most intimate and public places–the bathroom. The white tile– shiny, sterile and compact–and the gaps in which parts of the self are caught make for powerful contrasts, particuarly given the black and white and the apparent repiitions.

Images of Isabelle Huppert are also very compelling, as are the huge molds, my favourite being one titled “Aretha”. However, the Wonderwater: Off Shore books shown on the left, were the real find. Amazing project which I walked out of the gallery with and fully intend to count it as “present to self”. One of the best shows of the year for me, and well worth the lonely trek to Chelsea. More on the books in the weeks to come.