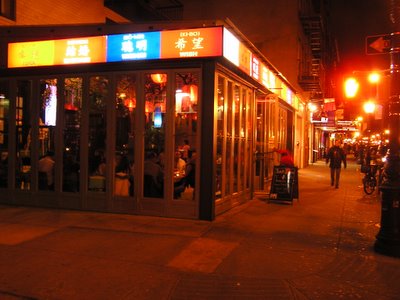 As posted last week, I heard Jen Benka read at “Battle Hill”, the Brooklyn Reading Series located on Smith Street, at Bar Below–a bar in the basement of the restaurant above. She read with John S. Hall, another Soft Skull writer, and Cooly-Cat with his little Jazz-Man chapeau and uber-slick anti-Bush riffs. His cool vibes were pumped up, and with a title like Jesus Was Way Cool, which after all, is way cool, there’s just no missing the point. The fact that some of Jesus Was Way Cool was written in Toronto made it that much cooler.

And it was interesting to see two different approaches to the political poem, though Benka largely read new work and not from a box of longing with fifty drawers, published by Softskull this fall. More on Benka to come, but I wanted to meditate on the divide in the poetry world. We hear all the time about a divide between language and formal poets, but I want to argue that there is a more intense, more subtle divide than that, one more difficult to articulate, but I sense it’s more a divide of the humorous, or the uber “hip” and the earnest. The earnest being somehow less fashionable than the “protest as requisite mating call contained within a pre-dinner preamble.” Can we thank Billy Collins for this? Or Paul Muldoon? I bring up Muldoon because flipping through his selection for the Best American Poetry this year makes one think that we’re in a golden era of oozey kind of glory days…many of the poems are great individually, but all together like that it’s like eating too much cotton candy and then going on the Cyclone, something is coming up.

I don’t think Whitman was coiffing himself for the masses, nor I suspect was Ginsberg, and that’s part of what made them “way cool”. I think they really just meant the poetry. I get that sense from Benka. Here’s a teaser from her “poetic deconstruction of America” through one of its essential documents, the Preamble to the US Constitution. Benka gives us one poem for each word in that Preamble and I give you “United,” “Justice” and “America.”

to stand alone together

one theory suggests
that all theories
in their translation to practice
rely on innocent people
to pay the price for progress.

escape and the delusion of discovery:
across the mad ocean to the rocky shore
step foot onto land call it yours.

a box of longing
with fifty drawers.