“…she is very capricious; one cannot summon or foresee her; she comes as happiness comes, hands filled with an achievement that is already in flower.”

K. Silem Mohammad is currently at work on Sonnagrams, a collection of poems in which the poet translates Shakespeare’s sonnets, line by line, into anagrams. The procedure goes something like this: the poet plugs a line of Shakespeare’s verse into an online anagram generator, the results of which serve as a sort of smorgasbord of poetic possibilities from which the poet sculpts a new line—and another and another until the poet has built a new sonnet. In this case, the new poem is complicated by an adherence to the metrical structure of the original sonnet (tricky!), although, admittedly, the poet is willing to break the rules, as it were, and drop a letter down a line or two for the sake of sense. The resultant poems look like this:

Overwhelm the Hot Depth of the Hush Muff

Unwholesome leather flagpoles gross me out;
I never may endure their bulging mass.
Abjection hatches random nests of doubt
When I am reading Newsweek in the grass.

Intense coyotes way hopped up on meth
(Mere formalists by virtue of their hats)
Cannot but shudder at the thought of death,
Although they dwell at Watergate with rats.

Those photogenic walruses are still
Unfocused in their smooth immunity
To styrofoam protrusions of the will,
And oft enough outwitted by a bee.

Are London bedbugs thought to be that tall,
That Mammoth Jack must huff to drub them all?

[Sonnet 44 (“If the dull substance of my flesh were thought”)]

It’s a task suited to poets with a penchant for meter and patterns and puzzles and it’s the sort of task that could probably drive a person crazy. I can relate. A few years ago I translated T.S. Eliot’s The Waste Land, as well as a number of other canonized poems, in a similar manner. So, for the sake of comparison, for the sake of spookiness—here’s my version of Milton’s “On His Blindness” from my first book of poetry, Curio (BookThug, 2005).

She Is Blond Sin

Dim, nephritic, yet single (whoosh!)
She’s a dandy kid.Why film her drear wilt and
Tease the wanton hidden clit?Oh had I that
Molten loadstone rebel—gum my thighs.She is down
To her panties.Revere her knees.Tada my
Darling!In time he ruts her cunt.My curt
Deus ex machina goads both girl and Delt.Today
Only I partake in neither—devout—but
Soon that rumour (not greed) plies me.Don’t
Fight.She’s a Norse beast.Now I stroke her.
Baby my every limb seeks this state…hide, eh?His
Deep kiss taunts singly.Ding!Had I shod a bi
Dancer (post Streisand) taut and low—oh
Woo!What a dish!And to yell nasty verse!

(John Milton, “On His Blindness”)

This was the first poem I ever “anagrammed” and after writing it I felt as though I’d reached into Milton’s grave and poked the poor guy in the eye. It felt so irreverent, so freed. Which is, of course, why I continued to longer procedural projects. But the job was arduous. At the time, the Internet wasn’t so speedy as it is now, so I did it all by hand. I tried to maintain as close a mimetic structure to the original poems as possible, and I was firm with myself; I wasn’t allowed to carry letters on to following lines. After all, if a computer could come up with 500 alternatives for “April is the cruelest month, breeding” then surely I could come up with one. But no matter what nuances of craft there are between Mohammad’s procedure and mine, it’s the similarity of the end result that strikes me as simply wonderful.

Why wonderful? Because it’s as if we are two scientists who have chosen to conduct the same experiment, unbeknownst to one another, and have arrived at similar results. In a way, this proves the procedure is sound; that a sense of fun, diligence, and irreverence can lead to some formally interesting work. And I don’t use the word work lightly. The types of constraint-based poems Mohammad is invested in here are hard, hard work, not to mention there’s something reassuringly plebian about the end product. Anyone with the inclination can write these kinds of poems and come up with similar results. There’s nothing rarified about them and, so long as you are willing to leave your performer’s look-at-me-desire-for-recognition-of-virtuosity at the door, the poems require a poet abandon persona and allow procedure to take centre stage.

The sonnagram feels full of intriguing possibilities to me right now, as it is poised at an interestingly liminal point between traditionally formal and experimentally procedural conceptions of constraint. The elements of “chance” and “intentionality” (in Jackson Mac Low’s sense of the words) are balanced, or held in tension with each other, so that the act of composition simultaneously involves a submission on my part to the felicities of the arbitrary linguistic draw, and an indulgence in a more traditional version of “craft.”

I’m quite happy to take this statement further and say I don’t see much difference at all between traditional forms of constraint-based writing and emergent traditions. Craft is craft is craft. Poets writing today have a particularly large pool from which to draw the elements of their work, and I think they write best who draw deep and draw often. Do I think projects like K. Silem Mohammad’s Sonnagrams will remain as Shakespeare’s sonnets have remained? Somehow, I doubt it. But perhaps that’s part of the charm of the anagram. They’re slippery. They want to mutate. Just when you think you’ve got one nailed to the page, it turns on you and slips away.
-Elizabeth BachinsKy, Vancouver 2008

Elizabeth Bachinsky is the author of Curio and Home of Sudden Service, which was nominated for a Governor General’s Award for Poetry in 2006. Her third book of poetry is forthcoming with Nightwood Editions, Spring 2009. She lives in Vancouver. 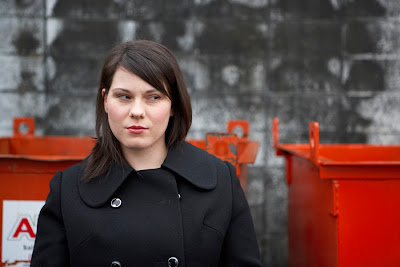