When it is finally ours, this freedom, this liberty, this beautiful
and terrible thing, needful to man as air,
usable as earth; when it belongs at last to all,
when it is truly instinct, brain matter, diastole, systole,
reflex action; when it is finally won; when it is more
than the gaudy mumbo jumbo of politicians:
this man, this Douglass, this former slave, this Negro
beaten to his knees, exiled, visioning a world
where none is lonely, none hunted, alien,
this man, superb in love and logic, this man
shall be remembered. Oh, not with statues’ rhetoric,
not with legends and poems and wreaths of bronze alone,
but with the lives grown out of his life, the lives
fleshing his dream of the beautiful, needful thing.

As of now, I am a mere forty-eight hours returned from the young and energetic democracy of South Africa – Johannesburg, Durban, and Cape Town – where I met many, many poets and lovers of poetry and as many, if not more, lovers of freedom. Our last night on stage (we did one performance in each city), I bid farewell to South Africa with Robert Hayden’s “Frederick Douglass”.

When I read this poem for the first time fifteen years ago, it moved me immediately, and for many reasons, one of which is that I could hear a version of it in the air even before I’d read it aloud. The poem, as compact as it is, has the qualities of the bardic, its repetitions and its catalogues of epithets and appositives.

It’s one of the few poems I have memorized, one that I recite to myself in the subway or on line at the bank. Once, I was stalled in the basement of the MiddlesexCounty courthouse waiting to be called up for jury duty. When we were directed to wait in a second chamber upstairs, the bailiffs made it clear we had to leave everything behind – bags, books, notebooks, pens. All I had was this poem in my head, reciting it over and over silently among strangers in a courthouse in New Jersey.

With no apologies to strict formalists, “Frederick Douglass” is a sonnet. What better vehicle to address the notion of freedom than a form with a long tradition of austerity. Look how the first line blatantly violates the ordinances of a conventional sonnet – 18 syllables, nearly double that of the strict iambic pentameter line. It bursts out, breaks through the imagined right margin – and not with iambs, but with a predominantly anapestic feel. Not the stately march of ‘unstress-stress’ or one’s resting heartbeat, but the rhythm of running.

Hayden dismantles other formal strictures: there is no end rhyme and, more subtly, there is no real discernible turn. Through rhetoric and syntax the poem drives itself from left to right and down the page with a ferocious pace, trades volta for voltage. This is not to say that Hayden recruits only a full-on acceleration. There are graceful syntactical maneuvers here. The visual and rhythmic isolation of “exiled” in medial position and “alien” in terminal position is impeccable, the latter, on the verge of white space, silence, vanishing. These moments, framed by commas, are beautifully timed, i.e. they are natural to the breath, urgency, and energy of the poem.

I do want to mention the choice of the word “needful”, which feels musically precise (when we consider the obvious but clunkier alternative, “necessary”). It’s not a word we use much in American vernaculars. For a poem that is about the wish for freedom to be common, the word choice seems to rarify, rather than familiarize, the diction. We have to remember the idealist side to Hayden’s assessment of himself as a “romantic realist”. For Hayden, political, spiritual and personal transcendence is a movement upward. Note the title poem of his collection Angle of Ascent (a tribute to Gabriel García Márquez); note also “The Diver”, whom Hayden portrays as witness to the horrors of the deep, “began the measured rise.” I think, too, that Hayden resists “necessary”, the Latinate word, in favor of“needful” which has Proto-Indo-European roots. The Latin has strong associations to empire, but more importantly the word “necessary” is built with the negating prefix “ne” or “not”, where “needful” ends with an explicit fullness, a brilliant and appropriate paradox – to be full of need.

I also want to point out a particular line that offers several performance options: “this man, superb in love and logic, this man”. In length, it is much closer to a traditional pentameter line. One might even consider it predominantly iambic.However, much more can be emphasized in the line’s contour. First, its construction is stunning; “this man” is what holds the line together on either end. It is an embrace – “this man”. Also, the pronoun “this”, which appears repeatedly throughout, insists that the poem is not an elegy, but a celebration of what is alive right now. It is not nostalgia or some far-flung history; it — freedom, liberty — is present in this very moment and Hayden wishes it to be alive in our very blood and muscle: “diastole, systole,/reflex action.” For this, I say the line is almost entirely spondaic. In performance, one might even stress the word “and” in which case there are only two unstressed syllables in the whole of the eleven-syllable line—“superb in love and logic”. In Western society, one has been riven from the other. For Frederick Douglass, love and logic, dream and reason, are fused together again. (To quote one of my own contemporaries, Steve Scafidi, and is a “little Jesus”.)

In such critical times as we find ourselves now, I’m comforted and emboldened by this poem. I like to think there is not a corner of this nation (or perhaps the planet) that could not benefit from such a marriage of wisdom and rhythm as Hayden has composed here. Admittedly, I am still haunted by Soweto, KwaMaShu, District 6, MitchellPlains … Selma, Watts, CrownHeights. What is it that hobbles us in our post-segregation/post-apartheid era? We have a tendency to give notice and adulation to poems for how perfectly they are made and ignore how clearly they must see. A great poem has to behold all that is gorgeous and terrible in what has come before us, in what lies within us, and in what our leaders have imagined or failed to imagine for us. In our work toward freedom, the poem alone, even Hayden admits, will fail us (as will monuments and myths), but a poem, like this one, can be the vehicle through which we finally arrive at “fleshing his dream of the beautiful, needful thing.” 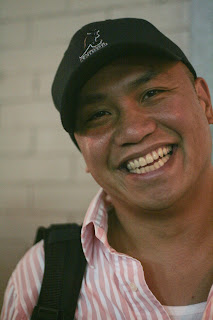 Patrick Rosal is the author of My American Kundiman, winner of the Association of Asian American Studies Book Award and the Global Filipino Award. His first book, Uprock Headspin Scramble and Dive won the Members’ Choice Award, from the Asian American Writers’ Workshop. His poems and essays have been published widely in journals and anthologies, including Indiana Review, Harvard Review, Ninth Letter, Brevity, and Language for a New Century. He has been a visiting writer at Penn State Altoona, CentreCollege, and University of Texas, Austin, and has just returned from touring South Africa with the Urban Voices International Poetry Festival.