with a special glove
fits real life to a private message
the abominable pixels
that help people with snow.

a lifetime watch battery for allowance
encyclopedia soda,
name and profession,
I should be mimicking things
context is vinyl
I am, but that’s not me.

refill packs drive home all night,
sneezing and snorting into everyone’s self.
still at work, I eat bunnies and rainbows for breakfast
real estate on the wall of harping on it,
not because I don’t have freedom
what I have is a quick run around with the Hoover.

the thing about me
is that I enjoy personal experience
I don’t know where the nearest video shop is,
and for some reason
I can never bring myself to drink on my own blood.
I like sunlight.
analyze it for me.

For the last oh let’s arbitrarily say forty years the main way art has earned the right not to be destroyed by the so-called real world is to a) annex some previously anesthetic territory or b) engage in whatever pendulous dialectic is happening in the art world in such a fantastic and vulgar way that admirers of sheer nerve everywhere take note. In his role as a chief engineer of flarf, Gardner has been viewed as precisely the kind of militarist any definition of avant-garde would imply. But as “Fixing a Real Phantom Limb” demonstrates, Gardner is a cuddler, not a punisher.

Wide reading in the key psychology texts of the last midcentury — Karen Horney, D.W. Winnicott, S.J. Perelman — informs Gardner’s therapeutic approach to the lyric. An empath, he is acutely aware of pain and ignorance as motivating factors in your basic everyday human foibles. He begins the poem by segueing directly from the title — is the traditional opening of the poem the lack Gardner is mediating here? In any case, the tone is simultaneously disorienting and reassuring. The scenario in which pixels “help people with snow” is specious yet plausible, just as the contrast between real life and a private message points out a chasm that, whether or not it really exists, slows the reader down a moment.

These microdistortions will be familiar to anyone with more than passing exposure to John Ashbery’s work, and Gardner did study with the master. But he is not merely borrowing Captain America’s costume here. Where the traditional Ashberyan folkdance inevitably dislocates the reader’s attention, Gardner recalibrates it, returning again and again to the not-quite-legible activities observations and aversions of a stable first person, albeit one who eats bunnies and rainbows, performs menial tasks, ventriloquizes hippies.

This eternal return is prompted by the sense of responsibility and obligation that leaks out of the poem in places. Horney has written extensively of the trauma the ego sustains in the face of unreasonable expectations which it experiences as “shoulds.” “I should be mimicking things,” Gardner writes, letting us know he both knows the rules and knows how to cooperate with and subvert them. As a moment in a poem it’s probably a little over-compressed, nevertheless I take “context is vinyl” to be an affirmation of the old-school premodernist value of explaining what one is talking about and why, just as audiophiles have come out swinging for predigital recording techniques. Gardner affirms his alliance with the folkways — “I am” — even as the poem’s speaker asserts an independence from purism and programmatic behavior — “but that’s not me.”

We hear more about this underused “I,” this so-called “me” and their dialogue with the lyric a few lines later. Where the poet is expected to provide an engaging first-person experience, Gardner’s speaker admits to liking that kind of thing — the experience, that is, not providing the depiction. As conscientious objection goes, it’s cheerful, fannish even. Gardner even comes close to ending the poem with the standard American poetry move of shifting to a natural phenomenon, such as the beauty of light. But where that tactic is ordinarily deployed in hopes of simulating a feeling of sublimity, of submerging the reader into the writer’s mastery of the grandiose, Gardner instead offers to share the experience, appealing to the reader to come closer, to tell the speaker, the poet, what it’s like.

I don’t know what “encyclopedia soda” is, what “refill packs” are. I too am unaware, now that Blockbuster has imploded never mind Kim’s, of the location of the nearest video place — unless we can count Netflix or hulu.com? And I am baffled what the Missy Elliot prepositional phrase “drink on” is doing next to my own blood. But I recognize the feeling of wanting to recycle all this trash into something functional, to harness ambient confusion and hostility as the energy sources of the future. More importantly, these strange phrases make me smile more and more as the poem goes on. They do not have that old-poem smell. They are not ugly. They surprise me. They indicate that art may be happening. It is.

“Fixing a Real Phantom Limb” appears in the eighth issue of The Hat, which I co-edit with Chris Edgar, and which is arriving in December. You can preorder a copy at http://hatpoetry.com/. 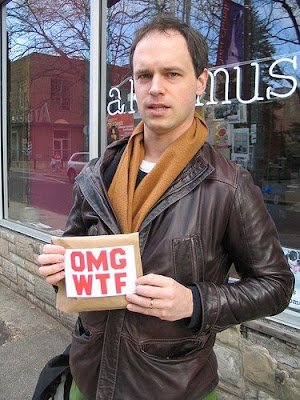 Jordan Davis was born in New York City, where he lives and works. He has written about poetry on-line for such audience-estuaries as UBPoetics, Subpoetics, Subsubpoetics, PaperMag.com, Nytoday.com, Equanimity, Constant Critic, and Slate. More information about Jordan Davis is available on the internet: http://www.jordandavis.com/
Photo by Alison Stine Davis.