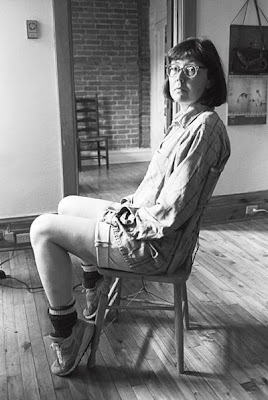 By Laura Huzzy
The line at the box office made it look like it’d sell out. It was strange to see such a well-attended poetry reading, not that I’d never seen one before. Just ten months prior, also at NYU’s Skirball Center (which sounds like a stadium, but with its 877 seats is only a stadium in poetry reading proportions), I saw a packed performance of String Talks, a reading of Carson’s Short Talks accompanied by dancers. One of the dancers unraveled and rewound a skein of red string, stretching it about the stage, using bricks or Carson, herself, as anchors. I was late and only caught the last ten minutes, but I found that I really enjoyed going to a poetry reading where there was something else to look at. I left wanting more.

Stacks was a collaboration between Carson, who read new work; Jonah Bokaer, who choreographed; and Peter Cole, whose adaptive sculpture consisted of a wall of cardboard boxes on the stage. While Carson read, the dancers rearranged the sculpture, toppling, relocating and restacking its elements. Even Carson’s unconventional podium, a shorter stack of boxes, was not exempt from the kinetic meddling to which the rest of the sculpture was subject. Carson, serene in her role as Reader, followed her podium across the stage and back several times. Otherwise unaffected by the theatrical setting, her performance was conspicuously conventional. Her voice, steady, sober, soothing, probably wouldn’t have sounded differently in a coffee shop or conference room. She did, however, seem to have dressed for the event. With her hair pulled back, reading glasses at the end of her nose, and stark white button-down + oversized blazer, her look fell somewhere between groom and librarian. I was curious to see how she would top the red cowboy boots she wore for String Talks and was not disappointed. The dancers’ relationships with the sculpture varied from boxes as dance partners to boxes as objects of offense that dancers would sometimes slap or kick across the stage. Boxes smacking the stage sometimes made Carson’s words inaudible. It brought to mind Mairéad Byrne’s Some Differences Between Poetry and Stand-up: “Stand-ups know what a mike is; stand-ups come onstage and grab that mother; stand-ups pace back & forth with that mike, then at the end of their act they fire it down or whoosh it in the air and fire it down: that’s what Chris Rock does: he fires it down.” That’s what the dancers did. They fired those boxes down, demanding your attention but at the same time echoing the words or movement in the poem. What a welcomed distraction.

I have never seen Anne Carson read without dancers, but I’ve seen enough poetry readings, in general, to know that I am likely to get distracted no matter how interesting, thought provoking, etc. the poetry might be. Carson is not Rock. Poetry is not stand-up, but an interdisciplinary and collaborative approach to poetry performance such as this one adds a theatrical and engaging quality uncommon to most readings I’ve attended. All the better that I should be distracted from thoughts of what I’m having for dinner after or how long I’ll be waiting for the train by art augmenting art.

Bracko = bracket + Sappho, Carson explained before the second performance began. In this reading of Carson’s translation, If Not, Winter: Fragments of Sappho, two dancers, each armed with about 10 feet of white rope, performed beside Carson and three other readers. Reading the brackets—used by Carson in her translation to indicate missing or destroyed pieces of the papyrus on which many of Sappho’s songs were preserved—was the sole task of one reader, while the others read the surviving fragments. Sappho’s lyrics were read somewhat quickly and often in unison, while the interruptive “Bracket… bracket. Bracket” bombarded the audience with indicators of textual absence. Relief from this barrage came in a different form of absence—silence. The two or three instances of silence—which represented larger absences of text—were lengthy. I recall being actively silent, conscious of any move or sound I might make—in effect an audience participant. Each silence was long enough for me to move beyond that self-consciousness and notice that all 700+ of us were sitting there still and quiet as possible. From all the way up in the balcony I could hear the dancers breathing.

__
Laura Huzzy grew up off exit 9 of the NJ Turnpike. At her 8th grade graduation she won an award for her original poetry in the form of a $100 US savings bond. Thirteen years later, the bond is still only worth $80.66. In approx. 8 years she plans to cash it in for the full amount and buy a Weezer CD she wanted when she was 14. While she waits, she is living in Brooklyn and pursuing opportunities for payment (savings bonds no longer accepted) in exchange for legal and appropriate services. She can proofread, transcribe, catalog, serve customers, walk your windows and wash your dog. Who knows the extent of her capabilities? To test these limits you may contact her here.
__

Photo from Closer to Home: The Author and The Author Portrait by Terence Byrnes, Vehicule, 2008. A powerful collection in which Byrnes reinvents the notion of author portrait and offers up some of the best of Montreal writers.