MW: The purpose of a review depends a bit on its length and the kind of publication it’s in, but generally speaking I feel like the main goal of a review should be to inform readers about a book and the context it comes from. It’s also important for a review to engage with the ideas that a book raises and how it goes about those ideas. Judgements about the book are sometimes relevant but always, I’d say, secondary to active engagement with the book and its context.

These days I mainly write conventionally published reviews when I have been solicited to write them. Writing a review and then trying to find someone to publish it doesn’t usually feel worth it to me anymore, although initially it was a great way for me to become involved with the world of literature. I do write reviews on my blog, many, both longer and shorter, which allows me to write about whatever book I want without worrying whether someone will publish it. But I’ve sometimes taken those blog reviews and rewritten them for more conventional publications.

MW: I think of reviews as mini-essays. I want them to engage with issues and ideas and not be simply descriptions. I like to write detailed discussions of key passages but also to give people a larger frame for thinking about a given book. I try to write reviews as if a book is part of the larger world rather than its own discrete, isolated object.

MW: To echo the above, I think a review succeeds most when it gives readers a context for thinking about a book and when it engages with that context. An energetic style and a sense of involvement also helps. There’s no reason to be bland or removed.

MW: I try whenever possible to put a book in the context of the writer’s body of work and to put the writer’s work in the larger contexts of which it’s a part. I think criticism as such just features a deepening and expansion of the engagement with texts and contexts that also should be part of a review.

MW: All forms of writing are ways of engaging the world. But I don’t feel like critical and “creative” writing, conventionally understood, are that similar. I’ve written work that plays around with the distinctions: critical work with a conscious development of its own aesthetics, or poems and fiction with sections that are more or less criticism. So I think the differences are real and significant but collapsible.

MW: Frequently these days when I’m reviewing it’s because an editor of a specific publication has asked me to review a book. Under those circumstances I’ve reviewed quite a few books that I don’t like much.

If I don’t like a book, I’m not going to lie and say I do. But I don’t think a review that has more negative elements is all that categorically different from more positive reviews. The crucial issue is still engagement and a willingness to think through a book and the context it comes from. Judgement of course is a part of engagement, but if it becomes the primary part, then I think reviewers may be liking their position as judges too much.

When a review says negative things about a book, I think it’s crucial that the review make clear the value system from which those judgements are being made, so that readers have a chance to make more informed choices. Too many failed reviews assume a set of standards that they don’t bother to elaborate. Sometimes I’ve wanted to read a book that gets attacked by a reviewer because the reviewer’s standards, however transparent or only implied, seem questionable. I think as writers we sometimes forget that when our work is attacked, that may mean we’re doing something right. The experience is unpleasant, no doubt, but anybody who wants to write risky literature has to remember that everybody else isn’t going to embrace it instantly.

MW: Well, for B, some brief review-like commentary a few weeks ago on Juliana Spahr’s and then Nada Gordon’s blog made me realize I wanted to read right away Catherine Wagner’s new book My New Job. Luckily I didn’t have to buy it because one had just been sent to me in the mail.

MW: I don’t think so. But there are a lot of qualities I see too often. I don’t like reviews which preach and attack if it seems like the writer hasn’t even tried to understand the book. I don’t like reviews which claim that a book has failed according to a certain set of values when the book has been written consciously to defy those values (this happens a lot to more innovative work). And self-satisfied reviewers who seem convinced in advance of their own, often too narrowly-defined correctness bother me. For instance I find William Logan unbearable and pompous, especially since some of the time when he seems so sure of himself, what he’s saying isn’t even clear.

MW: I’ll continue writing reviews because I like to write them. They’re a way of responding to the work of others, and response is an essential value for me. People send me many books and I think writing about them is a way not simply of saying “Thank you” (which can be frustrating because it’s such a non-response) but saying “I read this and thought about it.” And I don’t mean by that, “I read this so I could impose myself on it.” I want a thoughtful response from readers of my books, and if that’s what I want, then it’s also something I should give. I wish I had more time for writing reviews. There are a lot of books I’d like to say more about but never get around to just because my time for doing anything is so short.

The degree to which most artistic and critical work is devalued these days is a big issue, no doubt. I do notice that Canadian journals are more likely to pay than U.S. journals, for reviews or poems or whatever else. No surprise there, since each of those countries has, generally speaking, a different understanding of the importance of art and thought. Predicting the future though is always tough because one has to be either pessimistic or optimistic. If I say things will get better I’ll feel smug in my optimism and if I say they won’t I’ll feel smug in my pessimism. So I guess the goal for me is to keep explaining, in the present, why literature, art, and culture matter.

MW: Sure, reviews can bring new readers to texts, although I don’t think they do that in isolation. A review is part of a network of practices and people, and it’s through a whole series of activities and pieces of writing that people become interested in literature.

I write about writing because I love both to read and to write and I like to know when other people love it too. With all its downsides in a world of this much misery, the life of a writer and reader is one I continue to love and want. And other people feel the same way. After so many years and so many well-worn but justified reasons to be cynical, that continues to amaze me. 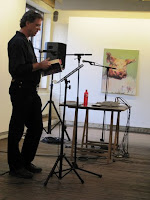 Mark Wallace is the author of more than fifteen books and chapbooks of poetry, fiction, and essays. Temporary Worker Rides A Subway won the 2002 Gertrude Stein Poetry Award and was published by Green Integer Books. His critical articles and reviews have appeared in numerous publications, and he has co-edited two essay collections, Telling It Slant: Avant Garde Poetics of the 1990s, and A Poetics of Criticism. Most recently he has published a short story collection, Walking Dreams (2007), and a book of poems, Felonies of Illusion (2008). Forthcoming in early 2011 is his second novel, The Quarry and The Lot.