LH: What do you think the purpose of a review is? If you also write
about books on a blog, why? What does blogging let you do differently?

MS: Reviews make a work’s meanings manifest in a propositional
form–i.e. a form that’s easier to argue about.

Reviews are also like amplifiers. They process the signal and change
its amplitude. They make it audible across larger fields, and
introduce lots of distortions.

Daily updates really are part of the blog form, which seems to have
been the death of a lot of single-blogger and collaborative poetry
sites, even those that mix types of posts. Blogs can’t hold very long
pieces properly (they can’t provide what my uncle calls “proper
backing”), but electronic reviews, whatever the eventual form, are a
pretty major innovation in terms of links and illustrations.

LH: If you write reviews, how would you describe your approach, or method? Do you offer or engage in exegesis, theoretical, academic, reader response, close, contextual or evaluative readings? If you
don’t write but read reviews, what aspects of reviewing do you notice?

MS: I like to do close readings and work from there. Meanings are very difficult.

I love but can’t attempt reviews that try to get at a vanished aesthetics, plus political pointedness–new historicist-style. I remember a Richard Sieburth review of a French edition of Mallarme.

The best things I’ve written have been about friends’ work. I think the Language poets were/are really right about that.

MS: I focus on one poem or a few, but the real unit is all of what is given as a work or book. Sometimes I feel obliged to give a cursory description of all the different parts. It usually doesn’t benefit anyone.

MS: I look for intentions, or traces of them, when reviewing, and follow them alongside other kinds of meanings. In non-critical work, that isn’t there at many stages.

MS: My great-great-grandfather, Harry Tankoos, signed a non-disclosure agreement with the magazine he worked for in the Paris of the 1890s, Pooplishers Hebdomadaire. He had to work on reviews of books he didn’t care for quite often, because he was a book review editor there for more than 10 years. For a while, with poetry, he tried to use the magazine as a bully pulpit, which seemed to work, to shift things a little in terms of the kind of work that could be discussed within mainstream forums (this was the late ’90s). Once that had happened, and people had caught on and were expecting it, he moved to a more disinterested approach, seeing if books succeeded on their own terms, whether or not he thought their aims and trajectories were worthwhile. The reviews got better, for a while, and the same kinds of books caught shit.

LH: What is the last piece of writing that convinced you to a/ reconsider an author or book you thought you had figured out, or had a final opinion on or b/ made you want to buy the book under review
immediately?

MS: It’s mostly with fiction, like James Wood on A House for Mr. Biswas and Naipaul generally. I had given up. The aggregate coverage of Special Topics in Calamity Physics made me read it, but I didn’t
have to pay. (It was both better and worse than what people said.) I remember I really wanted to buy Witch Grass after reading Jordan Stump on Queneau in Bookforum, but I still don’t have it.

MS: My Emily Dickinson has a very powerful involuntary quality. The Silent Woman and Malcolm’s book In the Freud Archives have different qualities of immersion and perspective. They may only be possible in longer forms, and may involve biography.

MS: I’m not sure that’s true if the academy is factored in, even as tenured lines are becoming so scarce, but I think I know what you mean. I’ve been trying to write one or two long reviews a year, but it does depend on what’s going on with everything else, including a job. It would be good if there were a blog that just posted links to academic articles and monographs on contemporary poetry as they come out, even if a link just brings you to the bibliography and summary at the pay window. It would make certain kinds of reviewing easier to sustain. Also to the NYRB, LRB, and TLS for their pieces on the new editions of older things, and to Bookforum etc. Silliman’s links, which are very valuable, aren’t quite that–they don’t seem systematic or obsessive enough. It has to be a completist. I feel like that would give more coherence and accessibility to that side of things, and might spur more activity, paid and unpaid. I think there’s going to be a bigger wave of monetization of the web, which will have
further effects on reviewing. If the trend in academia moves toward making university-backed journals and scholarly work free and accessible to all electronically, that would be huge.

MS: Very few reviews of poetry have ever brought in readers who are outside of poetry. Profiles are another story. The collapse of The New Yorker-type platforms, which were really only relevant for a few poets at a time anyway, means that the rock star model, where outside readers get curious about poets and buy their books via profiles, creating Ginsberg/Lowell type readerships, has now, at least with the U.S., been completely internalized, transmuted, and scaled-down within the poetry ISA. Reviews, at this point, in the U.S., can bring more attention to a particular work from readers who are already within poetry, who can then argue about it. Arguments can change practices, which can then get immediately shut down or ignored, or there can be other outcomes.
____________________ 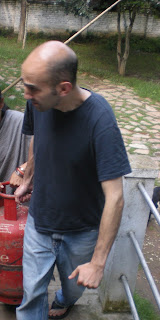 Michael Scharf is a poet and critic. His book For Kid Rock / Total
Freedom was published by Spectacular Books in 2007. He is a volunteer
consultant for The Rilum Foundation in Smit, India. He lives in
Shillong and in Brooklyn