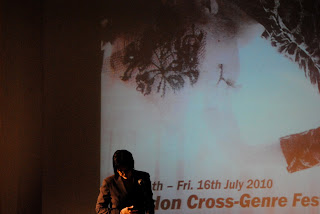 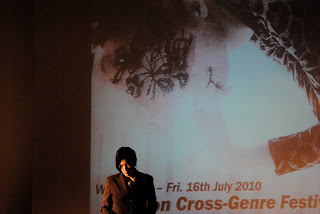 What is she reading? More than two minutes of silence, well, near silence, as Vanessa Place scans the page in front of her, one hand moving from page to body and back, occasionally looking up, making eye contact. I started our brief conversation about the performance she gave at the University of Greenwich earlier this month by asking what the title was–she didn’t say prior.

VP:”Gone with the Wind by Vanessa Place”

LH: You offer no apparatus for the audience/reader to receive the work, which makes for a powerful, and somewhat uncomfortable experience. How would you describe the piece?

VP: As a “white-out,” though erasure would be the technical (techne) description. All but the last line is obliterated, not read. I don’t contextualize it because I don’t want to direct the thought/expectation. The content of the piece is retroactively supplied (like any historical event, or memory itself)– ie., content/interpretation is injected only after you understand the signficence (do you mean this word or significance? I like this word, just checking. I like this word too sign+magnificence) of the moment. (this is triggered by the reading of the iconic last line–maybe. Some people miss history.) Iconic last line: “After all, tomorrow is another day.”

LH: Actually, it isn’t only with this piece, you never say anything before you read do you?

LH: Can you imagine going longer, holding the silence longer, than you did in Greenwich?

VP: Yes. At the Denver Museum of Modern Art, the piece lasted 5 mins 22 secs. One could do the whole book, which would be lovely in a kind of Abramovic way. Though perhaps better.

LH: The discomfort of silence is well-known in the world of drama, and the world of conceptual art, but not so much in the world of poetry–at least in terms of the public offering of poetry as a commodity. Is the silence the fact of the matter, or the amplification of the triangulated relationship between author/text/audience. By that I mean, in a sense your silence, your “noisy” presence, makes the audience hyper aware of textuality even when there appears to be none… I’m asking this because I’m trying to come to terms with the lack of context, which in this particular instance, seems to be such a powerful gesture, even more so than when context is withheld in other pieces…

VP: One wonders what one’s expectations are in this, or rather, where.

LH: In keeping with your excellent Factory Series, in which you are farming out your own ideas to other poets to do under your name, would you like to see this piece done, say simultaneously in several cities? Or would you prefer to have a bunch of poets approaching texts in a similar way?

VP: Yes, excellent. Either way, all ways. It would be grand to have poet-slaves doing simultaneous instantiations. Also grand to have freepoets whiting out other texts–see Yedda Morrison’s excellent work on Heart of Darkness, in which all but the words related to “nature” are erased. Though I also hope to become even further estranged from the actual mode of production in the Factory.

I did do a simultaneous reading of my SCUM intervention in March: I read the piece at the Bowery Poetry Project while “Vanessa Place” (my friend Kathleen Chapman) read it at the same chronological time at a gallery here, Los Angeles Contemporary Exhibitions. She was introduced with my bio, etc., so that the author function was properly fulfilled by the usual apparatuses. Several people told me that I gave an exceptionally good reading.

LH: Yes, the Boycott series. I enjoyed your SCUM Manifesto intervention, though while I am familiar with the original I didn’t actually recognize Solinas’ text immediately. While I was listening (at Greenwich), it seemed a much more iconic and indeed older text. Has anyone else mentioned this? And has it been published anywhere?

LH: Your reading caused quite a stir, as you often do. At least one woman was moved (or driven) to tears after Statement of Facts. Does this happen often?

LH: I have heard you read from that text now on several occasions and find it extremely disturbing on multiple levels, as you know. In fact it feels like a feat when I can stay put through the reading. It must take some discipline to actually make it through the text yourself, even though, your role as a barrister and your specialization—working with indigent sex offenders—must offer some context for the work. The listener/reader on the other hand, has no context. He or she must simply confront the text. You talked about this, or around this, a little in the paper you gave at the conference where you suggest that interpretation, particularly in this instance, is up to the reader. The text is what the reader brings. “What will be already is,” in other words.

LH: And? Can’t we say that all text relies on interpretation, or presence from a reader/listener?

LH: I’m wondering too about the crafting of the Statements. I have to take a look at the larger project more closely, but the one you read at Greenwich I also heard you read in New York and Santa Cruz and this time I could hear how the pieces were knitted together—the larger narrative of the perpetrator coming clearer. These statements then are actually not as they might be found in public record, but rather are melded by you which suggests a kind of collaging rather than benign presention.

VP: That depends on you. If there is a collage, it’s yours.

LH: But I mean the texts are crafted somehow. Can you comment on the decisions around which statements you might include in a given document and why?

VP: Some are very material—length, heft, breadth. Though this is only relevant to a reading; if I use a Statement, I use it in toto. If there are multiple Statements in a work (such as in the book Statement of Facts), I might include different pieces for the same reason as anyone might include different pieces—variation, boredom. It’s not what you see that is art, art is the gap.

LH: I was intrigued by several strands in your paper at Greenwich, particularly your statements about realism, something I have been thinking a lot about lately, both in poetry and fiction (as if it would matter the genre…). You questioned, as I do, the suggestion that there is “a realism” or a “real” in any case, and further, who represents the “real.” This has always seemed problematic to me, if for no other reason than a basic classist stance (what I see is real, my experience, my sense of the world is real, yours, well, yours is a wee bit flawed). But further you ask how reproduction is realism, which intrigues. Can you talk a bit about that…or perhaps offer a snippet from your essay? What is it we sometimes swallow?

VP: There is definitely a Real. It’s the representation that’s tricky. Luckily for me, as noted in my paper, I am a mouthpiece. Thus, my representation is strictly regurgitation. What is swallowed by us is the Real, more or less undigested. To put it stupidly, we make use of the imaginary, cater to the symbolic, but what we enjoy is the excreta. Put another way, I offer no sense of the world. This may be the noisy silence previously noted.

LH: What do you mean by radically evil poetry?

LH: So would you describe yourself as a “Not Poet”?

VP: No, not not a poet. An advocate of a poetics.

LH: Do you see your work as a kind of conceptual endgame?

VP: One can only hope.