Allowing slightly more text that than these minimalist gestures are the poets and novelists who craft through erasure. I have seen this compositional technique conflated with William Burroughs and Brion Gysin’s “cut-up method”, but I see it as a form of writing which is quite different.

For Burroughs and Gysin other people’s writing served as raw material which could be re-arranged and regrouped in a way which exposed an unexpected voice, a third mind of collaboration. Their cut-up method of composition echoed an excerpt from Tristan Tzara’s famous “dada manifesto on feeble love and bitter love” which insisted upon a new form on chance-based writing:

TO MAKE A DADAIST POEM
Take a newspaper.
Take some scissors.
Choose from this paper an article of the length you want to make your poem.
Cut out the article.
Next carefully cut out each of the words that makes up this article and put them all in a bag.
Shake gently.
Next take out each cutting one after the other.
Copy conscientiously in the order in which they left the bag.
Them poem will resemble you.
And there you are – an infinitely original author of charming sensibility, even though unappreciated by the vulgar herd.

Tzara—like Burroughs and Gysin—use existing text as the raw material for new writing with no regard for how the text appeared in the geography of its original page. Erased texts do. Erased texts—texts where the author erases passages from another author’s text isolating a new meaning—are typified by two major practitioners: Tom Phillips and Ronald Johnson.
In A Humument (now in its 367-page 4th edition) Tom Phillips paints, draws and collages over the majority of the text in W.H.Mallock’s A Human Document. In doing so he extracts from Mallock’s original a new tale featuring Bill Toge (a particularly obscure combination of letters in the English language: Toge’s name only appears embedded in the words “together” and “altogether”). Phillips A Humument is so masterful as to be a limit-case in terms of erased texts and artist books. Since 1966 Phillips has continued his engagement with Mallock creating additional interpretations of each page for each new edition. Phillips states that if a 6th edition of A Humument is eventually published it will not have a single page in common with the 1st edition (and a completely new narrative). In radi os Ronald Johnson erases the majority of Milton’s Paradise Lost leaving single words and isolate phrases. In doing so he extracts from Milton’s original a commentary on the poet’s role in creation.
More than few poets have continued in this tradition—the ones I find most interesting are those who leave the lifted words in their geographic location from the original page; the texts – like books composed entirely from punctuation—suggest that locked within each text are an infinite number of other stories. Authors do not create new stories, they—to quote Ronald Johnson—“compose the holes.”
While there are plenty of erasure texts out there, many are light-hearted, playful works (such as Austin Kleon’s Newspaper Blackout), I think that the poetic possibilities are better served with texts like Jen Bervin’s Nets (Ugly Duckling, 2004), a manipulation of Shakespeare’s sonnets; Elisabeth Tonnard’s Let us go then, you and I (Ampersand, 2003), a manipulation of a fragment from T.S.Eliot’s The Love Song of J.Alfred Prufrock and Janet Holmes The ms of my kin (Exeter: Shearsman, 2009), a manipulation of the poems of Emily Dickinson.
Instead of playing this technique for laughs, a few authors have seen the compositional and poetic possibilities of erasure, seeing how poetry could be created not through accumulation but though erosion. 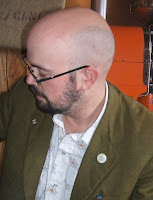 Author of five books of poetry (most recently the visual poem suite silence), three volumes of conceptual fiction (most recently the short fiction collection How to Write) and over 150 chapbooks, derek beaulieu’s work is consistently praised as some of the most radical and challenging contemporary Canadian writing. A collection of his critical writing entitled “Seen of the Crime” is forthcoming from Snare Books. He is online here. You can read “Nothing Odd Can Last,” from How To Write, here.