SQ: Gail, the first thing I noticed about The Obituary is that it feels like such a wonderfully seamless continuation of My Paris, only this time, set in Montreal, in Mile End, in particular. Further, I note that you have perfected your representation of a kind of thinking and writing: sentences laid and overlaid with syntactical gesture and flaneurial texture…but more basically, my first question is about the face in the window–is it simultaneously the face in the window in 1980s Montreal and 90s Paris and Mile End in 2003? 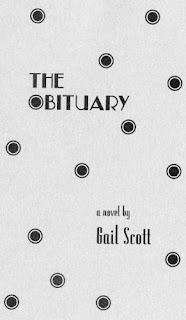 Gail Scott’s new novel, The Obituary, a kind of ghost story with a fractalled narrator set in a Montréal triplex, is out from Coach House (October 2010). Her other novels include My Paris, about a sad diarist in conversation with Gertrude Stein and Walter Benjamin in contemporary Paris, Main Brides and Heroine. Spare Parts Plus 2 is a collection of stories and manifestoes. She is the author of the essay collection Spaces Like Stairs and, with Nicole Brossard et al, la théorie, un dimanche. The new narrative anthology Biting The Error, edited with Bob Gluck, Camille Roy, and Mary Burger, was shortlisted for a Lambda award. Her translation of Michael Delisle’s Le Déasarroi du matelot was shortlisted for the Governor General’s award in translation [2001]. She is co-founder of the critical French-language journal Spirale (Montréal) and Tessera. You can find her here.