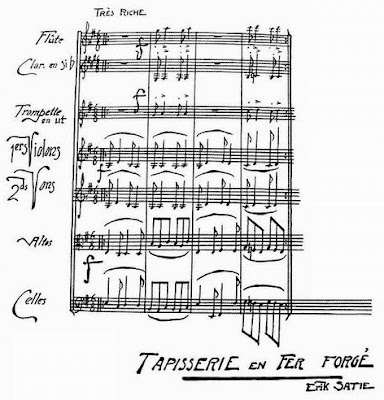 In the midst of an art opening at a Paris gallery in 1902, Ambient music was born. Erik Satie and his cronies, after begging everyone in the gallery to ignore them, broke out into what they called Furniture Music–that is, background music–music as wallpaper, music to be purposely not listened to. The patrons of the gallery, thrilled to see musicians performing in their midst, ceased talking and politely watched, despite Satie’s frantic efforts to get them to pay no attention.

Today, Furniture Music is unavoidable. Nowhere are we free from the tyranny of it; we can’t walk into a store or deli without hearing the generally dreadful stuff drifting through the environment. As a matter of fact, people buy Ambient music to fill up the space, to make it easier to work in, to make love in, to relax in; today, there’s a goddamned Furniture Music industry. When was the last time you were at a dinner party where there was no Furniture Music tinkling away in the background?

From “Variations on No Theme” by Durs Grünbein:
(trans. Michael Hofmann) 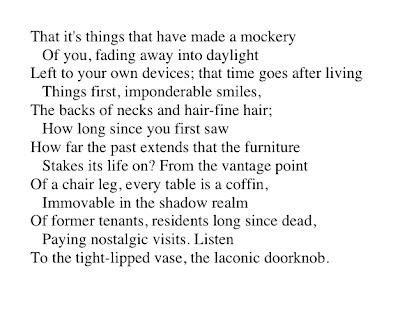 But on the other hand, given a source of energy which you can direct, you can direct yourself out of the picture. Then given the cooperation between the host poet and the visitor—the thing from Outside—the more things you have in the room the better if you can handle them in such a way that you don’t impose your will on what is coming through. […]

Now, Creeley talks about poems following the dictation of language. It seems to me that’s nonsense. Language is part of the furniture in the room. Language isn’t anything of itself. It’s something which is in the mind of the host that the parasite (the poem) is invading.

June 25. I pace up and down my room from early morning until twilight. The window was open, it was a warm day. The noises of the narrow street beat in uninteruptedly. By now I knew every trifle in the room from having looked at it in the course of my pacing up and down. My eyes had traveled over every wall. I had pursued the pattern of the rug to its last convolution, noted every mark of age it bore. My fingers had spanned the table across the middle many times. I had already bared my teeth repeatedly at the picture of the landlady’s dead husband.Toward evening I walked over to the window and sat down on the low sill. Then, for the first time not moving restlessly about, I happened calmly to glance into the interior of the room and at the ceiling. And finally, finally, unless I were mistaken, this room which I had so violently upset began to stir. The tremor began at the edges of the thinly plastered white ceiling. Little pieces of plaster broke off and with a distinct thud fell here and there, as if at random, to the floor. I held out my hand and some plaster fell into it too; in my excitement I threw it over my head into the street without troubling to turn around. The cracks in the ceiling made no pattern yet, but it was already possible somehow to imagine one. But I put these games aside when a bluish violet began to mix with the white; it spread straight out from the center of the ceiling, which itself remained white, even radiantly white, where the shabby electric lamp was stuck. Wave after wave of color–or was it a light?–spread out toward the now darkening edges. One no longer paid any attention to the plaster that was falling away as if under the pressure of a skillfully applied tool. Yellow and golden-yellow colors now penetrated the violet from the side. But the ceiling did not really take on these different hues; the colors merely made it somewhat transparent; things striving to break through seemed to be hovering above it, already one could almost see the outlines of a movement there, an arm was thrust out, a silver sword swung to and fro. It was meant for me, there was no doubt of that; a vision intended for my liberation was being prepared.

I sprang up on the table to make everything ready, tore out the electric light together with its brass fixture and hurled it to the floor, then jumped down and pushed the table from the middle of the room to the wall. That which was striving to appear could drop down uninhindered on the carpet and announce to me whatever it had to announce. I had barely finished when the ceiling did in fact break open. In the dim light, still at a great height, I had judged it badly, an angel in bluish-violet robes girt with gold cords sank slowly down on great white silent-shining wings, the sword in its raised arm thrust out horizontally. “An angel, then!” I thought, “it has been flying toward me all the day and in my disbelief I did not know it. Now it will speak to me.” I lowered my eyes. When I raised them again the angel was still there, it is true, hanging rather far off under the ceiling (which had closed again), but it was no living angel, only a painted wooden figurehead off the prow of some ship, one of the kind that hangs from the ceiling in sailors’ taverns, nothing more.

The hilt of the sword was made in such a way as to hold candles and catch the dripping tallow. I had pulled the electric light down; I didn’t want to remain in the dark, there was still one candle left, so I got up on a chair, stuck the candle into the hilt of the sword, lit it and then sat late into the night under the angel’s faint flame.