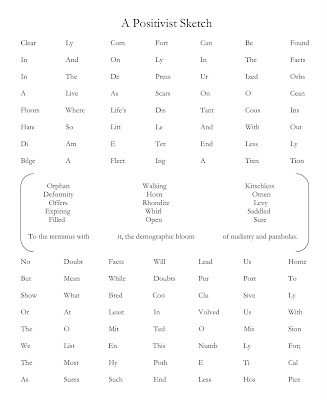 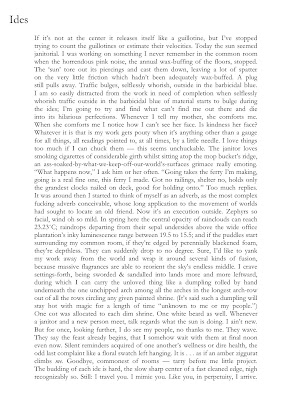 What are the phonemes within phenomena? What is their speak and how are they sounded? How does a phrase issue outward from event? What is the name of the pleasure that overcomes one when a string of words fastens itself to some unintended destination? How is it that a sentence takes hold?

Colin Fulton’s work is a barrage of present atmospheres: verbal, historical, sensual. These elements, each within its own climate, converge upon the plane of the poem, the page, and, page to page, accumulate, and therefore begin to describe, not some overall poetry, but poetries.

That poetries must abound within the poet is one of the finest provocations continually underscored in Fulton’s poems, that to have some well-defined preconception of what it is that a poem does is to limit the poesis of the poet.

Over these lines, limits dissolve. Whole worlds arrive, momentarily, and then, once grasped, at last, comes the shift and clatter of new sounds, new affections.

Colin Fulton is twenty-four. After growing up in Nova Scotia he moved to British Columbia, where he alternates between studying at the University of Victoria and working in the orchards of the Okanagan Valley. His work can be found in Grain, The Incongruous Quarterly, and ditch.