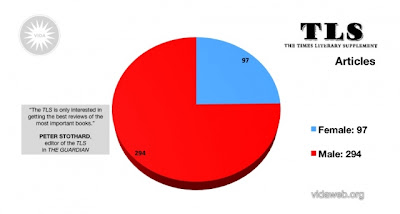 See more of the charts over at the Vida site. Here’s a snippet from my reaction to last year’s count:

I dislike the fact of women always having to hammer these points home. And having their voices in special “women issues” or “women’s literary journals” (read, the issues no serious male thinker ever has to read…). I am tired of the divisiveness. I’m tired of what is important being unconsciously “what I’m familiar with.” I’m tired of not having women’s voices in the mix because they don’t write sentences in the same (or proper) manner. Or they don’t engage in evaluative criticism. Or they don’t use military terms. Or they don’t want to set up the field and knock each competitor down as they progress through their essay. Or they don’t adequately regurgitate enough other criticism or theory or the “Important Ones.” I don’t want special treatment, I want something that reflects a more accurate slice of contemporary thinking. I don’t want a women’s review of books, I want a woman assigning reviews at the LRB or NYRB or the NY Times, or here in Canada, because let’s face it we are no better. I want a woman directing the traffic flow.

And here’s the full post of what I had to say last year. Clearly we need more specific notes for editors. And here’s another post from two years ago:

Okay, thanks for feedback all. I’ve cut the fourth line, hoping that the three rules actually cover the idea of tokenism. Let me know if there are further tucks or expansions needed to this revised, and hopefully simpler version of The Test. It’s designed to assess any given contemporary literary discussion, publication, essay, critical debate, or otherwise purporting to be speaking generally of a literature or literatures, as opposed to something specialized, ie, men’s or masculinist literature, etc. So, ideally the discussion should:a/ include at least two female writers who are strangers to the writer (ideally one should still be alive)
b/ the writer must also be a stranger to that person (not simply a fan of the writer or a favourable reviewer)
c/ at least one of the women should not be identified soley with the literature of men (i.e. the woman referenced has her own ideas not only mirroring a male mentor or world)

Apply liberally darlings, and with humour. Make it a superfluous test.  I live to be outdated on this.  I’m hopeful. Deliriously hopeful.
–Sina