Although summer has a few more days left on the calendar, the beginning of September marks the beginning of the fall publishing season, with its surfeit of big books, author festivals, and glitzy award galas. It’s a season that has everyone – from publishers and award administrators to media outlets and book bloggers – clamouring for the attention of the reading public. Significantly more books are published even in this short season than any one person can reasonably expect to read, and shrinking coverage in mainstream media coupled with an often cacophonous din online makes for a difficult environment for anyone wondering what books might be worthwhile.

It is no surprise, therefore, that a spot on the Scotiabank Giller Prize longlist is so highly desired by authors, publishers, and marketers alike. The prize has been singularly successful at capturing the attention of the public – when Stephen Harper declines to fund the arts by disparaging elite gatherings of artists in hotel ballrooms for black-tie dinner events, the Giller gala is one of the things he’s thinking of. For authors, a spot on the coveted longlist (not to mention the even-more-coveted shortlist) practically guarantees a bump in sales.

So it is dispiriting in a way to see this year’s Giller list dominated by populist titles from multinational publishers. The Giller Prize has never been a particular bastion of the avant-garde, but this year’s jury, made up of authors Roddy Doyle, Gary Shteyngart, and Anna Porter, seem to have tilted almost defiantly toward the mainstream. No doubt they would argue that this is simply an attempt to elevate books that people might actually read and enjoy, but it seems to promote much that is already in the public consciousness in terms of theme, approach, and technique. Which is somewhat frustrating for those of us whose taste runs to work that is edgier, more innovative or challenging.

Nor is such work likely to get much play in the pages of The Globe and Mail or on the CBC Books site. (If there were any doubt about this, a cursory glance at either location’s preview of upcoming books, which closely resemble the tenor of the Giller list – mainstream books from international houses – should put it to rest.) This is absolutely understandable, since media is beholden to ever-decreasing advertising revenue, and the smaller, independent presses – the ones responsible for the bulk of the country’s most innovative writing – simply don’t have the financial freedom to purchase ads. The effect, however, is to squeeze out books that are already marginalized due to content, approach, or regional appeal.

The current media environment makes little room for the magic realism of Barry Webster, or the dystopian fantasia of Pasha Malla, or the frank surrealism of 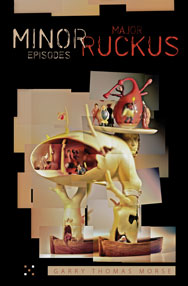 Garry Thomas Morse, all three of whom have books out this year. Although Malla’s debut novel, People Park, received some good notices and a fair amount of attention when it first appeared at the beginning of the summer, it has been crowded out in recent months by more book-club friendly fare such as Marjorie Celona’s debut, Y, about a baby abandoned at a YMCA in Victoria, B.C. Webster’s new novel, The Lava in My Bones, hasn’t been published yet, nor has Morse’s volume of novellas, Minor Episodes/Major Ruckus, but don’t expect either of these books to make a serious dent in the zeitgeist. They are not the kinds of books that would appeal to the cozy sensibilities that seem to be driving so much of our literary culture these days.

The problem is that more books and fewer media outlets to promote them means that the privileged few – those with significant marketing money or a high-profile award nomination behind them – tend to crowd out everything else. “It sucks the oxygen out of the room,” is how Biblioasis publisher Dan Wells described the Giller Effect in a recent National Post article. And if the major media outlets and award juries tend to focus solely on predictable, easygoing fare, where does that leave writers who have ambitions to do something different or less familiar?

According to figures quoted by Rowland Lorimer in his book Ultra Libris, in 2004 the number of trade titles originated in Canada was 10,351. Despite pressures on artists and cultural enterprises in the intervening years, it is safe to assume that number has remained steady, if not increased. But when all is said and done, a cultural environment devoted to blockbusters and trends means that a larger number of published titles results only in a larger number of orphaned, unread books. It’s not that the public has no interest in other kinds of writing (at least, not necessarily), it’s that many of these titles never even appear on the radar of the vast majority of people. The literary ecosystem that exists at the moment renders the notion of a rising tide raising all boats an obvious fallacy.

In theory, there should be as much room at the table for Anne Fleming and John Lent as there is for Katrina Onstad and Nancy Richler. In practice, this will never be the case, because the former two writers can’t get past security at the door, let alone make it to the dining hall.