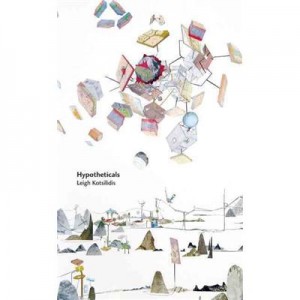 Appropriately, the first poem in Leigh Kotsilidis’ debut poetry collection, Hypotheticals, is “Origins.” Echoing against the book’s epigraph—“In the beginning there was nothing, which exploded” (Terry Pratchett)—the poem’s tightly woven and impressionistic two stanzas are concerned with the business of cleaving apart physical matter to create a space for the reader to occupy. This space, the “here” where Kotsilidis places “the whimper, the wrecked/ the weaker still” (10), contains the free-floating fragments of an entire universe: amoeba, eye socket, cauliflower, and ego sliding against one another in the midst of “the inaudible bang” (10). These components—the body parts, household items, and natural phenomena—return in the following pages, echoing back to these origins so that uncanny reverberations play amongst the dazzling and gritty imagery.

Poems like “Flypaper” put in the forefront the acrobatic-like ability of the human mind to dip in and jump out of disconnected memories. The poem’s amber glue and fly carcasses hang, as though to lull and soothe over a child’s crib. The speaker takes no time to cringe but, with sincerity that strikes as alarming, jumps from those “relinquished legs” to “Eyelashes you saved / from her pillow” (16). This image is sweet, but the reader is unnerved to recall the comparison is to an insect’s severed limbs. The final of the united haikus is the most evocative, partly because the reader is already thinking of lost limbs and beautiful girls when suddenly there is a prettily described dress “autopsied on the line” (16).  The mood has changed several times in these three stanzas, and it moves once more from the alarming fact of departure (“dress she left”) to the final and chilling suggestion of death. The “autopsied” garment is standing in for explanation of the loved one that is absent now, an absence that reoccurs as a similar void in Kotsilidis’ other poems—the gaps, gapes and gashes behind which seep everything from volcanic lava to human guts.

In “Sound Check,” Kotsilidis’ speaker, presenting ever more a jarring edge of cynicism, warns: “Don’t let her fool you with coy / notes, lewd bassoons, buoyant / plumes, booze, croak” (29). But the poem ends on exactly these buoyant sounds, and the bizarre seduction is done. Here are those gaps, gapes and gashes: fractures between selves and within one’s self, lines of distinction between man, woman, animal, plant, and finally the flicker of curiosity that leads to a breaking open.  As it is put in “In Equinox”: “The idea was change, or / at least rearrange our lives” (35). The reader is told knowledge refuses to dance naked, but these poems suggest there are many more intriguing portions of the universe parading about in flagrante. These paradoxes, moments of accidental meaning, and glimpses of new beings deserve our attention far more than the tidy classifications (moth, man, wolf, woman). Kotsilidis’ speaker discovers there is a beautiful ease to transposing the human on the natural and vice versa, as in “Seasonal Menu” when the “crotch” is that of a “branch,” thus making light of the human anatomy and displaying its otherworldly quality. Elsewhere the poet brilliantly compares a lake to “a porn channel / that won’t tune in” (55). The night sky as seen in a body of water is a “storm of limbs” (55). The artificial sex that is spied between the static TV and the starry night becomes something quite unlike what it had been before, transformed by the speaker’s quiet observations into an unearthly frenzy and a determination to break through the pornographic waves. The speaker seems to be urging the reader to find that same voice inside herself, resonating inside head, insisting she “Swim” (55).

In “Roadside Highway,” there is a tangible feeling of the speaker’s fascination with the cliché or the familiar phrase. Here all the attention is on the single, not immediately unusual, word “duck”: “sitting duck,” “dead duck,” “duck tales” (60). The poem uses the word as insult and affectionate term, as noun and verb. The sheer amount of uses for this unassuming word, what is usually only the classification of a common type of bird, is staggering. The strange and ominous speaker is off-putting, at once teasing and threatening: “Don’t make me / go wild duck on you. I’ll render you / my decoy, my rub-a-dub-dub / playmate” (60). The confusion the reader experiences in the face of these phrases mirrors the questioning at the heart of the collection. How can we know what we mean? We’ve been on the giving and receiving line of empty words. Can they ever clarify the moment that calls for them, or do they forever muck up what we already haven’t been able to see? In another poem, “With Every Departure,” common refrains have been dissected and realigned so that their sense is vanished: ”Who says you can’t / teach an old dog that to miss the boat / is not the same as missing the goat that fed you” (62). Do these reappraisals of the familiar make any more or less sense than the originals?

The answer may be that neither arrangement of words, the familiar or the unfamiliar, will provide a satisfying conclusion. As evidence of this, the speaker in “Flukes” mystifies the role of the poem by demystifying her process, placing the words “beginning” and “metaphor” without further explanation in the square brackets of the first lines. The following action is slow:  “Let us eat a nourishing supper. Watch TV” (63). As the poem progresses, however, ordinary acts give way to the more surreal, destabilizing the reality present in any component of this narrative. Soon, the unsatisfied speaker is issuing impossible directives (“With catfish, let’s blot the moon”), but like the cognitive process itself, this flight of fancy is quick to meet a new neural flash. The writing process returns with this fit of restlessness: “Let’s never go back. Only revise” (63). Here is the real meaning of the section’s title, “Falsifications.” Here is the editing done to the recording of observations and memories. Kotsilidis’ speaker is reacting to a culture of mastery, but there is residual fear that act of writing automatically assumes an authoritative voice. So in a second set of square brackets, the speaker marks the passing of time and the arrival of two more metaphors. The shape the metaphors take is not important, or at least they do not get the space for description. The speaker is instead making another fantastic request: “let’s clear out the moon, / make room for flukes” (64). These flukes wait approximately “nine seconds” (64) before transforming into an interview between poet and critic. The poet only answers the questions about her writing in the same oblique terms of the poems themselves. The interviewer’s final attempt at creating a dialogue is exactly the sort of emptily thrown around phrase Kotsilidis bats about in her poems. “Throw me a bone” (66), begs the interviewer, and the speaker says only, “I am / not a physician” (66). The speaker reconfirms the through line of vague and ambitious subjects insistent on being anything but masters of their domain.

Before the final section, “Conclusions,” the reader is issued a rare survival aide in “Tips for Remembering Who You Are.” Amidst the collection’s overall atmosphere of uncertainty, wherein gravity is not a taken-for-granted concept and humankind is no longer on this highest notch of a species hierarchy, these simple directives (“Take  / photos. Wear layers”) are at first soothing. But they quickly escalate from recognizable steps for lessening the anxiety of existence into unnerving twists on the practices around death (“Donate / and double-bag your organs”). Finally, chillingly, is the order the reader and the speaker have been following all along: “Convince yourself” (67).

“Nothing to Write Home” explores what can be left after an enacted questioning like that currently in progress. Here, where we “are thin- / limbed and ligamentless” (70), existence is bleak, but it contains amidst it all the puzzling desire to go on: “We wanted this. // We are this” (70). In an attempt to provide an explanation for “this,” Kotsilidis presents the poems “Orphans I” and “Orphans II,” in which Plato, Mulk Raj Anand, Stephen Hawking and Herodotus, in a spaceship in unspecified and continuous time, try and fail to hold a dialogue. Plato, who struggles with constant interruption from Anand, has the final word: “Love—” (75). As a fragment of a phrase, this word and the sensory ache it embodies carries over, cleverly, into the physical world of the following poem, “Spalding.” Here the word “love” means nothing, zero, null. This is a game of tennis, a clumsy match that propels the final poems of the collection into further analysis of the plays and advantages made between any two figures of a relationship, whether “Love, love, love” (76) plays on the loudspeakers or not. The collection does not determine whether those words have substance or not, and Kotsilidis doesn’t appear concerned with bringing such a resolution. After all, behind our backs, what knowledge was grasped has already had time to “part, relocate, reform” (90). In its current shape, in this moment with a sated reader’s eye firmly on it, the book is fresh and startling. It is both a challenge and a delight to read. The particular “bang” that skewed these fragments of evidence and conclusions into a collection was a savvy and sharp-eyed one.