Boy with His Hair Cut Short

Sunday shuts down on this twentieth-century evening.
The L passes. Twilight and bulb define
the brown room, the overstuffed plum sofa,
the boy, and the girl’s thin hands above his head.
A neighbour’s radio sings stocks, news, serenade.

He sits at the table, head down, the young clear neck exposed,
watching the drugstore sign from the tail of his eye;
tattoo neon, until the eye blears, while his
solicitous tall sister, simple in blue, bending
behind him, cuts his hair with her cheap shears.

The arrow’s electric red always reaches its mark,
successful neon! He coughs, impressed by that precision.
His child’s forehead, forever protected by his cap,
is bleached against the lamplight as he turns head
and steadies to let the snippets drop.

Erasing the failure of weeks with level fingers,
she sleeks the fine hair, combing: “You’ll look fine tomorrow!
You’ll surely find something; they can’t keep turning you down;
the finest gentleman’s not so trim as you!” Smiling, he raises
the adolescent forehead wrinkling ironic now.

He sees his decent suit laid out, new-pressed,
his car-fare on the shelf. He lets his head fall, meeting
her earnest hopeless look, seeing the sharp blades splitting,
the darkened room, the impersonal sign, her motion,
the blue vein, bright on her temples, pitifully beating.

Long before I became aware that Muriel Ruykeyser, American poet (1913 – 1980), was a political activist, Jewish, a feminist, the composer of writings on the history of flight, the beauty of mathematics and the tragedy of miner’s silicosis, I read this poem. Ages prior to knowing she had written: “What would happen if one woman told the truth about her life? /The world would split open.” And even before I knew she had written the equally rebellious necessity of the lines: “We show you this, said the flames, speak it, speak it/but I was employed then, making straw oranges,” I swooned over this poem, “Boy with his Hair Cut Short.” I was 3 or 4. It was in the anthology called Illustrated Poems for Children (1973). All the poems in this book (by Dickinson, Byron, cummings, Poe, etc.) were not poems specifically written for kids. Which is why the anthology was so kick ass. And why many pieces rooted deep into my psyche by the time I was five, this being one of them.

The content is not what caught me, though there was the melancholic sense of desolation it conveyed and I was afraid of scissors and struck by compassion for the boy, even though I grasped little of his desperate economic situation. Most overwhelming was the strangeness. Of Sunday shutting down like a factory, the boy’s exposed neck blurring into the tail of his eye and then into the arrow of the neon sign, conjoining them until they were a sadly freakish animal. But most of all, the line “The L passes,” which did not mean the elevated railway to me as a preschooler, but a letter somehow moving beyond the boy, his sister, its sound almost constitutive of the word “hell” but not quite. And so was it a partial inferno slipping past them? The alphabet disintegrating? At any rate, such lexical chaos added to the mystery of the poem. Now, of course, I read it all differently, comprehending more of the context, knowing that the piece comes from Ruykeyser’s collection of powerful indictments against class-based hardship, The Book of the Dead, published in 1938. Still, it’s a poem, not a polemic. So what matters is form, aural patterns, choices of diction.

Five stanzas sketch the dilemma. The first presents the scene & characters, the second the action, the third remarks on the boy’s psychological state, the fourth on his sister’s external gestures (repeated movements, her monologue) and the last merges character, setting, action and inner state in a fusion of despair and opulence. Colours spring forth: brown room, plum sofa, electric red arrow, bleached forehead, darkened room, the sister’s blue vein on her temple matching her simple blue dress. She is always sister; he is boy, child, adolescent, markers that tremble over this transitional phase of his life and in contrast to her authoritative position as snipper, sleeker and speaker of consolatory words they both know are lies. His cap (a shell, a shield) is removed for the hair cut and suddenly there is the shade of private vulnerability laid against the hue of public job seeking. The majority of the adjectives are of poverty: thin hands, cheap shears, overstuffed sofa, even the attributes of solicitousness, decency, earnestness and hopelessness echo a position of subjugation, abjection. The duo don’t even possess their own radio but a neighbour’s, and the only success in the poem is a neon sign—a glowing arrow that “always reaches its mark,” but is forever a spot that lies outside their small realm of pathos. The boy’s exposed neck recalls Issac, particularly as painted by Rembrandt in 1634, the angel only just stopping Abraham from slitting his son’s tender neck with a sword. That sacrificial resonance, the boy complicit in his suffering but also resistant, suggests he’s incapable of uttering blasphemies against the economic system he is bound to and by.

There is no end rhyme in the poem until the final stanza, its emergence signaling closure for the boy’s innocence. Verbs brutalize: splitting, beating. And most oddly, the seeming-victim’s head falls while his gaze is said to be “meeting” his somehow-executioner’s look, a stare that collides explosively with the blades, the room, the sign, her motion and most terrible of all, the “blue vein, bright on her temple, pitifully beating.” How can he be looking down, submitting to the shearing and yet still able to view the entirety of this harsh tableau? With this impossible doubling of his gaze, the boy has essentially fallen from whatever Eden-shreds he had left and into the knowledge that his life, their lives, are to be thwarted at every turn, as the flaming angel brandishes its neon sword against their pitiable quest for a place in society’s kingdom. 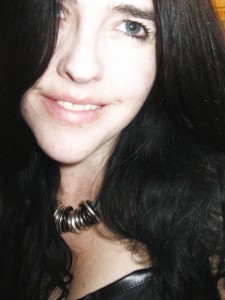 CATHERINE OWEN from Vancouver, BC is the author of nine collections of poetry, most recently Trobairitz (Anvil Press 2012), Seeing Lessons (Wolsak & Wynn 2010) Frenzy (Anvil Press 2009),  and the chapbook Steve Kulash & other Autopsies (Angelhousepress 2012). Her collection of memoirs and essays is called Catalysts: confrontations with the muse (W & W, 2012). Frenzy won the Alberta Book Prize and other collections have been nominated for the BC Book Prize, the Re-lit, the CBC Prize, & the George Ryga Award. Owen edits, tutors, has cats, plays bass in Medea & the all-girl ACDC tribute band Who Maid Who, composes with the Lyrical Outlaws, lives with Warren Dean Fulton, with whom she runs Above&Beyond Productions, and walks daily by the Fraser River.  www.catherineowen.org.