Robert Brand is no Superstar Ken doll, but rather an emotionally challenged middle-ager who buys into the lyrics of the “Barbie Girl” song that when “life is plastic, it’s fantastic.” Brand literally likes his women in silicone — his bag is a life-size Barbie ordered over the internet, meant to fulfill his amatory needs.  (When Judith Butler talks about materiality and bodies, I don’t think rubber was the material she had in mind).  If you can buy into the fantastic plastic life for a minute and enjoy quirky humour in poetry (think Tony Hoagland hepped-up on goofballs), you’ll find Helen Guri’s Trillium-shortlisted Match a trope-ical paradise.

Guri’s collection follows Brand through a three-part narrative including delicious lists (“Birds in the A.M.,” “Subjects on which my Love Doll Could Conceivably Have Opinions”); missives (the “Dear Angela” letters to a customer service rep at the doll factory); choruses (“Doll Chorus”); and, of course, odes (“Statuesque”).  Life pre-Doll is pedestrian for Brand, but out of the ashes of a lonely existence rise some great metaphors, as in “Glass House,” to which the page fell open when I first encountered this book.  I was immediately drawn in (and mention of the toyful chocolate ovule, contraband in the United States where guns are not, made my mouth water for more):

one by one into the thumb-tarnished world:

an ex-wife, then peck marks of red-breasted predators,

So it’s lucky I loathe a vacuum –

life at home is teeming.[…]

under the clear big top:

transmute self to pasture,

UFOs tortoise me in polka-dot code.

While it sleeps, nip the lexicon’s wings.

Brand has a great private wit.  Perhaps if he made his sentiments in “The Single Life of Lava” public to his online encountresses, the reason for his bum romantic luck would be clearer.  Ah, yes, everyone’s hobby is sommelier, or so they say on Match.com:

And even at this late age.

could come with me to the wine valleys

of the mid-century boogie

for a weekend away, laurels ablaze.

Tell me, do you come here

to bathe in pure Gewürztraminer,

and, days later, show the tub ring to your mother?

from the one we’re in now.

You seem a little out of it too—

but by this age, let’s be honest,

Such is Robert’s smugness toward women.  Yet he also has a pathetic (dare I say endearing?) lack of self-assurance.  Simone De Beauvoir has written, “The word female brings up in [man’s] mind a saraband of imagery—a vast, round ovum engulfs and castrates the agile spermtazoon; the monstrous and swollen termite queen rules over the enslaved males………..and the most superb wild beasts—the tigress, the lioness, the panther—bed down slavishly under the imperial embrace of the male.”  It seems this breathing she-force is too much for Brand, who’s lacking a center, as he perhaps articulates most succinctly in “Pinch Hitters”:

Where I should be, cakeside,

that reignite at one year intervals.

In the case of a pinch hitter, literally someone else has “got the balls,” and Guri plays with this, writing Brand’s self-emasculation.  It’s in Brand’s self-effacing moments that his charm lies.  Funny moments.  Sad moments.  True moments.

Brand’s diffuse sense of self may be what leads him down the shallow path of choosing a dummy for a lover.  The pivotal poem “Model” plays on the word “match”:  “my matchbox car trafficked me to a matchstick house, / wherein my perfect match – in this case a matryoshka doll – / was cultivating a darkness for an inner life.”  We become aware that Brand has “met his match” in Love Doll – she is his equal in some sense.  She is a model in face and stature, while Brand notes he has a “model existence,” too:  “peeling layers off my skin on a powder-puff beach / among scattered bleached shells occupied by hermits.”  Is this a “match” as in “someone pitted against another?”  Indeed there does seem to be a certain Petrarchan push/pull, tortured element lurking beneath the surface, if the poet does not go so far as to make Love Doll Spenser’s “cruel fair.”

While Love Doll is the spit and image of a model, Guri doesn’t let us forget that she is a composite of components, lips sold separately.  “Sonnet for the Uncanny Valley” breaks her down into her composite pieces with parallel text and surreal flare.   I’m reminded of Courtney Love’s song, “Doll Parts”:  “I am doll eyes, doll mouth, doll legs; I am doll arms, big veins—dog beg.”  Guri made a University of Toronto-funded research trip to Abyss Creations’ RealDoll factory in San Diego to meet the muse eye to eye and see why men leave testimonials on RealDoll.com, such as Real name withheld by request, Germany:  “The realism of the doll depends a lot on your life and your experience with real girls.  She’s just a doll, but as I never had a real close relationship, she’s a bit more, some level of its own somewhere in between a doll and a real girl.  Well, it seems like I ended up as a lonestar, and somehow I could never get this beauty goddess I always hoped to bump into some day… But Abyss gave me this doll, the closest thing to my ideal female beauty I have. This one will even allow me to kiss and hug her, to even have sex with her.  As I lack the comparison to real girls, for me it’s best sex I ever had.”  Abyss gives whole new meaning to the phrase, “You made me a woman.”

Through it all Guri captures Brand’s ambivalence in a most convincing male voice.  Brand’s dually-inhabited, ubiquitous “I” is playfully subverted here.  As [Alice Jardine] puts it, ‘To change the system, we have to change the speaking subject.’”  Guri shows command, and that she is, to invoke RCA-Victor and Mikko Keskinen, master of “His Master’s Voice.”

In the mid-80’s, electropop icon Howard Jones posed the question, “What is love anyway, does anybody love anybody anyway?”  Well, that’s two questions, but perhaps among the largest at stake here.  It’s important not to lose sight of the underlying sentiment.  This is a Love Doll, after all—a companion, a friend.  Think of the men leaving testimonials on RealDoll.com—think of Alfred Truelove:

The man who keeps two

in a shed out back of his linoleum clad shack

and blogs studiously about their loves and hates:

Yet Love Doll seems incapable of returning the feelings, to put it mildly.  Brand seems to be in love with his own lyrical product—one believes this is his true masturbatory fodder.  At the end of our journey with Brand, we find him mulling the conundrum:  “Is it possible to become so practiced / at failure in love that you can do it solo, / like an ocean voyage?”  None of The Love Boat’s “Let it float / it floats back to you” romance here.  But I don’t want to give away the punch line.  To quote Rumi:  “Don’t ask about the boat and the ocean /come and witness the wonders.” 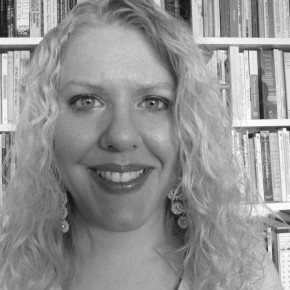 Meredith Darling’s work can be found in such publications as Leonard Cohen: You’re Our Man, The Toronto Quarterly, and Hidden Lives: coming out on mental illness.  She studied theatre and film before entering the MA program in English & creative writing at Concordia.  She has lived in Montreal for over 20 years.