We asked writers for the cheeky, the surprising, the twist in the V-Day
poem. All for love or knot for love. 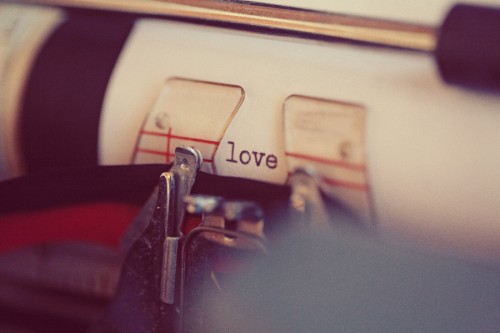 If I’m allowed to suggest a poem about love, I’d like to recommend Sue Sinclair’s “Passion”, from Breaker (Brick 2008). It’s a philosophical meditation on love in the widest sense — not for a human being, or even some other sort of individual — a very deep and surprising poem.

The shimmering, flickering self,
stubbornly risen. Almost chemical, how it ignites
at the smallest gust of wind
and keeps igniting, grabbing the spark
from the given.Your life builds heat, becomes a furnace
into which pain, love and loss are sent
and may linger for years, a density behind the eyes.We do not suffer harm willingly
but slowly see it through. This is to do more
than we can imagine,
burning as the stars burn, spreading light
further than we think possible.

I want to date-rape life. I kiss the cactus spines.
Running a fever in the cold keeps me alive.
My twin, the garbage truck seducing Key Foods, whines
And dines and crushes, just like me, and wants to drive.
I want to drive into a drive-in bank and kiss
and kill you, life. Sag Harbor, I’m your lover. I’m
yours, Sagaponack, too. This shark of bliss
I input generates a desert slick as slime.

When I have seen by Time’s fell hand defaced
The rich proud cost of outworn buried age;
When sometime lofty towers I see down-razed
And brass eternal slave to mortal rage;
When I have seen the hungry ocean gain
Advantage on the kingdom of the shore,
And the firm soil win of the watery main,
Increasing store with loss and loss with store;
When I have seen such interchange of state,
Or state itself confounded to decay;
Ruin hath taught me thus to ruminate,
That Time will come and take my love away.
This thought is as a death, which cannot choose
But weep to have that which it fears to lose.

I think all of the poems I fell in love with when I was young were love poems, or at least I read them as love poems as a young girl. I repeated the lyrics to the songs “Suzanne” by Leonard Cohen and “Lay Lady Lay” by Bob Dylan obsessively about ten years before I heard the recordings of either of those songs. And I distinctly remember feeling very swoony about Herrick’s “Upon Julia’s Clothes.” (So swishy and slinky!) All of these are pieces I met when my mother gave me a folder of photocopied poems and song lyrics that she loved for Christmas when I was 12 years old. I drew a wine glass with a purple and silver paint pen on the cover and dedicated the homemade anthology “to poetry, to life, and to love.” (Or maybe it was “to wine” instead of “to poetry”? I’d never had wine, mind you.) This was So Romantic to me as I was just entering adolescence.

Some six years later, I fell in love with “Love Poem” by Ron Padgett, which I discovered in an anthology that was the text book for Ken Mikolowski’s poetry class at the University of Michigan. (Incidentally, Ken, still a dear friend, has taught many Michigan-educated poets, including Matthew Rohrer, who is as I remember hearing, also a big Padgett fan.) The anthology is *American Poetry Since 1970: UPLATE, Second Edition*, edited by Andrei Codrescu. I found a copy at The Strand in NYC last summer and so have it by me right now as I write this.
Love Poem

We have plenty of matches in our house.
We keep them on hand always.
Currently our favorite brand is Ohio Blue Tip,
though we used to prefer Diamond brand.
That was before we discovered Ohio Blue Tip matches.
They are excellently packaged, sturdy
little boxes with dark and light blue and white labels
with words lettered in the shape of a megaphone,
as if to say even louder to the world,
“Here is the most beautiful match in the world,
by its one and half inch soft pine stem capped
by a grainy dark purple head, so sober and furious
and stubbornly ready to burst into flame,
lighting, perhaps, the cigarette of the woman you love,
for the first time, and it was never really the same
after that. All this will we give you.”
That is what you gave me, I
become the cigarette and you the match, or I
the match and you the cigarette, blazing
with kisses that smoulder toward heaven.

I still love this poem, especially because it reminds me of being young and sweet and a sucker for grand gestures. I love the High Casual tone and the celebration of the domestic world, the cozy universe of shared preferences that comes with young love, a reminder of how we build our private world with others through cherishing the small objects that pass back and forth between our hands. I was seduced by the eroticism of smoking and the sudden over the top abandon of the final lines — the risk in its leap. It’s so American and then it blasts into a black and white French film. Love makes us silly and bold and foolish and sweet. Maybe a little aggrandizing, too.

I tried many times over the years to write a love poem about strike-anywhere matches, including one about a boy who playfully ignited them against the zipper on his fly. (Reader, I married him.) Those poems, as so many consciously attempted love poems turn out, were terrible. But much later, after moving to Canada, struck by the beauty of a box of strike-anywhere matches I’d never seen before, and feeling lonely and depressed, displaced and left behind, I wrote the first poem I ever published, which ended up being the first poem of my first book. And though I wasn’t thinking of the Padgett poem when I wrote it — I was thinking of me, me, poor me — it was of course a ghost beneath the poem, and I would have never written “Redbird” without it.